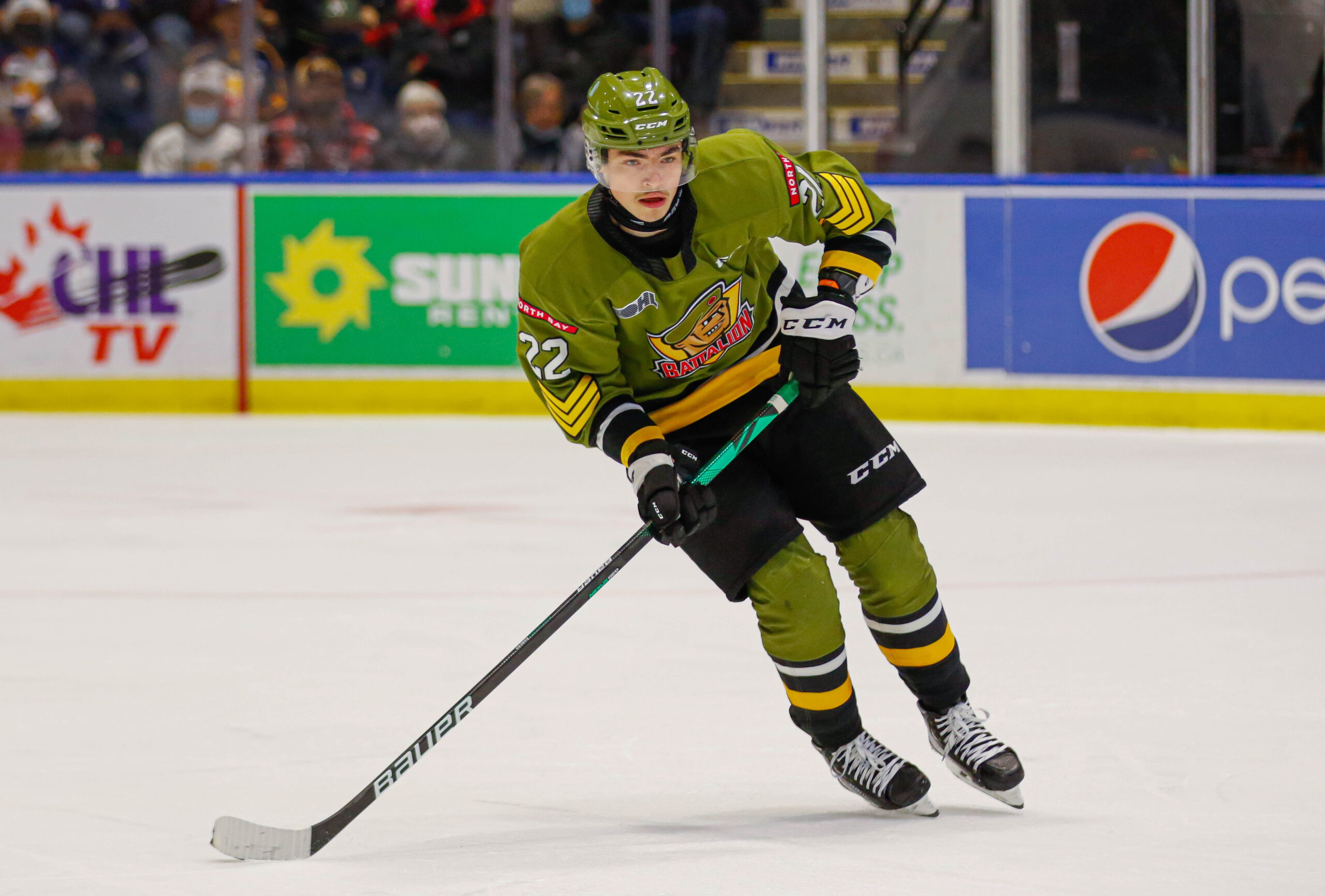 From 2009- 2013, the Edmonton Oilers were in constant pursuit of big players who played a heavy game as they tried to match the blueprint of Stanley Cup-winning teams. They were hoping that one of Cameron Abney, (6-foot-5), Ryan Martindale (6-foot-3), John MacCarron (6-foot-3), Bogdan Yakimov (6-foot-4) and Mitchell Moroz (6-foot-3), would fill that void.

However, from 2013-2015 the team shifted their focus to defensemen. They stockpiled defensive prospects, including Darnell Nurse, Caleb Jones, Ethan Bear and John Marino, who turned into serviceable NHLers.

As the game continues to evolve, so do the Oilers’ needs. In the last two drafts, the team sought out players with offensive potential that could round the lineup alongside their core players. Three of those draft picks have been lighting the lamp — Carter Savoie, Matvey Petrov and Xavier Bourgault— and find themselves atop of their league’s goal-scoring race.

The Oilers drafted Carter Savoie 100th overall in the 2020 NHL Draft. Savoie is smaller at 5-foot-9, but he’s been a proven goal-scorer at every level; in his draft year, he scored 53 goals in 54 games with the Sherwood Park Crusaders in the Alberta Junior Hockey League (AJHL). He was ranked 65th overall by the draft experts, so he was considered a steal when he fell to the Oilers at the 100th spot (from, “Edmonton Oilers Draft Local Kid Carter Savoie With 100th Pick in Draft,” Edmonton Journal, 10/7/20).

Savoie had a fabulous freshman year at the University of Denver and showed his innate ability to put the puck in the net, registering 12 goals and seven assists in 22 regular-season games. He led all rookies in shots (77), game-winning goals (3) and was named to the NCHC All-Rookie Team.

This season, he’s off to a blistering start. In 10 games, he has 10 goals and 17 points. His 10 goals rank second in the National Collegiate Athletic Association (NCCA) scoring, and he’s tied for sixth in points. On Nov. 13, Savoie scored two goals in 20 seconds, becoming the third-fastest player to score consecutive goals for the Denver Pioneers.

At 6-foot-2, 181 pounds, Petrov is best known for his shooting ability and willingness to unleash it. He’s a pure sniper who loves to set up for a one-timer on the power play, with a lightning-quick release (from “If this late-round draft steal pans out, Edmonton Oilers can thank Toronto Maple Leafs GM Kyle,” Edmonton Journal, 09/20/21).

His move to North America was delayed by the pandemic, but the wait was worth it. He was impressive in his Ontario Hockey League (OHL) debut, recording a hat trick, one assist and eight shots on goal. He continues to impress with 12 goals and 21 points through 16 games. His 12 markers rank third in OHL scoring, which is a spectacular feat considering it’s his first year playing full-time on a North American-sized rink.

While Petrov was projected to be a third-round pick, perhaps due to the pandemic and limited viewing from scouts, he fell to the Oilers in the sixth round. Still, he’s emerging as a legitimate prospect, and he signed an entry-level contract with the club on Nov. 10, 2021. As writer Brian Swane noted, he could be the steal of the 2021 NHL Draft.

The Oilers selected Xavier Bourgault 22nd overall in the 2021 NHL Draft from the Shawinigan Cataractes of the Quebec Major Junior Hockey League (QMJHL). In the shortened pandemic season last year, he produced 20 goals and 20 assists in 29 games (a 1.37 points-per-game average (P/G)). The scouting report on Bourgault from The Athletic’s Scott Wheeler indicated he was a prolific point producer with a deceptive release and good playing instincts inside the offensive zone (from, “NHL Draft’s Top 100 Prospects- Michigan Players Top the 2021 Rank,” The Athletic, 06/22/21).

Bourgault earned his first taste of professional hockey this season when he played in two preseason games with the Oilers. The team saw his quick release in action when he received a pass from Derek Ryan, shot it in a hurry, and beat Calgary Flames goaltender Adam Werner. He registered a goal and an assist in the preseason but was eventually returned to his junior team.

Bourgault has dominated this season. He leads the QMJHL in both goals and points with 15 goals and 30 points in 16 games (1.8 P/G). He had a hat trick most recently on Nov. 13, and he was named the QJMHL player of the month for October. His tremendous start should garner serious consideration for Team Canada at the World Junior Championships in December.

All three prospects — Savoie, Petrov and Bourgault — are on a torrid scoring pace, sitting atop the NCAA, OHL and QJMHL. They are one-shot scorers with hard and accurate shots. Having said that, there is no guarantee that their offensive prowess will translate to the NHL level. Still, teams depend on entry-level contracts to fill their roster in the cap era and between these three players, the Oilers have stockpiled a nice collection of goal scorers who could one day bury the puck off of a Connor McDavid or Leon Draisaitl pass.