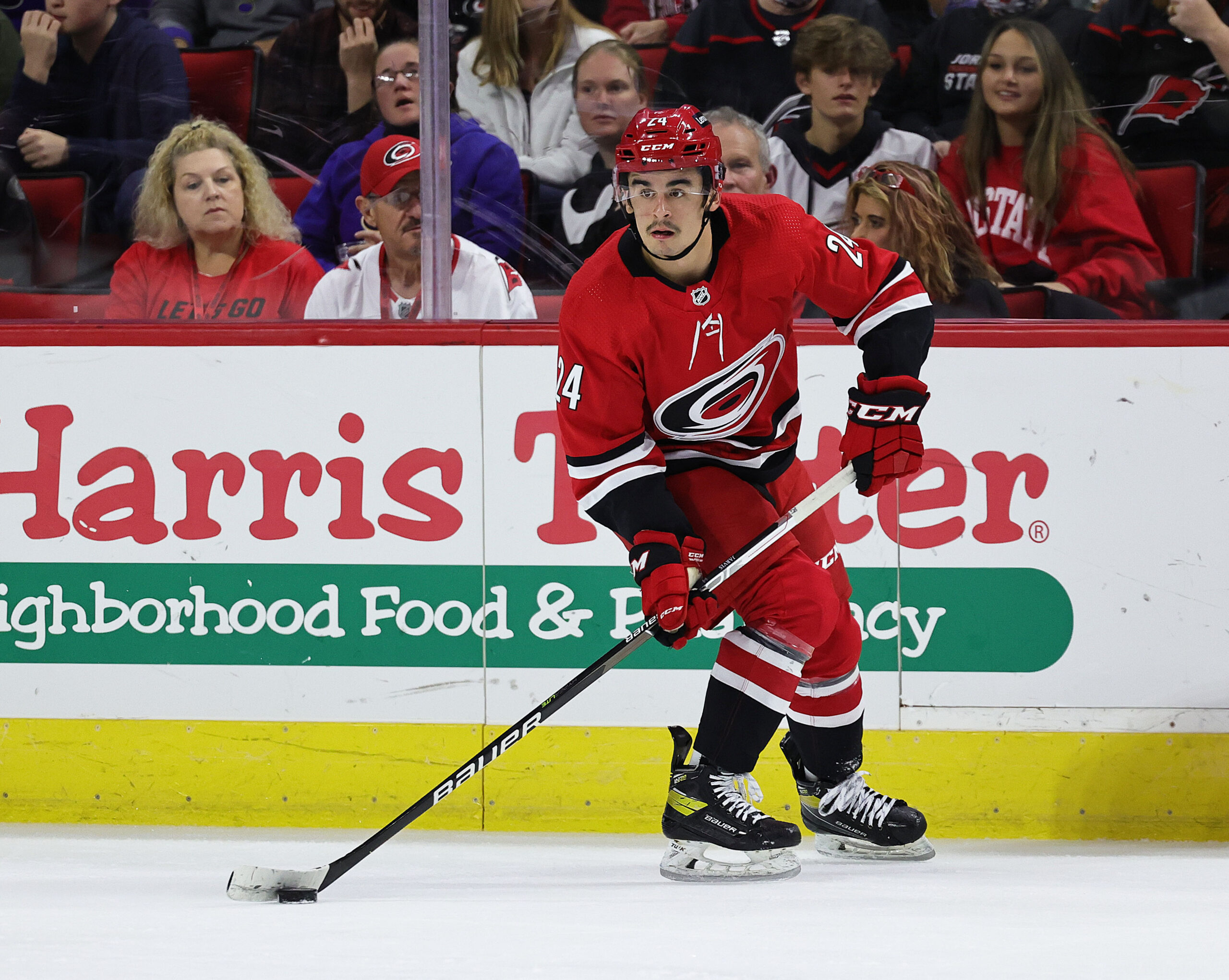 The Carolina Hurricanes began their six game road trip with a 4-2 win against the Vegas Golden Knights on Tuesday night. Antti Raanta was in net for the first time since his injury against the Florida Panthers on Nov. 6th. Even though he let in two goals early, he stood tall between the pipes for the rest of the game, coming up with huge saves that helped the Canes steal two points, and the win they needed to stay at the top of the Metropolitan. Hurricanes rookie Seth Jarvis has been playing far beyond his years and after a string of disallowed goals, he finally was able to get the puck to the back of the net.

Over the coming month, the Carolina Hurricanes see the longest road trip they have had since before the pandemic ended the 2019-2020 season early. The Hurricanes have not played the three California teams in a little over two years. In the next month, they will be playing eleven of the next fourteen games on the road with one six-game western (and Philadelphia) roadie, and a northern road trip that will include the central and western Canada teams as well as Minnesota. What does this mean for the Canes? Can they continue this record-breaking season and come back to Raleigh still at the top?

Going Back to Cali

The next stop on their trip to the Wild West is to see Wild Wing and the Anaheim Ducks. The Ducks are an equally strong team who could easily give the Hurricanes a run for their money currently sitting at a 10-4-3 record. At the time of writing, forward Troy Terry is currently on a fifteen-game point streak, and with their Tuesday night win against Washington, the Ducks have won eight straight. This is their longest win streak since they went 11-0 between February 13 to March 5, 2016.

Captain Ryan Getzlaf recorded his 1000th point in the franchise’s 1000th win during Tuesday night’s match up. On the Canes end, Andrei Svechnikov has at least one point in twelve of Carolina’s fourteen games so far and he’ll be hungry to keep that streak up. As of November 17, Svechnikov is sitting at ninth in the NHL for points with a total of 18, while American Terry is fourth with a total of 21. On the defensive end, Tony DeAngelo with the Canes and the Ducks’ Kevin Shattenkirk are both tied at fourteen and will be wanting to keep their points extending upward. Cam Fowler of the Ducks is right on their tail with thirteen points.

The Kings have been on streaks lately, both of the winning and losing variety keeping them at a record of 8-5-2. They had a six-game losing streak that was promptly followed with a seven-game winning streak. Saturday’s loss against the Winnipeg Jets may have snapped the win streak, but it kept the point streak alive as the loss was handed to them in a 2-3 overtime loss.

The Kings are improving their game this year, holding steady at third in the NHL behind Carolina (1.93) and Calgary (2.13) for goals per game (2.73). The game will be the second of the Kings seven-game home stand. While the Canes will be playing games every other night on this trip, the Kings will get a two-day break between Wednesday night’s game against Alexander Ovechkin and the Washington Capitals and the Hurricanes. It could give them time to rest after what is certain to be a tough game. The last time that the Capitals visited the Kings, Ovechkin scored a hat trick, and given that Ovechkin and Evgeny Kuznetsov are having a strong season, they will give the Kings a run for their money.

The Way to San Jose

The Sharks were hit hard by COVID-19 protocols in the past few weeks with seven of their players and their coach all going out due to the protocol. Now that all seven were back for Tuesday’s game against the Minnesota Wild, the question comes on how well that time away will affect the chemistry between the players. At the time of writing, they are 8-6-1 on the season.

Their Tuesday night game saw them getting a 4-1 win against the Wild, a big change from Saturday’s 2-6 loss against the Colorado Avalanche. They are currently sitting at sixth out of eight in the Pacific Division and like the Kings, will be facing off against the Capitals two days before the Canes come into play. The teams has been in the headlines a lot recently between being affected by COVID and the Evander Kane incidents. While Kane will not be returning to the line-up anytime soon, head coach Bob Boughner will be playing around with his lines to see what works best with their full roster back in action.

First Visit to the Seattle

The Kraken have a less than stellar start to their inaugural season sitting at 4-10-1 with a meagre 9 points, tied with Ottawa, but are still six points ahead of the Arizona Coyotes who have a lowly five points. At the helm of the Kraken is former Hurricanes General Manager and team captain, Ron Francis.

THW’s Sean Raggio recently took a dive into the in consistences that they are facing. This could mean that the Hurricanes will have an easy last game of their west coast tour, but if the Kraken are able use home ice to their advantage against the red hot Canes, it could boost their confidence. It will be the first time former Hurricane Morgan Geekie will be playing against his old club. The meeting also will see former Hurricanes play-by-play announcer John Forslund, calling against the team he spent nearly thirty years with. Last year, Forslund signed a deal with the Kraken to become their play-by-play announcer beside JT Brown.

From Sunny California to Philadelphia

To end the first half of their road trip, the Hurricanes move into Philadelphia to take on the Flyers. The Flyers added the human form of beloved mascot Gritty during the offseason in the form of Ryan Ellis. It was hoped that the gritty defensemen would be able to elevate their blue line, but injuries have side-lined him. The Flyers have been able to go 7-4-2 on the season, giving them a respectable sixteen points, but it was far from what they hoped when they acquired the veteran Ellis from Nashville.

THW’s Bobby Bader recently wrote on how they lack options for a replacement that could play up to the high standards Ellis has put out. The lack of strong defence could help the Canes end their trip with a win. While it was the Flyers who handed the Canes their second loss of the season, it will only make them hungry to make a comeback and get a W.

If how the Canes played against Vegas is a glimpse of things to come, the team should come back with several more wins under their belt. They will play one game against the Capitals at PNC Arena on November 28th before heading out again for a short trip to Dallas. One thing we do know for certain is that this is a strong squad. They are showing that they are capable of having a season to rival the 2005-06 squad who went 52-22-8. It was that squad, headed by their now coach, that brought the Stanley Cup to Raleigh.

Hi y’all, my name is Casey Bridge and I cover the Carolina Hurricanes for THW. Even though I am Steel City born, a former season ticker member with the Lightning, and live in Orlando, I’ve been a huge Caniac for as long as I’ve watched hockey. I started my hockey career as Keeper of Time for the California University of PA Vulcans hockey club during university, but I took up the writer’s mantle after moving to Orlando. Hope to one day work in with Hockey Ministries International as a chaplain. You can usually find me tweeting about hockey @Cas_Bridge or posting hockey and cat pictures on @caseybridge.