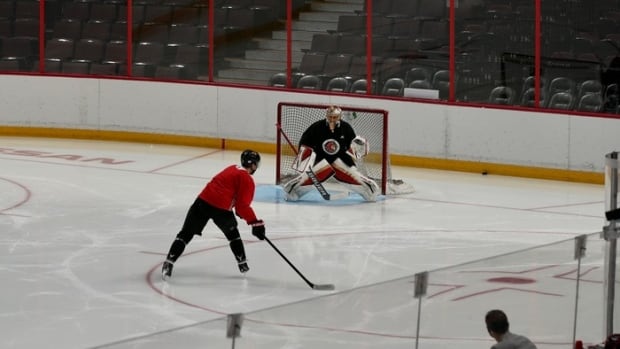 The Ottawa Senators held their first practice at the Canadian Tire Centre Saturday after the National Hockey League (NHL) postponed the team’s games earlier this week following a COVID-19 outbreak.

Earlier in the day, the team announced that eight players, as well as the assistant coach, had been given the green light to return to the ice.

“For the most part, every one of us has grown up wanting to be in hockey your whole life and this is what we do,” said head coach D.J. Smith at a press conference following the practice.

“Through August to hopefully June, you want to be at the rink and it’s been an unfortunate time where we had to be shut down, but it’s great to be back.”

The NHL postponed 51 games for virus reasons during its last regular season.

The Senators are expected to play their upcoming game against the Colorado Avalanche Monday.

The game against the New Jersey Devils, originally scheduled for Tuesday, Nov. 16, has been rescheduled for Dec. 6, the league announced on Friday.

“We’re just lucky that no one had it really, really bad or no severe things have happened,” Smith said, adding he hopes to put the outbreak behind them.

”During this time, we’re just going to move forward and continue to get better every day,” he said. ”There’s no point in thinking about the negative stuff. We just want to get back to playing hockey.”