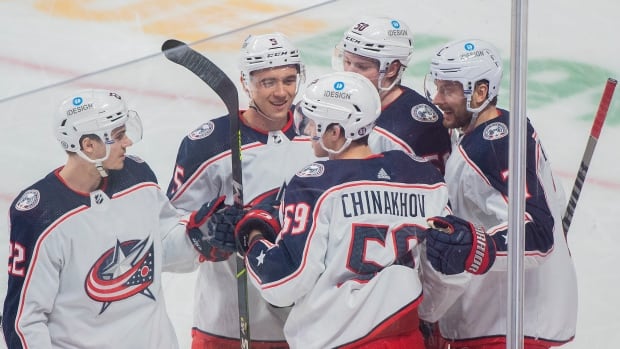 Patrik Laine scored twice and Joonas Korpisalo made 32 saves as the Columbus Blue Jackets doubled up the league-worst Montreal Canadiens 6-3 on Sunday in Montreal.

Artturi Lehkonen had a goal and two assists for the Canadiens (8-29-7), which dropped their sixth straight encounter. Nick Suzuki and Tyler Toffoli each had a goal and an assist.

Montreal coach Dominque Ducharme pulled his starting goaltender from the game for the third straight encounter.

It started well for Montreal, which opened the score 1:19 into the game when Suzuki grabbed his own rebound and used Nyquist’s skate to ricochet the puck into the net.

WATCH | Blue Jackets put on showcase in win over Canadiens:

Columbus scores four goals in the first period and goes on to defeat Montreal 6-3. 0:56

The Blue Jackets responded with four unanswered goals in the game’s opening 13:14 — a franchise record

Laine tied the game up at 3:51 — his first of the contest — using Alexander Romanov as a screen to notch a swift wrist shot from the face-off circle.

Roslovic then surprised Montembeault at 8:39 with a top-corner shot, giving Columbus its first lead of the night.

Ducharme decided he saw enough from his starting goaltender when the Jackets scored their third of the night, shorthanded. Robinson found himself on a breakaway and easily connected for his sixth of the season.

Columbus finished its productive first period when Chinakhov zoomed past Cale Klague and beat Primeau with his fifth goal of the year.

Montreal cut the deficit to two goals with 41 seconds to go in the second period. Lehkonen found Toffoli on a one-timer to give the Habs a fighting chance at a comeback.

Lehkonen wasn’t done there and grabbed a short-handed goal of his own 6:55 into the third. The Finn tapped in a saucer pass from Jake Evans to bring the Habs one goal away.

But the Canadiens would not get any closer.

Sillinger shifted momentum back on Columbus with a wrist shot from the left face-off circle at 9:58 of the third before Laine added an empty-netter.

The Canadiens have conceded 26 goals across their last four losses.

Canucks’ Goaltending Is the One Area That Doesn’t Need to Be Addressed
“That is wacky!” | Weird NHL Vol. 36
Hamilton tops Shawinigan in OT, advances to Memorial final
Who wins Game 6 of the Stanley Cup Final? Paths to victory for Avs, Lightning
When Nazem Kadri hoisted the Stanley Cup, he lifted a whole community along with it