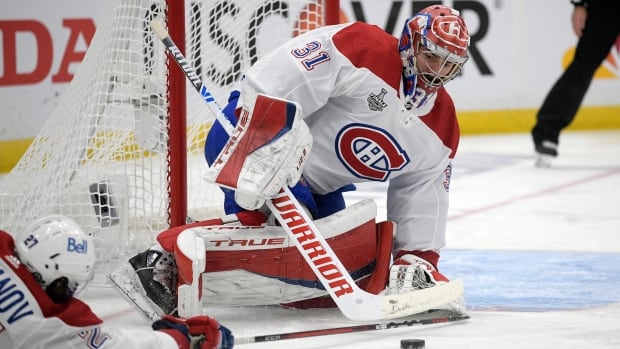 While Carey Price faced a series of challenges since the 2021 Stanley Cup final that kept him off the ice and away from his teammates, the star goaltender knows he wants to keep blocking shots for the Montreal Canadiens in the near future.

Price spoke to reporters on Sunday for the first time since the Canadiens lost in the final to the Tampa Bay Lightning.

He says there have been “unforeseen setbacks” as he’s worked his way back from off-season knee surgery, and while the process has been frustrating, he’s continuing to move forward.

He says his goal is to play NHL hockey this season.

“It’s a big part of my identity,” Price said. “Being a goaltender for the Montreal Canadiens has been my life for over a decade.

“Ending the season on such a disappointing note last year, I just want to be able to get back in there, continue playing and to be able to put that sweater on again. It’s something that’s keeping me motivated at this point.”

The 34-year-old skated in full equipment Saturday and Sunday but has not played a game since the Habs lost Game 5 of the Stanley Cup final on July 7.

Price says the next few weeks will most probably “determine the rest of my season.”

“That’s why I’m a little bit anxious for the next couple of weeks, it’s going to be interesting to see how my knee responds,” said Price. “I’m hoping for the best. I obviously want this to go well and if I have another setback, I’m just gonna start over again. That’s the only option that I have.”

‘I’ve had quite the journey’

Price also spoke about his decision to voluntarily enter the NHL’s player assistance program last fall, saying he’s “very thankful” for the help he received. He has previously said he entered the league’s program for substance abuse.

Price added that he was “tremendously grateful” for the outpour of support from the hockey world and fans following his decision to enter the program.

“I’ve had quite the journey at the start of the season,” he said. “It would have been a lot more difficult if I hadn’t had such a warm sense of encouragement from everyone.”

That decision to enter the program forced Price to pause injury rehabilitation.

“I was in a position where I definitely needed to reach out and it was a trying time for sure,” he said. “At the end of the day it was one [decision] that needed to be made and ultimately it was one that was successful and I’m very thankful for the help that I got.”

The Canadiens have struggled without their superstar goalie and sit at the bottom of the NHL standings with a 8-28-7 record heading into Sunday night’s game against the Columbus Blue Jackets in Montreal.

While he said that he doesn’t know the odds for his return, his goal remains to be between the pipes in a Habs uniform this season.

“It’s always been my goal ever since I got back here. Obviously I’ve had a couple of setbacks that weren’t foreseen. It’s been a frustrating process, no doubt, but at the end of the day I gotta take care of it and I’m moving forward.

“I’m starting to skate again so hopefully I’ll keep on progressing and I’ll be able to get back in a uniform pretty soon.”