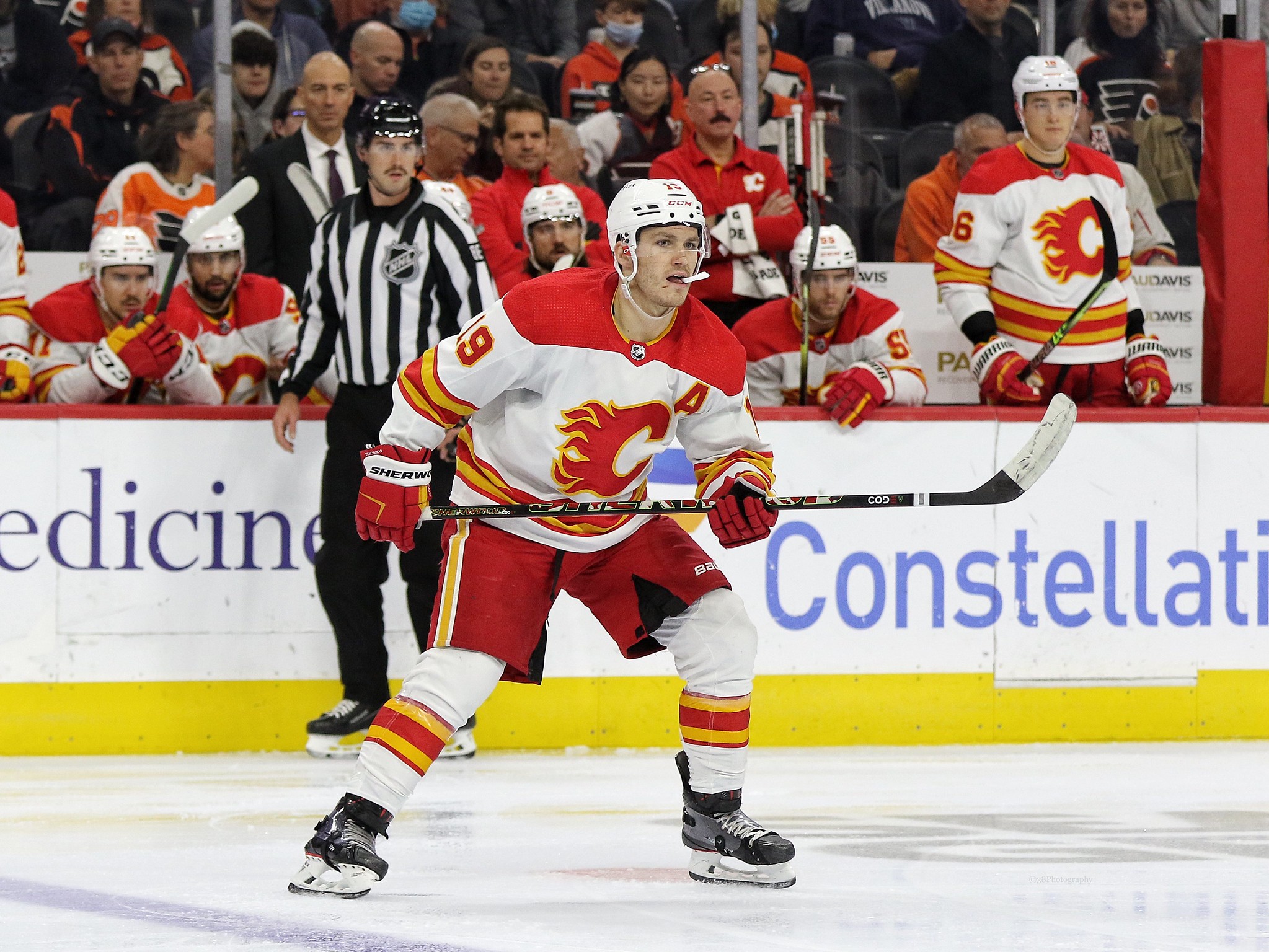 The daily “NHL Soundbites” column is your go-to for the top quotes from every postgame press conference in the NHL. Also, listen to THW contributors talk hockey every weekday on The Hockey Writers Podcast, available on iHeartRadioand wherever you listen to podcasts.

In this edition of NHL Soundbites, these are the top quotes from players and coaches following all games played on Feb. 9, 2022:

The Red Wings took down the Flyers, 6-3, on Wednesday in the first matchup of a home-and-home series between the two teams. After Philadelphia scored late in the second period to climb within one goal of the Red Wings, 4-3, Detroit locked it down in the third period, keeping the Flyers off the scoresheet and tallying a pair of goals from Givani Smith and Vladislav Namestnikov.

The Flyers lose in its first game after the 2022 NHL All-Star Weekend, ending a two-game win streak. Philadelphia struggled to keep up with the red-hot Red Wings on Wednesday.

Flyers forward Scott Laughton: “We were playing some good hockey before the break. Seemed like we were watching too much tonight and they were making plays around us and spending too much time in our [defensive] zone, and then you can’t get out of the zone and have energy to go on offense. Definitely frustrating.”

The Blackhawks put together a strong performance, defeating the Oilers, 4-1, on Wednesday. Chicago’s Alex DeBrincat scored on the team’s first shot of the game at 1:44 of the first period, before his teammate Brandon Hagel potted another goal just 1:03 later, helping Chicago run away with the game early.

Blackhawks forward Alex DeBrincat: “I think we came ready to play; we played simple right off the bat, got it in deep and went to work. We draw a penalty early and scored on that, got the momentum and went from there. We had a good start, but the second period was a little slow, so we can still improve there.”

The Oilers remain winless after the 2022 NHL All-Star Weekend, first falling to the Vegas Golden Knights, 4-0, on Tuesday, and then to the Blackhawks, 4-1, on Wednesday. While Edmonton had some life, with forward Leon Draisaitl bringing the team back within one goal, 2-1, in the second period, Chicago proved too strong for the Oilers and proceeded to score another two goals in the third period.

Oilers forward Connor McDavid: “That was a very, very bad start. [Oilers goaltender Mike Smith] held us in and to be only down two after one, I think we felt very fortunate. But that being said, I liked our second period. I thought we did a pretty good job getting ourselves back into it and maybe could have tied the game in the second, but that’s not how it went.”

The Stars got the win in its first game following the 2022 NHL All-Star Weekend, a 4-3 victory over the Predators on Wednesday. It was an intense, fast-paced matchup, with Dallas holding four one-goal leads in the game, and Nashville managing to claw back and tie it three times.

Stars head coach Rick Bowness: “We had talked yesterday, and even today, that this was going to be a playoff-type game and it was. It was a great hockey game out there… We got good games from everybody tonight, that was a [heck] of a hockey game.”

The Predators accumulated 14 penalty minutes in the game and allowed two Stars goals on the penalty kill. Nashville struggled to limit Dallas’ scoring opportunities, especially with how much time it spent down a man.

Predators head coach John Hynes: “I thought we played a volatile game. Undisciplined, and we beat ourselves tonight. When you look at that, we spent over 20 percent of the game on the penalty kill. We took six penalties. One 5-on-3, one 4-on-3. We gave up nine odd-man rushes… That’s not a recipe to success and that’s not the way we want to play. It’s not what our identity is.”

The Flames won its fourth consecutive game, shutting out the Golden Knights, 6-0, on Wednesday. Calgary scored three goals in the first period, from the sticks of forwards Johnny Gaudreau, Mikael Backlund, and Elias Lindholm, which set it up to close out the game.

Flames forward Matthew Tkachuk: “Tonight, our first period really set up our game. When you’re up 3-0 after one like that, that’s really hard to come back from. We want to make this place a tough place to play. We want to be known as a great first-period team here because when you dominate like we did in the first period, that doesn’t give the other team a ton of confidence.”

The Golden Knights have had an up-and-down past two games, shutting out the Edmonton Oilers, 4-0, on Tuesday, before getting shut out itself by the Flames, 6-0, on Wednesday. Calgary’s quick start was too much for Vegas to handle, and the Golden Knights never found a way back into the game.

Golden Knights defenseman Brayden McNabb: “We knew they were going to come. They’re a good team. They start fast. They dominated us from start to finish. They embarrassed us. They deserved to win that one like they did.”

The Coyotes are victorious in its first visit to Seattle, heading home with a 5-2 victory over the Kraken on Wednesday. Arizona goaltender Karel Vejmelka stole the show, stopping 34 of 36 shots for an impressive .944 save percentage (SV%).

Coyotes head coach André Tourigny: “Seattle has speed to get really good scoring chances but our goalie came up big. [Vejmelka] made the difference. He made key saves at key moments and that’s what you need sometimes. When you have a breakdown and your goalie makes a big save, after the game you remember it. Tonight he made those key saves and gave us a chance to bounce back right away.”

The Kraken looked out of form on Wednesday, which ultimately led to a loss against the Coyotes, who rank 31st in the NHL standings. The defeat comes after Seattle posted its first shutout in franchise history, a 3-0 win at the New York Islanders on Feb. 2, prior to the 2022 NHL All-Star Weekend.

Kraken head coach Dave Hakstol: “We weren’t sharp, we weren’t clean with the puck. In reality, each of their three goals came off our sticks… The rust showed, we’re not making an excuse, but we weren’t sharp when we didn’t have the puck. That area of our game was not at the level it needed to be. Without the puck we weren’t connecting as much as we are when it’s going well.”

The Islanders improve to a .500 points percentage (P%) on the season with a 6-3 win over the Canucks on Wednesday. After New York scored five consecutive goals in the first period, Vancouver followed up with three consecutive tallies of its own (one in the first period, two in the second period), before Islanders forward Matt Martin iced the game, making it 6-3 at 14:19 of the third period.

Islanders forward Zach Parise: “They had a good second period and we got a hemmed in our zone a little bit, but we were able to lock it down when we needed to, and then we got a huge goal at the end to make it 6-3 and let everyone take a deep breath. But I thought just top to bottom it was a really good effort by us.”

The Canucks’ early five-goal deficit proved too much to overcome, especially with Vancouver playing on back-to-back nights after defeating the Coyotes, 5-1, on Tuesday. The Islanders were just too much for the Canucks to handle on Wednesday.

Canucks defenseman Luke Schenn: “They came out hard, they were flying, they were at another gear. We were on our heels, they were on their toes and all over us, and obviously they capitalized on their opportunities. Before you know it, it was bang-bang-bang and in the net and we’re chasing the game from there.”

Tom Pepper writes the “NHL Soundbites” and “NHL Talk” columns, every day, and hosts The Hockey Writers Podcast on iHeartRadio and wherever you listen to podcasts, every weekday (Monday to Friday). He is a diehard Buffalo Sabres fan in Toronto, frequently driving the Queen Elizabeth Way to cheer on his team at KeyBank Center. You can favourite and/or bookmark this page to stay up-to-date with Tom Pepper’s daily hockey content.

Wolves one win away after Game 4 triumph
“That is wacky!” | Weird NHL Vol. 36
Penguins’ Malkin and Letang Are Too Valuable To Give Up
Lightning force a Game 6: What we learned as the series heads back to Tampa
Fight Night at the Joe: Remembering the legendary Colorado Avalanche-Detroit Red Wings brawl of 1997