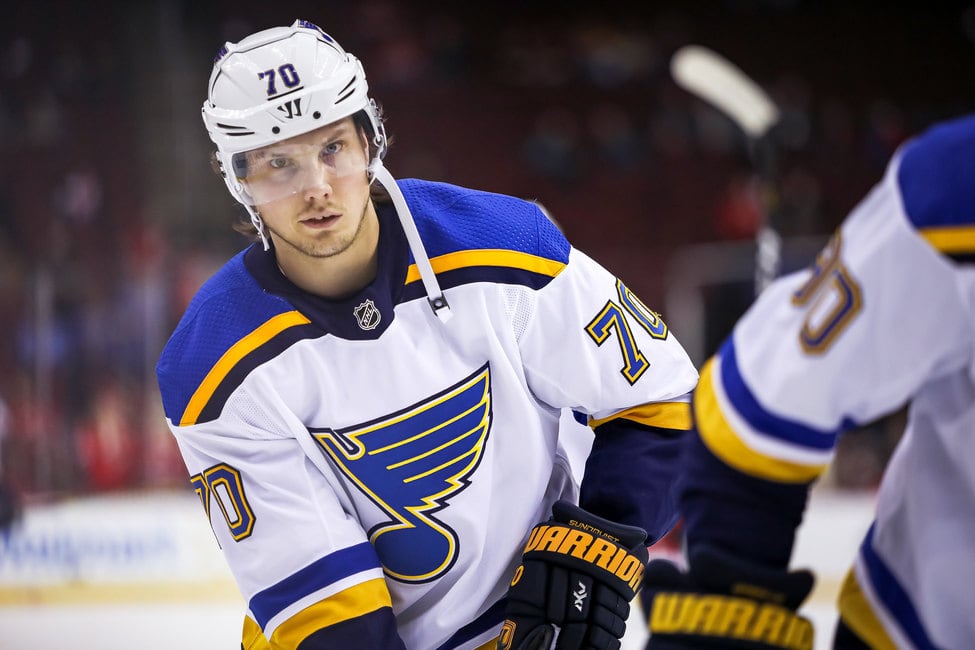 The daily “NHL Talk” column is your go-to for the top quotes from every game in the NHL. Listen to THW contributors talk hockey every weekday on The Hockey Writers Podcast, available on iHeartRadio and wherever you listen to podcasts.

In this edition of NHL Talk, these are the top quotes from players and coaches following all games played on Feb. 12, 2022:

The Red Wings completed a home-and-home sweep, taking down the Philadelphia Flyers, 4-2, in Detroit on Saturday. Forward Dylan Larkin tallied three assists and goaltender Thomas Greiss saved 32 of 34 shots for a .941 save percentage (SV%).

Red Wings head coach Jeff Blashill: “I didn’t think we were as crisp as we were in Philadelphia, but [Greiss] played very, very well. He was really strong coming back off that layoff. He controlled the game and the puck stuck to him.”

The Flyers have now lost 15 of its last 17 games and continue to free fall in the NHL standings, ranked last place in the Metropolitan Division and 27th in the league. Philadelphia outshot Detroit, 34-23, on Saturday, but couldn’t manage to pull out a win.

Flyers forward Scott Laughton: “Obviously, this isn’t the result we wanted, but we skated a lot better and we were working together. We’ve got to keep building on that and hopefully get something going.”

The Bruins ended a two-game losing skid by shutting out the Senators, 2-0, on Saturday. Boston goaltender Jeremy Swayman put on a show, turning aside all 30 shots he faced in the game.

Bruins goaltender Jeremy Swayman: “I think there were ups and downs [my last few games]. I wouldn’t necessarily say that, you know, it was off. Obviously, there’s goals I want back, and that’s the game of hockey. I’m in a great position to learn every day and play with some of the best players in the world. So that’s what I’m doing, focusing on the positives and moving forward.”

The Senators allowed two goals in the first period, which ended up being the only goals scored in the game. Ottawa was unable to overcome the early two-goal deficit.

Senators forward Nick Paul: “[The slow start] isn’t the identity we want. We want to be the hardest-working team every night. That first period wasn’t it. We started coming in the second and the third, but it was already too late. Things happen and learning experiences happen. As a team, we know we’ve got to be ready off the start, or games like these happen.

The Blue Jackets scored with eight seconds remaining in the third period to defeat the Canadiens, 2-1, on Saturday. Columbus forward Patrik Laine was the hero of the game, firing home the game-winning goal on the power play in the dying seconds, which brings the Blue Jackets to ten points out of a wild card spot.

Blue Jackets forward Patrik Laine: “We’re not in the playoffs right now but we’re working hard and it’s obviously nice to get wins. And you need to get wins at this time of year if you want to make it and we’ve got to capitalize when other teams are losing and try to get back into the race that way. I think everybody has pride to play this game and play on this team.”

The Canadiens’ heartbreaking defeat extends its winless streak to nine games. Montreal forward Cole Caufield gave his team some life by tying the game up, 1-1, at 2:55 of the third period, but the Blue Jackets wouldn’t allow anything else.

Canadiens forward Tyler Toffoli: “They do a good job of kind of suffocating the game and that’s kind of what was happening to us early in the game. We were fighting, we were battling and eventually we broke through, not only with the goal but we were creating we really good opportunities, and we had a chance to win today.”

The Canucks came away with the victory, 3-2, over the Maple Leafs on Saturday. Vancouver was outshot, 53-24, in the game, but goaltender Thatcher Demko stopped 51 shots for a .962 SV%, ultimately sealing the win.

Canucks head coach Bruce Boudreau: “I don’t care if we got outshot. We ended up winning the game, and that’s the bottom line. It would take a fool to think that. We know the goalie was amazing. He’s our goalie, and we get to have him every night.”

The Maple Leafs trailed, 2-0, at the first intermission, came back to tie the game, 2-2, in the second period, but couldn’t get the job done on Saturday. Toronto struggled against Demko, who is one of the strongest goaltenders in the NHL right now.

Maple Leafs head coach Sheldon Keefe: “We just lacked the intensity required to start the game. Obviously, we deserved a whole lot more goals than we got tonight, but that’s what happens right? It’s a team that relies on world-class goaltending to win games, and you give them a two-goal lead and it’s an uphill climb.”

The Jets soared to a convincing win over the Predators, 5-2, on Saturday. Winnipeg found itself down, 2-0, in the first period, but proceeded to score five consecutive goals throughout the rest of the game, primarily led by forward Blake Wheeler’s two goals and three assists.

The Predators shot itself in the foot with a whopping 45 penalty minutes in the game. After the Jets scored an even-strength goal at the end of the first period, Nashville proceeded to allow three power play goals on the next three Winnipeg tallies.

Predators defenseman Mattias Ekholm: “I think penalties has been a part of our team the whole year. We’ve still been able to win games. But now it’s starting to bite us… I know guys don’t want to take penalties. It’s not like someone is trying to go out there and take a penalty. That’s just been the case as of late and that’s something that needs to (change).”

The Wild extended its home point streak to 12 games with a 3-2 victory over the Hurricanes on Saturday. Minnesota forwards Kevin Fiala and Frederick Gaudreau each had a goal and an assist, while goaltender Cam Talbot turned aside 37 of 39 shots for a .949 SV%.

Wild head coach Dean Evason: “Everything was quick, quick, quick. It was a fun game to be part of. Got a little intense or felt like it was kind of slipping away on us at the end, but we caught it and certainly, our goaltender caught it before all of us did, not only at the end but the start as well. [Talbot] was great, kept us in a spot where we could get the job done at the end.”

The Hurricanes have a 1-1-2 record to start the month of February. Carolina’s loss on Saturday is another frustrating one for the team, who outshot the Wild, 39-27, in the game.

Hurricanes head coach Rod Brind’Amour: “The easy thing to do is say we lost three of four and that’s bad, but that’s not how I’m looking at it… Obviously, the outcomes are not acceptable but there’s a lot of good that went on. At the end of the day, you gotta win the games, got to find a way. When you play a pretty good game and create enough to win, those are tough.”

Blues forward Oskar Sundqvist: “I think we did a really good job, especially the F1 and F2 [forwards] coming in and getting a stop to the play, getting in quick and getting the puck back. The forecheck was really good today and it’s a key for our game to be successful. Our forecheck game is very important. When it works, then we’re really dangerous.”

The Blackhawks never found a way back into the game after the Blues opened the scoring at 8:19 of the first period. Chicago failed to find sustained momentum and its only goal came from forward Dylan Strome at 2:37 of the second period.

Blackhawks head coach Derek King: “That’s a good hockey team, we know that. We knew it was going to be a challenge, but that’s not good enough. I’ve got to watch my words here, but we just can’t do that. You can’t put an effort like that out and maybe steal a game from somebody. That’s not going to happen.”

The Flames continued the longest active win streak in the NHL with a sixth consecutive victory, taking down the Islanders, 5-2, on Saturday. Calgary got an early lead in the first period, before coughing it up and allowing New York to tie the game, but eventually ran away with the contest.

The Islanders lost back-to-back games, falling to the Edmonton Oilers, 3-1, on Friday and Flames, 5-2, on Saturday. While New York made an effort to keep up with Calgary, it couldn’t quite keep up in the end.

Islanders defenseman Noah Dobson: “I think every loss is frustrating in its own way. I think we go in there each night trying to win. The last two games we definitely did some good stuff, and I think tonight just a couple breakdowns that cost us. I think we can’t dwell on it.”

Tom Pepper hosts The Hockey Writers Podcast on iHeartRadio and wherever you listen to podcasts, every weekday (Monday to Friday), and writes the daily “NHL Talk” column. He is a diehard Buffalo Sabres fan in Toronto, frequently driving the Queen Elizabeth Way to cheer on his team at KeyBank Center. You can favourite and/or bookmark this page to stay up-to-date with Tom Pepper’s daily hockey content.