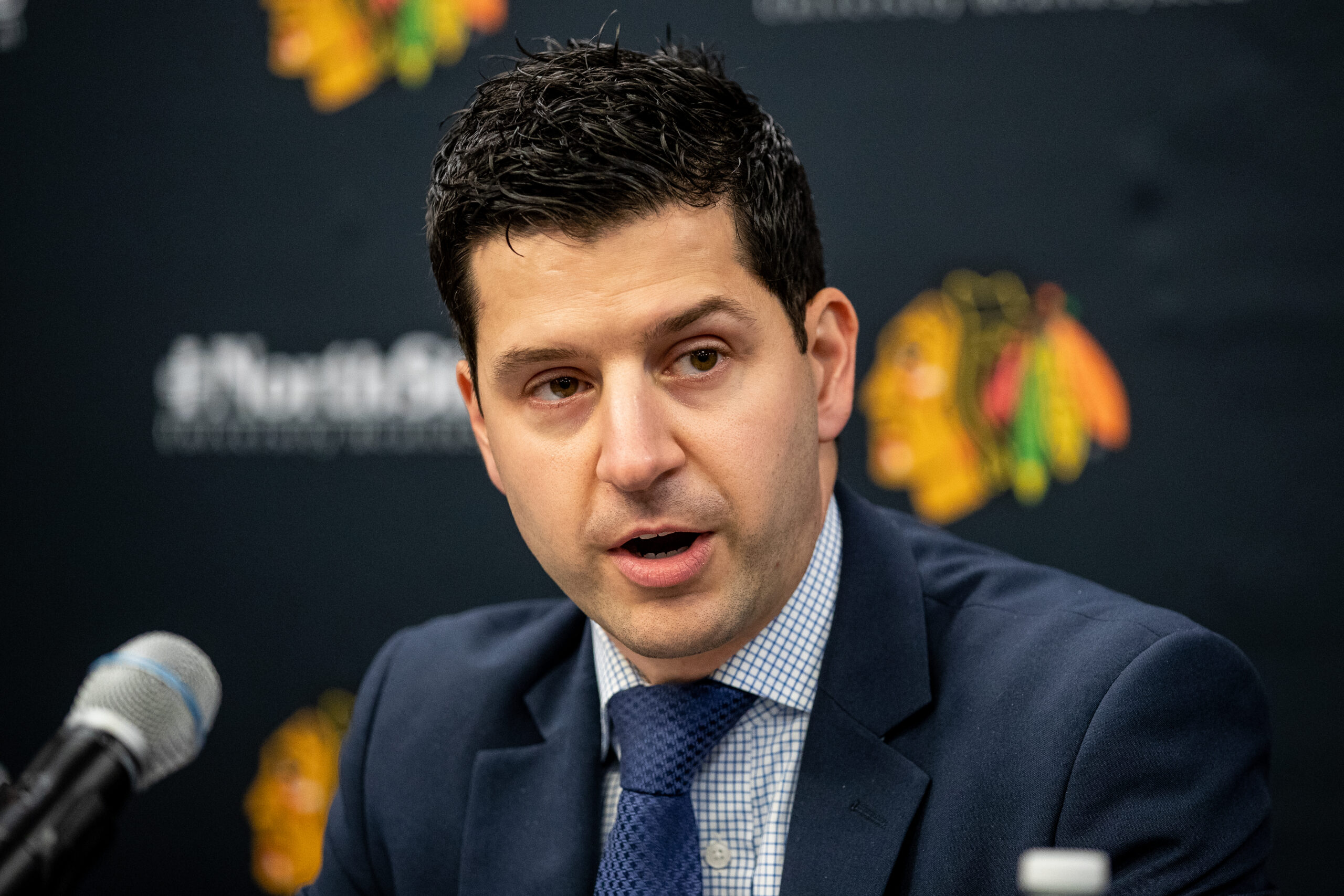 In this edition of NHL Talk, these are the top storylines with quotes from players, coaches, managers, and more.

Listen to The Hockey Writers Podcast on iHeartRadio and wherever you listen to podcasts, every weekday (Monday to Friday), for THW contributors discussing the hottest topics around the NHL and hockey world.

The Chicago Blackhawks hired Kyle Davidson as the team’s new general manager on Tuesday. He has been a member of the Blackhawks organization since 2010, initially joining as a hockey operations intern in the summer of 2010, before working various roles over the following 12 years, including assistant to the general manager beginning in 2018, and last offseason being promoted to assistant general manager of hockey administration. Former Blackhawks forwards Marian Hossa, Patrick Sharp, and Eddie Olczyk assisted in the general manager search, ultimately choosing Davidson for the job.

“Today is another step not just for me, but for my Blackhawks teammates within the organization and Blackhawks fans across the world,” Davidson said. “I’m committed to building a winning team on and off the ice the right way — improving our internal framework and processes and working closely with a strong team of people to make decisions. I share the vision of the leadership team to create a positive culture throughout the organization and the game of hockey and promise to uphold our values in everything we do.”

Montreal Canadiens defenseman Joel Edmundson was cleared for contact and participated in a full practice for the first time this season on Monday. The 28-year-old has been out of the Canadiens’ lineup since suffering a back injury in Game 5 of the Stanley Cup Final on July 7, 2021. It is not yet clear when he could make his season debut, but he is taking steps in the right direction and is expected to return to game action in the near future.

“He’s an amazing guy, on and off the ice,” Canadiens forward Josh Anderson said. “He’s a true leader for all the guys in that locker room. With this year being tough, with the injury that he’s had, he still feels a part of our team. He’s in there every single day working hard, doing the things that he needs to do, and I know a lot of guys in that locker room look up to him.”

Jets’ Copp Prepares to Return From Concussion on Tuesday

Winnipeg Jets forward Andrew Copp is expected to return to the lineup against the Montreal Canadiens on Tuesday. The 27-year-old has missed the last six games after sustaining a concussion from a hit by Minnesota Wild forward Jordan Greenway on Feb. 16. Copp ranks fifth among Jets point-getters this season, scoring 28 points (12 goals, 16 assists) in 47 games.

Senators Shut Down Practice Due to Flu Outbreak

The Ottawa Senators cancelled its practice on Monday due to a flu outbreak on the team. As a result, the Senators will be without a handful of its players when it visits the Tampa Bay Lightning on Tuesday. After posting a 5-6-1 record in February, Ottawa looks to overcome adversity in March and hopes to get all of its regulars back in the lineup as soon as possible.

“We got eight or nine guys down with it, four or five played the other night and felt worse throughout the night, and a bunch yesterday,” Senators head coach D.J. Smith said. “The guys that are healthy will do something active today and then we’ll do a morning skate tomorrow and go.”

New Jersey Devils forward Jack Hughes improved his undefeated NHL record over his brother, defenseman Quinn Hughes of the Vancouver Canucks, to 3-0-0 with a 7-2 win on Monday. Jack scored a goal and an assist in the game, which improves his total against Quinn and the Canucks to three points (two goals, one assist) in three games. The brothers will play one more game against each other this season, when Jack and the Devils visit Vancouver on March 15.

“[Jack]’s the type of player who’s basically ready to go on the ice every second shift,” Devils head coach Lindy Ruff said. “And that’s one heck of an attribute for a player. … He’s got himself in a nice little run. He’s really skating well. He just continues to grow. There’s plays inside the game that really only he can make because he’s so explosive.”

The Washington Capitals dropped its third game in a row, and sixth consecutive game at home, with a 5-3 loss to the Toronto Maple Leafs on Monday. The Capitals sit in the final wild card spot in the Eastern Conference, with a 28-18-9 record. Although Washington holds its playoff position by a 10-point margin, the Columbus Blue Jackets, who are 7-3-0 in its last 10 games, may threaten for its spot in the postseason if the Capitals can’t turn things around soon.

“There’s frustration. I think you’re probably angry more than anything else,” Capitals head coach Peter Laviolette said. “It’s our building and we’re not getting it done. Something’s got to be better.”

Boston Bruins forward Jake DeBrusk recorded the first hat trick of his NHL career in impressive fashion, scoring three consecutive goals for a natural hat trick to open the scoring of a 7-0 win at the Los Angeles Kings on Monday. The 25-year-old is discovering his scoring touch, with seven goals in his last five games. He improves to 24 points (14 goals, 10 assists) in 48 games this season.

“I think it means that I have the attributes to do it, if that makes any sense? But this is the best league in the world, and it’s hard to do that every night,” DeBrusk said. “Even top guys on each team have off nights or off swings, or things like that. But I sure like it when things are going like this.”

Tom Pepper hosts The Hockey Writers Podcast on iHeartRadio and wherever you listen to podcasts, every weekday (Monday to Friday), and writes the daily “NHL Talk” column. He is a diehard Seattle Kraken fan, rooting for the team since its pre-expansion draft era. Follow The Hockey Writers Podcast on your favourite audio streaming app and bookmark this page to stay up-to-date with Tom Pepper’s hockey content.