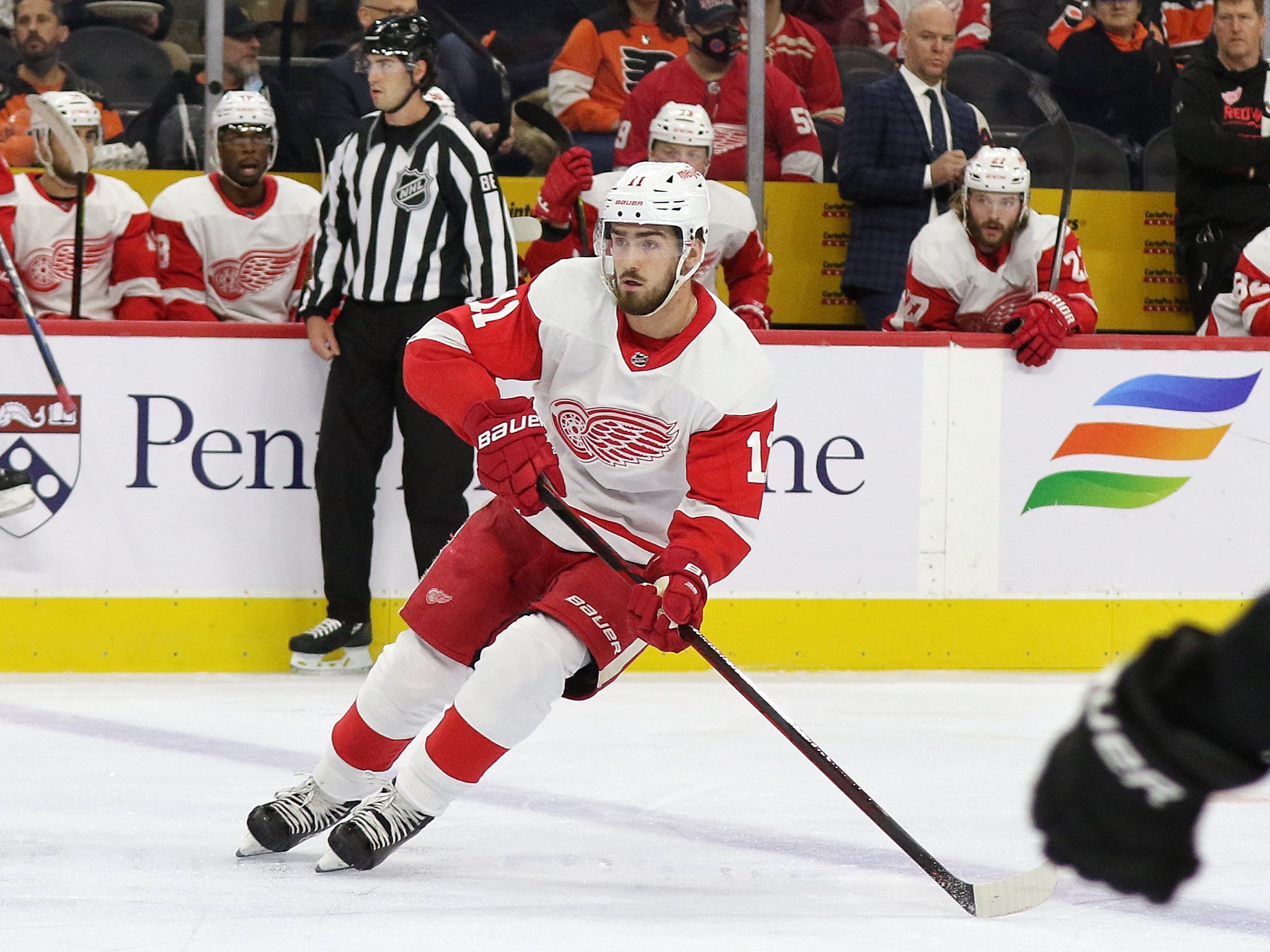 After the Detroit Red Wings were obliterated by the Pittsburgh Penguins 11-2 over the weekend, Dylan Larkin spoke to reporters about players’ motivations and what needs to happen before the season wraps up.

“We have to find a way to start forming an identity here down toward the end of the season and play for something,” noted Larkin.

That something can be an individual goal or simply playing for their teammates. Both are acceptable – each player has their own drivers and motivations.

Four players in particular have something to prove during the final 15 games of the season. Let’s dive into what’s motivating these players to finish the year strong.

Seeing Filip Zadina listed here shouldn’t be too shocking. The former sixth-overall pick from the 2018 NHL Draft has bounced around the lineup this season, producing 20 points in 64 games.

His latest assignment has been to flank Michael Rasmussen (along with Taro Hirose) on Detroit’s fourth line. This can be seen as a demotion, but also a challenge: force Zadina to be the driver for his line.

While it would help to play more than 8-9 minutes a night, Zadina needs to prove that he can in fact be a driver and belongs in the top six – whether that’s in Jeff Blashill’s eyes or those of Detroit’s next coach. He can’t afford to take any shifts off; it’s a contract year for Zadina after all.

Similar to Zadina, Joe Veleno has 15 more games to prove he belongs in the top six, though he’s currently in a better spot than his teammate. Recently, Veleno has been deployed alongside Jakub Vrana and Sam Gagner, serving as the playmaker on their line. It’s due recognition for Veleno, who has spent most of his time gutting it out on the fourth line or skating in Grand Rapids.

However, it’s unclear where Veleno will slot into Detroit’s 2022-23 lineup. The Red Wings could add a middle-six forward in free agency or through a trade. They could also luck into drafting top prospect Shane Wright first overall.

Finishing the 2021-22 season strong will go a long way in solidifying Veleno’s role for next season. He could either slot in on Dylan Larkin’s line (provided Pius Suter, Tyler Bertuzzi, and a healthy Robby Fabbri stay together) or return to a bottom-six grinding role. Surely, Veleno would prefer the responsibility of playing on the first line. But he needs to prove he belongs there first.

For what it’s worth, it’s difficult for players to adapt to a new defensive scheme midseason, let alone one that hasn’t been performing well in the first place. That said, Olli Juolevi and Jake Walman have been fine since joining the Red Wings, but nothing more than that.

Both have solid possession numbers relative to the rest of the team, though that’s come in a limited sample size playing in a bottom-pair role. The same goes for Juolevi and Walman’s contributions to the penalty kill – great comparatively, but again, much smaller sample size.

The two defensemen are set to become restricted free agents (RFAs) this summer. And while the Red Wings could use some depth on the left side of their blue line, it’s not guaranteed that either will be tendered a new contract. The next 15 games will give Juolevi and Walman the opportunity to prove that they belong in the lineup, both this year and into the future. Plus, above-average performances could result in higher 2022-23 salaries than originally expected.

It has been an up-and-down year for the Red Wings. These final 15 games will show what they’re made of and how close they are to contending.

It’s also an opportunity for players like Zadina, Veleno, Juolevi, and Walman to showcase their value to the organization. Are they building blocks or role players? It’s now on them to make that determination.

Tony Wolak is based in the Washington D.C. area and covers the Detroit Red Wings for THW. As a former junior and college hockey player, Tony has a unique perspective on Red Wings topics.

Longtime partner Scotiabank says it is pausing Hockey Canada sponsorship
Lightning confident they’re set up for continued success
Gretzky, Ovechkin and the Goalies They Scored On (A Lot)
Who wins Game 6 of the Stanley Cup Final? Paths to victory for Avs, Lightning
Point quad tear among Bolts injuries in Final