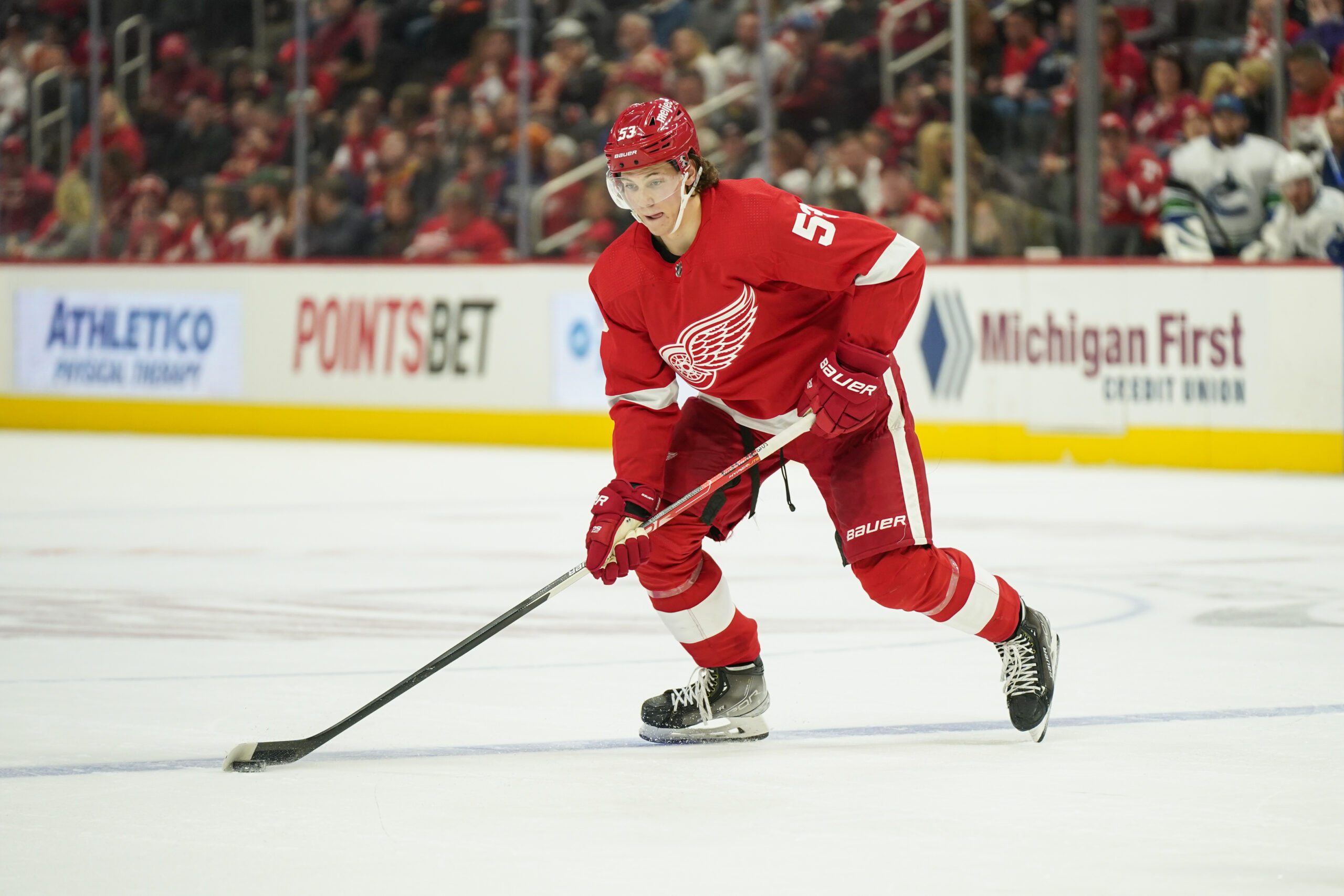 Moritz Seider has the opportunity to accomplish something that no Detroit Red Wings player has done since the Original Six era: Win the Calder Trophy.

But this year, Seider could snap Detroit’s Calder Trophy drought. In fact, Seider is the clear choice to bring home the NHL’s top rookie honors.

The Calder Case for Seider

Each year, the Professional Hockey Writers’ Association votes on and awards the Calder Trophy to “the player selected as the most proficient in his first year of competition in the National Hockey League.” It’s fair to say Seider has been that player.

Whether defending in his own zone, transitioning the puck up ice, or attacking in the offensive zone, Seider has certainly been proficient. He has been playing well beyond his years, earning a role on the top pair and the first power play unit.

In that role, Seider has accumulated 47 points in 75 games. He leads all Red Wings defensemen in scoring and ranks fourth on the team overall. In addition, he’s averaging 23:07 minutes of all-situations ice time per game – most among all Red Wings skaters.

When looking at rookies across the NHL, Seider’s 47 points ranks fourth in the league. He’s also the ice time leader by a solid two minutes.

Comparatively, Seider is playing a larger role than any other rookie. He’s Detroit’s go-to defensemen for all game situations – power play, penalty kill, protecting the lead, attempting to tie the game late, and so on. Seider’s combination of physicality and finesse is reminiscent of a young Brent Burns, though he also possesses the defensive acumen that Burns did not. Overall, he’s been an elite player on a subpar team this season.

Bunting currently leads all rookies in scoring with 63 points. He has played most of the year on Toronto’s top line alongside Auston Matthews and Mitch Marner – which also somewhat serves as a detractor in his Calder case. How proficient would Bunting be if he had replacement-level teammates instead of two of the NHL’s best forwards?

The same could be said for Raymond, who has skated primarily with Dylan Larkin and Tyler Bertuzzi—a step down from Matthews and Marner—but high-quality linemates nonetheless. Raymond’s production (55 points) has been impressive, especially when you consider it’s his first year in North America.

Finally, Zegras has scored some outstanding goals and is a near-constant threat in the offensive zone. In addition, his 57 rank second among all rookies. But the (ever so slight) knock on Zegras is that his play away from the puck could be better.

However, none of these players have the same all-zones impact as Seider. Additionally, Seider has played the majority of the 2021-22 season with a replacement-level (or below) defensive partner. Even with an anchor tied to him, he’s been Detroit’s best defenseman and more than reliable in all situations.

Bunting, Zegras, and Raymond all deserve Calder votes, but Seider is the clear front-runner. Detroit’s rookie defenseman has made a strong case this season and is fully deserving of the award.

The Red Wings should have their first Calder Trophy winner since 1965, kicking off Seider’s collection of NHL hardware, which will surely grow in time.

Tony Wolak is based in the Washington D.C. area and covers the Detroit Red Wings for THW. As a former junior and college hockey player, Tony has a unique perspective on Red Wings topics.

Golden Knights News & Rumors: Smith, DeBoer, Weber & More
Can the Avs clinch on home ice? Previewing what could be a deciding Game 5
Canucks’ Goaltending Is the One Area That Doesn’t Need to Be Addressed
Stanley Cup run shows Lightning have the magic touch at NHL trade deadline
Ottawa Senators ink downtown arena deal once again