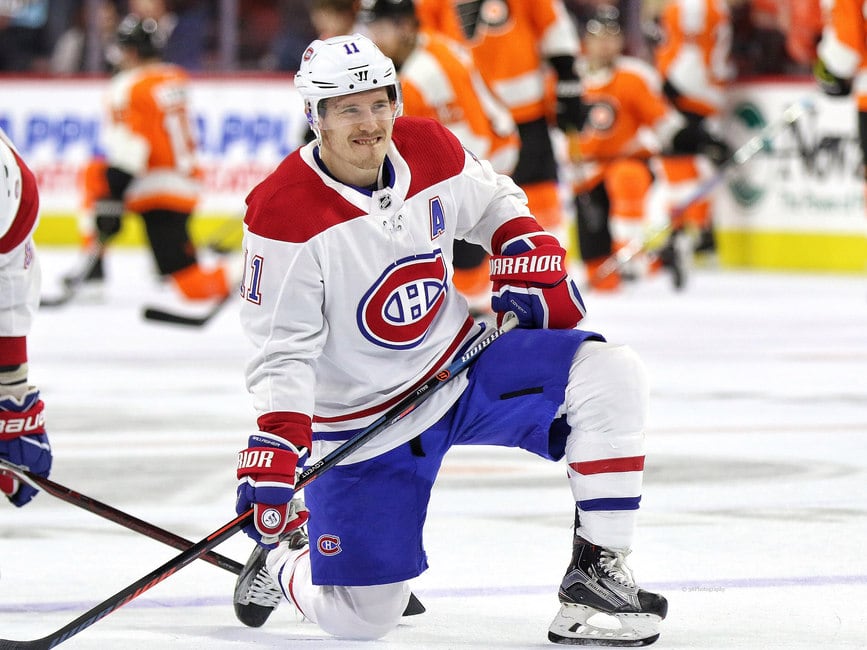 In today’s NHL rumors rundown, could Brendan Gallagher be playing his final games for the Montreal Canadiens? Meanwhile, are the Anaheim Ducks open to moving goaltender John Gibson?

When it comes to NHL coaching news, which teams are looking to bring back their bench bosses who have expiring contracts and which teams will look in other directions?

Gallagher Done With Canadiens After This Season?

As per Stu Cowan of the Montreal Gazette: “The Canadiens have only five games remaining this season and you have to wonder if they might be Brendan Gallagher’s last ones with the team.” Cowan talked about the many changes expected this offseason for the Canadiens and suggested that GM Kent Hughes would probably like to unload the final five seasons of Gallagher’s six-year, $39-million contract.

Cowan also believes that Gallagher wouldn’t be opposed to a change of scenery and a look for an opportunity to win. He adds:

This has been a difficult season for Gallagher, who has battled injuries and has only six goals in 51 games. His contract might scare away other teams but, if the Canadiens were willing to eat some of it, maybe a deal can be made.

Cowan suggests that perhaps the Los Angeles Kings would be interested. They had success when signing Philip Danault as a free agent and Marc Bergevin is now a senior adviser to Kings GM Rob Blake.

Ducks Will Listen to Offers for Gibson

While the Anaheim Ducks aren’t rumored to be shopping goaltender John Gibson, Eric Stephens of The Athletic writes that it is likely the team will listen to offers for the veteran netminder. Saying it isn’t easy to find legitimate No. 1 goalies in the NHL, any offer would need to blow the Ducks away.

The Ducks would also need to learn that Gibson isn’t keen on sticking out a rebuild with the club. Stephens writes:

And if the conversation hasn’t already been had, I’d imagine that Verbeek will gauge just how much Gibson wants to ride out this rebuild. If he gets a sense that the 28-year-old prefers to be with a team that’s closer to Stanley Cup contention, then you can bet there will be more trade speculation that’s real and not conjured up for our enjoyment.

In one scenario (just an idea he was spitballing), Stephens suggested there might be a fit between the Pittsburgh Penguins and Ducks involving Tristan Jarry.

With so many possible changes coming to the Chicago Blackhawks this offseason, it’s no suprise that the coaching situation in Chicago remains fluid. Pierre LeBrun of The Athletic notes that Derek King’s position as coach is not secure.

GM Kyle Davidson told me this week that the Hawks would address the coaching situation in the offseason. My sense is the players have enjoyed playing for King. But with the front office still charting a new course overall, it’s no slam dunk he returns. One source suggested to me it’s 50-50.

If he does stay, it could be on a short-term extension. There are a lot of questions surrounding the team and Jonathan Toews has been vocal about the lack of motivation by some of the players. That can’t reflect well on the coaching.

LeBrun also writes that Woodcroft guiding the Oilers to a terrific second half has not gone unnoticed by teams. That said, Oilers GM Ken Holland is going to wait until after the season to address the coaching situation. LeBrun notes that fans shouldn’t be concerned about losing Woodcroft as he’s not going to break the bank.

Mark Spector was on Oilers Now with Bob Staufer this week and said he knows that Holland doesn’t do business like this during a playoff stretch run or the postseaon. He expects that a three-year deal will come after the season and notes that no other team is going to outbid the Oilers for the services of their current interim coach. Manson and Woodcroft are likely a package deal.