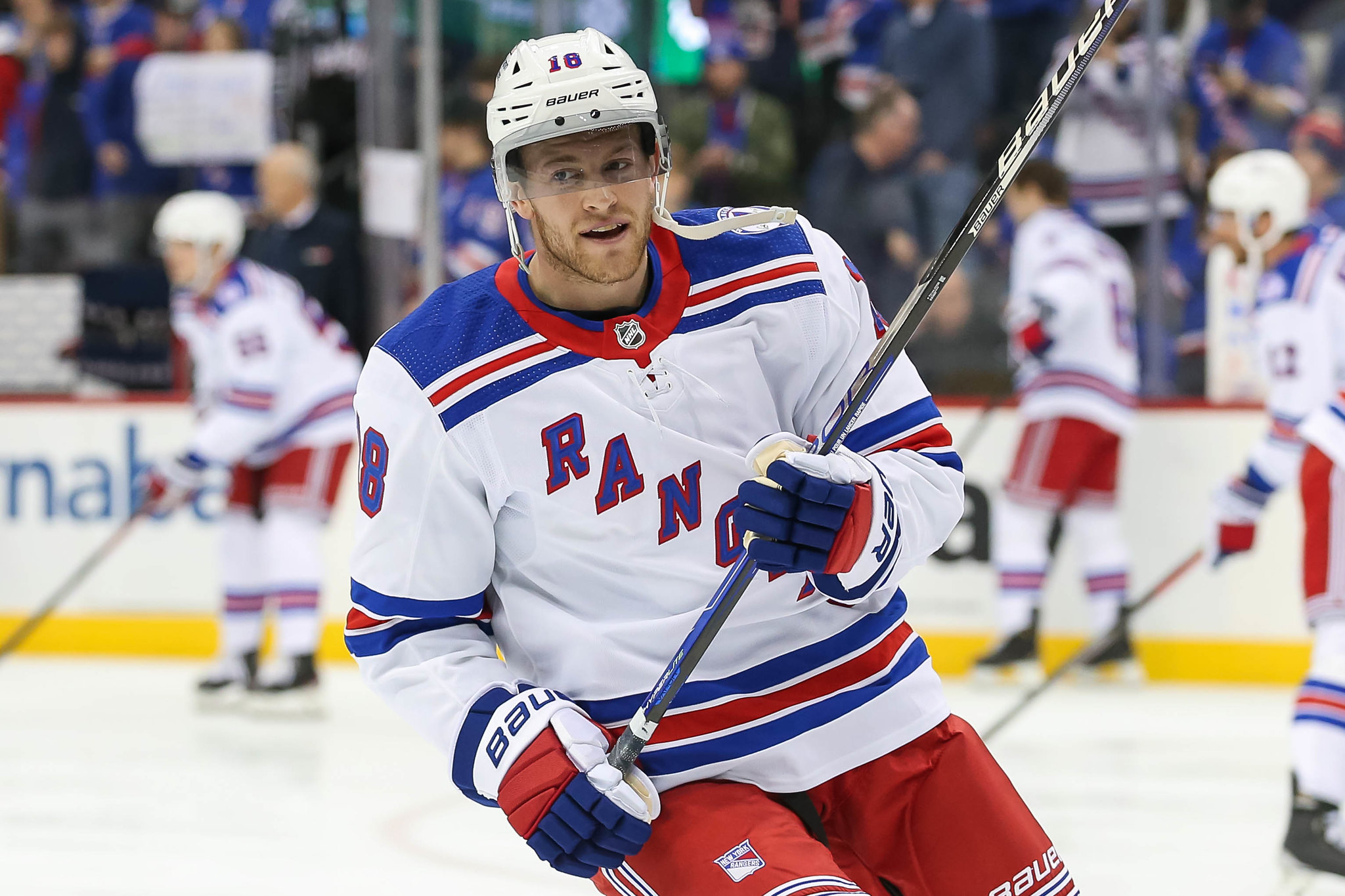 The New York Ranges are headed back to the Stanley Cup Playoffs this 2021-22 season. After a five-year postseason drought that began when the team missed a 2017-18 invite, the team will enter the Cup race with much to prove. The franchise made a series of rapid improvements and the time has finally come to see how long it will pay off.

While the series configurations are still being determined, the Rangers currently reside in the second-place Metropolitan slot still. Compared to their fifth-place landing spot last season, the team visibly made giant strides this season and the numbers back it up as well. Further, the team is not only cementing new historical records, but several teammates are establishing career feats.

Of course, contributions up and down the lineup would be favorable — in fact, necessary — to go far. While the offense will need to keep on pace, especially the team’s producing leaders, the Rangers cannot depend on the same core of skaters to score. Yet, because much of the regular-season scoring has been captained by members of the top six, it is a trend likely to continue in the postseason. That being said, here are three Rangers forwards with specific incentives to prolong their individual production when the Cup chase begins next week.

One of the several pickups from the trade deadline, Copp made an instantaneous and impressive impact with his new team. The 27-year-old, versatile forward racked up 18 points (eight goals, 10 assists) in 16 games as a Ranger thus far. In his last full game, he scored a natural hat trick in the first period against the New York Islanders on April 21. From that game on, Copp had dealt with injuries that still afflict his place in the lineup, though being primarily precautionary at this point.

Allowing time for Copp to rest would put him in the best position to come out ready in the first round. A lot of eyes will be on him after the way he stepped in for the Rangers, and the expectations will be high. He is no stranger to playoff performances, conveniently enough. In 34 playoff games, including the 2019-20 qualifying round with his former team, the Winnipeg Jets, the forward registered 12 points (three goals, nine assists).

Copp was a consistent player to watch almost every night and is a profound reason why the front office really hit the jackpot at the trade deadline. He already well-exceeded his career high for points in a singular season, with now 53 points (21 goals, 32 assists) between his last season with the Jets in addition to his time with the Rangers. Prior, his best season saw a height of 39 points (15 goals, 24 assists).

With the organization also aiming to solidify the second-line centerman spot, Copp could be the ideal fit. To do so, he would have to consistently produce in the postseason and outperform his own regular-season self. The argument of extending Ryan Strome, the current second-line center, or delegating the role to Copp, would heat up if his numbers take off in the playoffs.

To make the situation more interesting, either Strome or Copp would be slotted with Artemi Panarin, who is dynamic enough to play with and elevate anyone. Though Panarin is accustomed to paying with Strome, it would be entirely plausible that Copp could be the replacement with little concern adjusting, but his price tag must be taken into consideration as well.

With Strome on a hot streak of his own lately, Copp can engage in some of the healthy competition that coach Gerard Gallant alluded to earlier when talking about teams that have significant depth. He also mentioned that this can help bring out a player’s full game, and if there is one thing to know about Gallant, it’s that he has a skill for getting the most of his players.

Copp already demonstrated the extent of his complete game; he has been a difference maker with the Rangers. With two game-winning goals already for his new team, excitement to see what he can do in the postseason could not be higher.

Kreider is in the midst of a historical season as is, on a personal level and in franchise history, thus a profound playoff performance would top it off for the veteran. The soon-to-be 30-year-old is a career-long Ranger, and while he exceeded his career numbers and made team records this season, the winger is also nearing the end of his career. Though he is not as young as the rest of the team, he finally fine-tuned his skill for deflecting and tipping in goals, which he perfected at the right time.

To fully comprehend the profound season Kreider is having, he has been leading the league in various scoring categories for quite some time. He is still the leader in power-play scoring with 26 goals. His 52 goals on the season makes him the third-best scorer amongst all skaters right now. Needless to say, he has been the best scorer on his team and collected a stunning 11 game-winning goals this season.

His leadership is incredibly important to the team and will play a crucial role in the postseason as he guides his his young teammates. He recently won the Steven McDonald “Extra Effort” Award and more recently, the first-ever Rod Gilbert “Mr. Ranger” Award due to his contributions on and off the ice, particularly this season. Count on Kreider to be a massive part of their performance this postseason; he sure will need to be.

With 80 playoff games under his belt, Kreider looks to increase his playoff production that is currently capped at 39 points (24 goals, 15 points). Among those points, six were game-winning goals and one was an overtime goal. Kreider has no issues stepping up in big situations, but with his heightened success this season, it will be interesting to see how he is able to finish off his illustrious season.

Both Zibanejad and Kreider were critical pieces of the offense all season and that fact alone makes their scoring production necessary. Though the Swedish center is having a bit of a quieter season compared to his lineman, Kreider, all three of these forwards are having a career years.

After he had a rough recovery from COVID-19 in the 2020-21 season, Zibanejad struggled to match his 2019-20 pace, a season in which he tallied 41 goals and 75 total points. At that time, it was his career best. His performance the next season made it clear the physical effects lingered and the shortened season did not help provide the typical opportunities to score. With 81 points (29 goals, 52 assists) this season, Zibanejad already proved he is not only back to his regular self, he has even outplayed himself and is prepared for the postseason.

Zibanejad participated in 31 playoff games, where he collected 19 points (five goals, 14 assists). Eleven of those points came when he visited the postseason with the Rangers back in 2016-17 and their 2019-20 series. Jumping back to current day, Kreider and Zibanejad are clearly seeing the benefits of having Frank Vatrano on their line. Vatrano, another deadline day pickup, helped transform the Rangers’ top line into something lethal.

The 29-year-old also serves a leadership role on his team, and is a wonderful example of what it takes to be an efficient centerman. His defensive plays are one of his underrated qualities and this is something that can make the difference in a playoff series.

Of course, the whole team, even coach Gallant, has something to prove as they enter the race. A high divisional finishing place was not foreseen by many, especially as the Rangers made a real bid for first place in the Metropolitan. Whether people want to chalk it up to the new coach, Kreider’s outstanding season, or netminder Igor Shesterkin’s phenomenal performance, the Rangers know they have what it takes to get far. They just need to tap into that night after night.

Indeed, the experience from playoffs will be invaluable for the younger players as they develop, but it is something Copp, Kreider, and Zibanejad have enough of — they want the Cup this season. Especially with all three forwards in the later stages of their careers, this Cup chase will mean more to them, which comes with added pressure to produce.

After each of them sat out from last night’s game against the Montreal Canadiens, the Rangers played as a completely different team, further proving their value to the team’s performance.

The Rangers will host the Washington Capitals on home ice tomorrow night for their last regular-season game, a matchup that will help determine the playoff series for the Blueshirts. The Rangers’ leader in assists is winger Panarin with 74 assists and a whopping 96 total points. Capitals’ Alex Ovechkin leads his team with 50 goals and 90 points on the season. John Carlson leads his team in assists with 54 helpers thus far.

Rachel is a graduate of the University of Pittsburgh and earned a degree in Communications and English. After she moved to Pittsburgh for school, she fell in love with the vibrant hockey community but she was raised in a household that rooted for a different team — the New York Rangers. She can be followed on Twitter @RachelNHL for coverage as well.