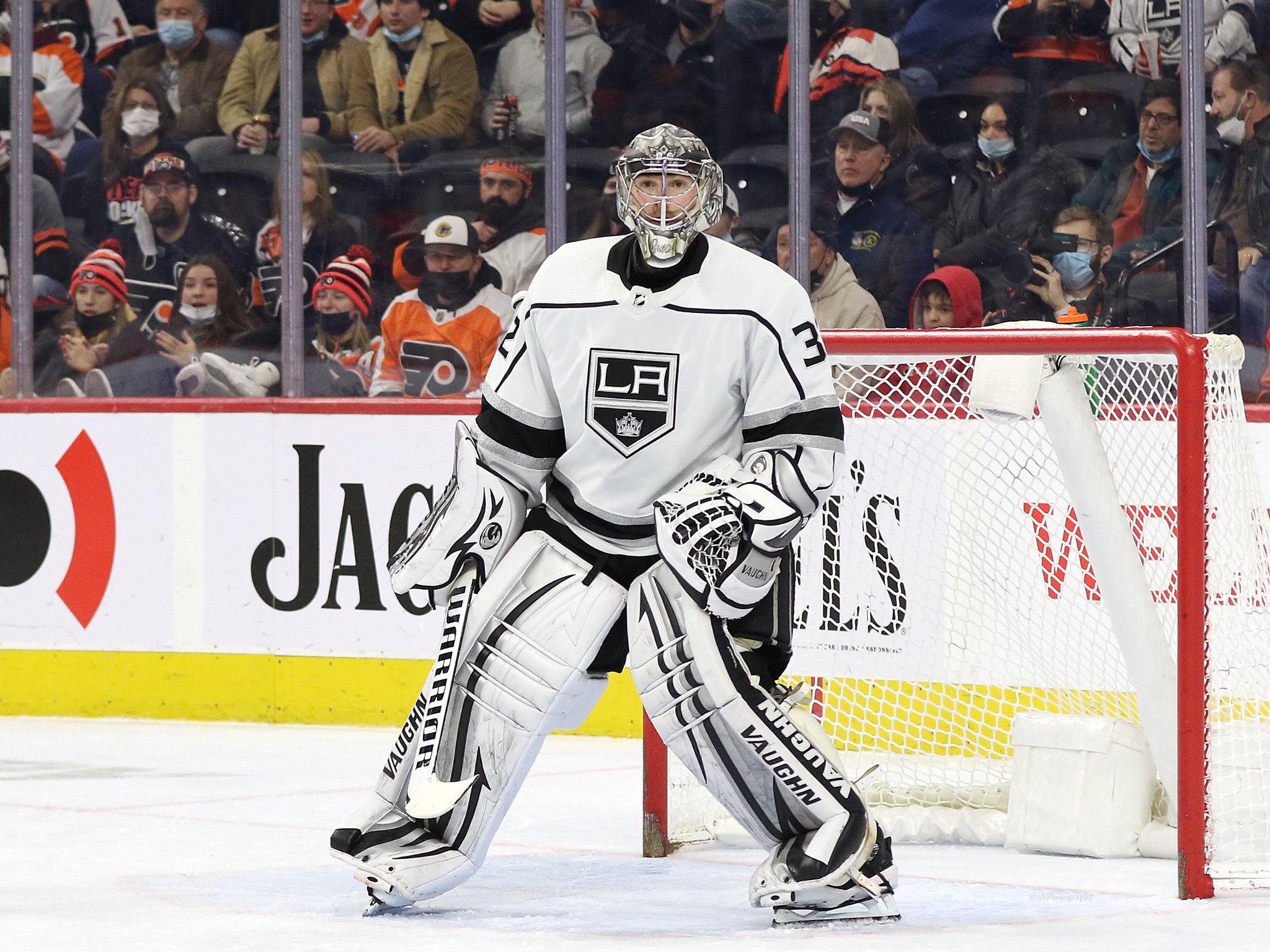 The Los Angeles Kings surprised many by making the playoffs this season and then surprised even more by taking the Edmonton Oilers to seven games. Unfortunately, they could not pull off an upset in round one, but they did have several impressive performers during their first-round series. Here are five players who impressed in the playoffs.

No one was more impressive in this series vs. the Oilers than Jonathan Quick. The veteran goalie stole Game 1, posted a 31-save shutout in Game 4, and kept the team in Game 7 with an incredible 39-save performance. Games 3 & 4, where he allowed a combined 10 goals, hurt his statistics, but anyone who watched could tell you he played great. Despite the losses, he finished the series with 2.1 goals saved above expected and .38 wins above replacement. There were several reasons why the Kings lost this series, but Quick wasn’t one of them.

Watching Quick steal games in the postseason gave fans flashbacks to the Kings’ golden era and hope that they will take another step forward next season. With a better and healthier team in front of him, LA could make a deeper playoff run. For the last few seasons, it seemed as though the Kings were waiting for someone to take the net from Quick, and everyone thought Cal Petersen would do that this season. Instead, Quick had a resurgence that culminated in a fantastic playoff performance. Elite play in the playoffs is expected of him, and he delivered once again.

Quick may have been the Kings’ best player in this series, but no one showed more growth than Mikey Anderson. Anderson put together a quietly impressive season, proving to be a reliable shutdown defenseman against the opposition’s top players. He stepped up in a big way during this series, though. He was good in the early stages but looked great in the last few games.

The phrase “big boy hockey” was thrown around a lot to describe Anderson in this series, and it was fitting. He was engaged physically and made himself a nightmare to play against. He led the team in hits, with 28, but more importantly, he punished players in the corners and in front of the net. He spent a lot of time playing against Connor McDavid and Leon Draisaitl and more than held his own.

If Anderson continues this play into next season, his partnership with Drew Doughty could prove to be one of the best in the NHL. He was already a great compliment to Doughty this season but could become more. He reminded me a bit of Doughty’s old partner Willie Mitchell – a physically imposing defender who excels at shutting down the opposition’s best players. He’s better with the puck on his stick but is similarly limited offensively. Anderson made a statement with his play in this series, and I can’t wait to see how he progresses in 2022-23.

After the season he put together, no one should be surprised that Phil Danault was stellar in the playoffs; he was tied for the team lead in goals with three and tied for second on the team in points with five. It was more than just his offensive play that stood out, though. He spent a lot of this series matched against the Oilers’ two big stars and McDavid.

Danault was particularly effective against Draisaitl, who struggled to produce at 5v5 largely because of Danault’s play. It got to the point that Oilers head coach Jay Woodcroft moved Draisaitl to McDavid’s wing later in the series to jump-start his 5v5 production.

He was especially dominant in Game 1, finishing with two points and the game-winning goal while also controlling possession. He shellshocked the Oilers and put them on notice. After his stellar performance in last year’s playoffs for the Montreal Canadiens, we knew Danault excels in the postseason, even against the best players in the world. He was a key reason the Kings accelerated their rebuild this season and will be a key factor in any future success.

It’s interesting how quickly perceptions can change in hockey. The Kings will have to make some difficult roster decisions this summer. After Andreas Athanasiou finished the season strong, he seemed to have won another contract this summer. However, after Round One, I doubt many will want him re-signed over Carl Grundstrom.

Grundstrom started the series playing on the third line before missing Game 3 due to injury. In Game 4, he was moved onto the second line and made his mark on the series. He finished the game with two goals and an assist in a huge 4-0 win that tied the series at two. His stellar play didn’t end there either; he scored again in Game 6 and added a physical element that was missing on the second line.

His heavy, north-south brand of hockey proved highly effective in the postseason, as he was creating problems for the Oilers’ defence all series. For a Kings team that lacks physicality, especially upfront, he added a much-needed edge to his team. He finished the series third on the team in hits despite playing in just six games. His willingness to drive to the net, both with and without the puck, was huge for the team, as well. Other than Adrian Kempe, LA didn’t have anyone who was willing to attack the net with directness and brute force, but Grundstrom changed that. He made life difficult for the opposition, and that kind of play should keep him on the roster for next season.

Some people might not agree with this since Kempe received his fair share of criticism during this series, but he finished strong. He led the team in points and primary assists and finished second on the team with two goals. He was instrumental in the team’s 5-4 victory in Game 5, and even though he had no points in Game 1, he played a great game.

His ability to carry the puck through the neutral zone proved to be crucial in this series, as he had to do a lot of heavy lifting offensively for the first line. They were deployed primarily as a shutdown line against McDavid, leaving Kempe very few offensive opportunities. In Game 4, head coach Todd McLellan moved Alex Iafallo to the top line to get his two best defensive forwards on the ice against McDavid, leaving Kempe in an unusual spot.

Conceptually, I understood what McLellan wanted to do. He was hoping that Iafallo and Anze Kopitar would shut down the Oilers’ top line, playing a defence-first style while relying on Kempe to create counter-attacking opportunities in transition. It makes sense. His linemates should have been able to create turnovers, and the Oilers’ top line took a lot of risks, but it also left Kempe with a lot of work.

He did well, given the circumstances, and while a lot of people will point to what he didn’t do in this series, what he did do is lead the team in points. After a breakout season and a solid performance in the playoffs, Kempe will earn himself a big pay raise this summer as he looks to solidify himself as a core piece of the team.

Trevor Moore started the series out on fire, dominating Game 1 with three points and finishing the series tied for second on the team with five points. He was great all series, so it might be unfair to name him among the honourable mentions. But I put Kempe on the list above Moore for two reasons: First, Kempe finished with the same number of goals and two more primary assists than Moore; second, Moore had an easier role than Kempe, as his linemates outplayed Kempe’s all series, and he spent less time playing against McDavid. Still, it was a great series to cap off an incredible season from Moore.

Had Troy Stecher played in all seven games, there’s a good chance he would have been named to the list as well but playing in just four games, I found it hard to include him. He was excellent in those four games, though, grabbing three points and re-establishing his partnership with Alex Edler. It’s unlikely he returns next season with the Kings facing a massive logjam at right defence, but I’m sure he’ll have no trouble finding a team after his playoff performance. He was a good, low-cost addition at the deadline for the Kings.

Had Arthur Kaliyev played the entire series as he did in Game 7, he’s another player who would have found his name on the list. He finished with zero points, but that included averaging 5-10 minutes of even-strength ice time through the first six games. That changed in Game 7 when he finished with 14:09 of ice time after being moved onto the top line permanently.

While he didn’t get any points, he also didn’t look out of place alongside Kopitar and Kempe and did fine playing heavy minutes against the top of Edmonton’s lineup. He struggled the few times he found top-six minutes during the regular season but might have figured it out in Game 7. He played with an intensity and pace we haven’t seen from him before, and the possibility that he could step into a permanent top-six role next season is very exciting.

Like Kaliyev, Rasmus Kupari had his most impressive performance in Game 7. Also, like Kaliyev, he finished the series with zero points, playing limited minutes throughout. He only eclipsed 10 minutes of ice time once in this series, as McLellan kept his bench short, but he made the most of his minutes in Game 7.

He was noticeable every time he touched the ice, attacking with his size and speed while playing a responsible 200-foot game. His solid defensive play even earned him some penalty-kill time in the series. I’ve compared his development path to Kempe’s many times, and like Kempe, he needs to play with more confidence offensively, but the tools are there. The Kings are reportedly looking to make some big moves this offseason, so Kupari may be moved, but there is a lot to like about this player, and I hope they stick with him.

Kings Had Plenty of Impressive Performances

It’s hard to be optimistic after losing a playoff series, but there are plenty of reasons for the Kings to be happy. They had several players put together impressive performances and showed a lot of growth in these seven games. The 2021-22 season is over for them, but this is only the beginning for the core of this team, and they showed signs of future success during these playoffs.