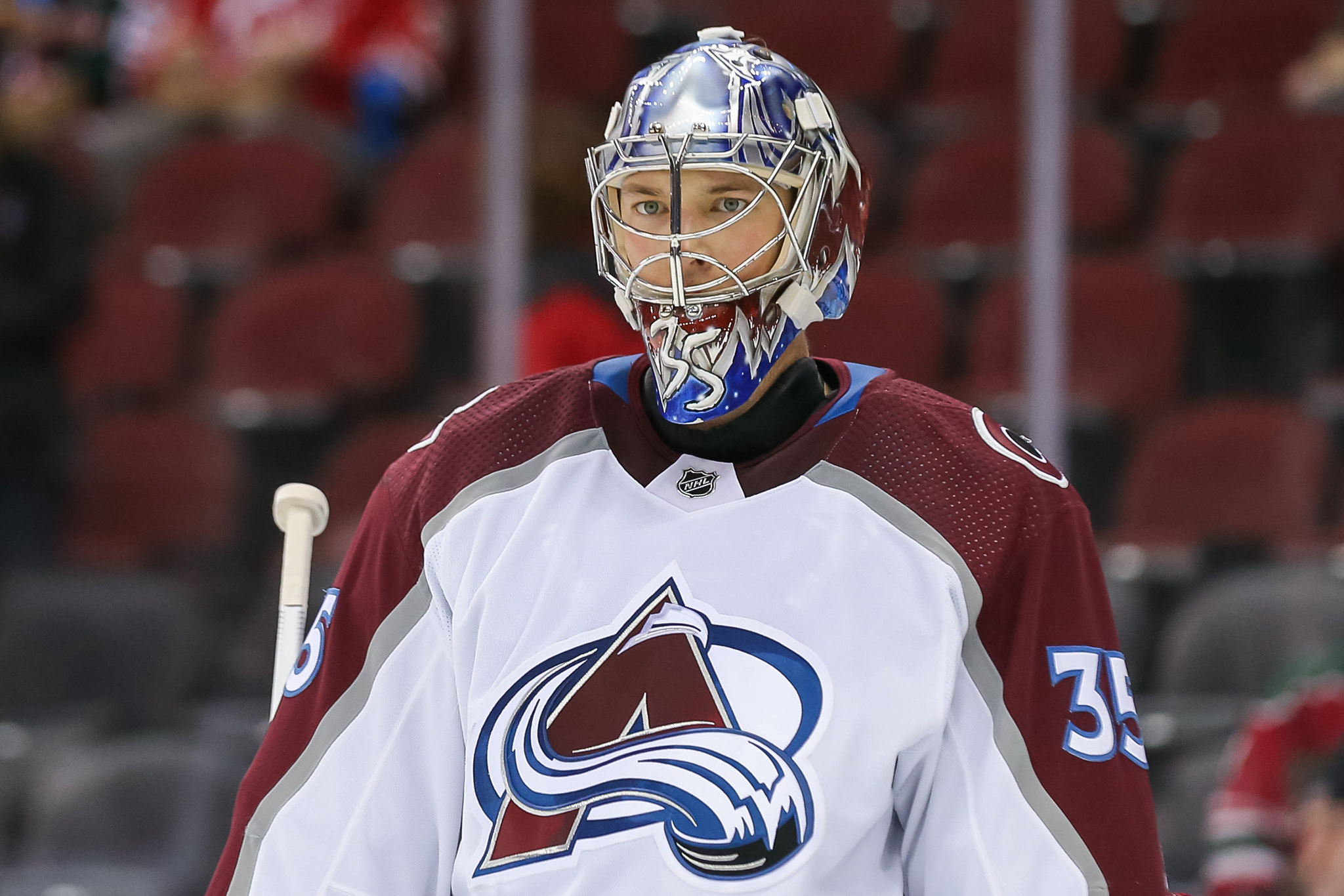 With the conclusion of the Eastern Conference Final, the matchup for the 2022 Stanley Cup Final is set. The Colorado Avalanche are set to take on the Tampa Bay Lightning, who are looking to become the first organization to win three consecutive Stanley Cups since the New York Islanders of the early-1980s. The Lightning represent the Avalanche’s sternest test to date, and it will require a complete buy-in to vanquish the preeminent dynasty of the salary cap era. If the Avalanche are to win their third championship in franchise history and the first since 2001, these three players must step up against the Lightning.

As was the case in my piece ahead of the Western Conference Final, goaltender Darcy Kuemper is the Avalanche player with the most to prove in the Stanley Cup Final. His stellar regular-season performance temporarily relieved doubts about his ability to both withstand the rigours of a full campaign, and to backstop a championship favourite.

The 32-year-old netminder started 57 games for the Western Conference powerhouse, posting a .921 save percentage (SV%) and plus-16.2 goals saved above expected (GSAx), both top-six marks among goalies to have played at least 10 games. After two consecutive postseasons in which implosion in the crease contributed to early playoff exits, his excellence instilled confidence that this year would be different.

Unfortunately, Kuemper has struggled to hit the same peaks he reached during the regular season, with injuries and wobbly play nearly leading to another second-round exit at the hands of the feisty St. Louis Blues. In that series, he sported a .892 SV% and an ugly minus-5.17 GSAx, noticeably struggling at times with otherwise routine saves. If not for an unexpected Darren Helm series-winner with seconds remaining in regulation of Game 6, who knows if the Avalanche are even playing for the Stanley Cup now.

Over the entire 2022 Playoffs, Kuemper has put up a .897 SV% and minus-5.92 GSAx over 10 games, a precipitous fall from his regular-season results. When the goalie staring down at you at the other end is Andrei Vasilevskiy, those numbers just don’t cut it. Backup goaltender Pavel Francouz (.906 SV%; minus-1.72 GSAx) has been slightly better in relief, so Jared Bednar may not hesitate to change goalies if the worrisome trend continues early on in the series. With the Avalanche tilting the ice at 5v5 in these playoffs – third among all teams with an expected goals (xGF%) rate of 57.3% – even average goaltending should be enough to be crowned Stanley Cup champions. Is Kuemper up to the task?

When breakout star Nazem Kadri was ruled out for the foreseeable future (although a Stanley Cup Final return could be in the cards), all eyes turned to who could replace the Avalanche’s second-line center. Although he and Mikko Rantanen have taken turns moonlighting in that spot in the lineup, utility-man J.T. Compher could be the key to turning the tide against the Lightning.

The 27-year-old forward is building upon his strong regular-season showing (18 goals and 15 assists in 70 games) and is tied for fourth in team goalscoring with five tallies in 14 games. Compher has been a steady presence in the faceoff dot, winning just over half of his total draws, with his 50.4% win rate ranking third on the Avalanche (minimum 100 faceoffs taken). His proficiency would rank second on the Lightning in these playoffs, suggesting he could make a difference in that department against a weaker group.

As the Avalanche rely heavily on their top powerplay unit, Kadri’s injury opens up room for a fill-in to skate with the primary group. Prior to being forced out of the lineup, the notoriously polarizing center acted as the fifth member of that feared quintet, playing 41 minutes with the man-advantage. Compher is currently ninth (nine minutes) on the team in powerplay deployment, although his increased scoring could lead to an uptick in ice time. Over the final two games of the Western Conference Final in the aftermath of Kadri’s injury, he played five minutes on the powerplay, sixth on the team over that sample. He’s not a top-end scorer, but his hot streak has earned him the chance to audition for the top group.

Compher has recently become something of a scapegoat, with his $3.5 million cap-hit leaving many hoping for a greater return on investment. Yet, he’s endeared himself with timely, momentum-shifting goals during this postseason and he can do even more to cement his future place on the roster with a significant display in the Stanley Cup Final.

The third player on this list, winger Andre Burakovsky, is arguably the most frustrating member of the Avalanche. An undoubtedly skilled player with the puck, he can leave others wanting more on the defensive end and sees his overall game struggle when he hits a cold streak. He excels in creating offence off of the rush (third on the team in rush attempts per-60-minutes) and bears much of the workload in terms of transitioning the puck, also ranking third on the team in offensive zone entries per-60.

During the regular season, Burakovksy finished fifth on the Avalanche in scoring, producing 61 points while being featured on the second powerplay unit. However, the playoffs have been a different story, as the Swedish forward is still stuck on a single goal and only five points through 10 games. His shot rate and shooting percentage (SH%) have plummeted, going from a 14.8 SH% on 6.87 shots per-60 in the regular season to 12.5% shooting on only 3.74 shots per-60 in this postseason. His inconsistency is a factor in his gradual demotion in the lineup, with only Kadri’s injury preventing a total usurping by the underrated Artturi Lehkonen on the second line.

The Avalanche need much more from Burakovksy heading into the Stanley Cup Final. The Lightning have made a habit of identifying and unleashing a number of role players who elevate their game come the postseason. It’s the reason they can observe significant turnover at the bottom of the roster year after year and still find themselves going deep in the playoffs. Assuming each team’s superstars cancel each other out, the championship round could easily come down to which supporting cast outperforms their counterparts. For the Avalanche to emerge victorious against this dynasty, Burakovsky must experience an abrupt return to form.

Avalanche Have What It Takes to Fulfill Stanley Cup Potential

The Avalanche have romped to the Stanley Cup Final, only losing two games through the first three rounds. They have done so without the services of Kadri and Samuel Girard, with their depth pieces punching above their weight. After several years of underwhelming playoff exits, the Avalanche are in a prime position to finally achieve their long-held championship aspirations. It’s been a long time coming for general manager Joe Sakic and the Avalanche organization – can they take the final step in an arduous journey and reach the promised land?

Data courtesy of AllThreeZones, Evolving-Hockey, and the NHL.

Marko is an aspiring sportswriter with a passion for crafting stories while using a combination of the eye-test and (shudder) analytics, which is complemented by an academic background in criminology and political science.

When not covering the Colorado Avalanche and Pittsburgh Penguins for The Hockey Writers, he can also be found pouring countless hours into various sports video games franchises, indulging in science fiction novels, and taking long runs around his neighbourhood.

Marko can be reached through his personal blog at unexpectedgoals.ca, and you can yell at him by following him on Twitter and other social media seen under articles like this one.

What’s next for the NHL and the Metaverse?
6 Predictions for the 2022 World Junior Championship
Provincial federations demand answers from Hockey Canada ahead of payment deadline
Hockey Canada chair resigns amid scandal fallout
Bears to retire Bourque’s number 17