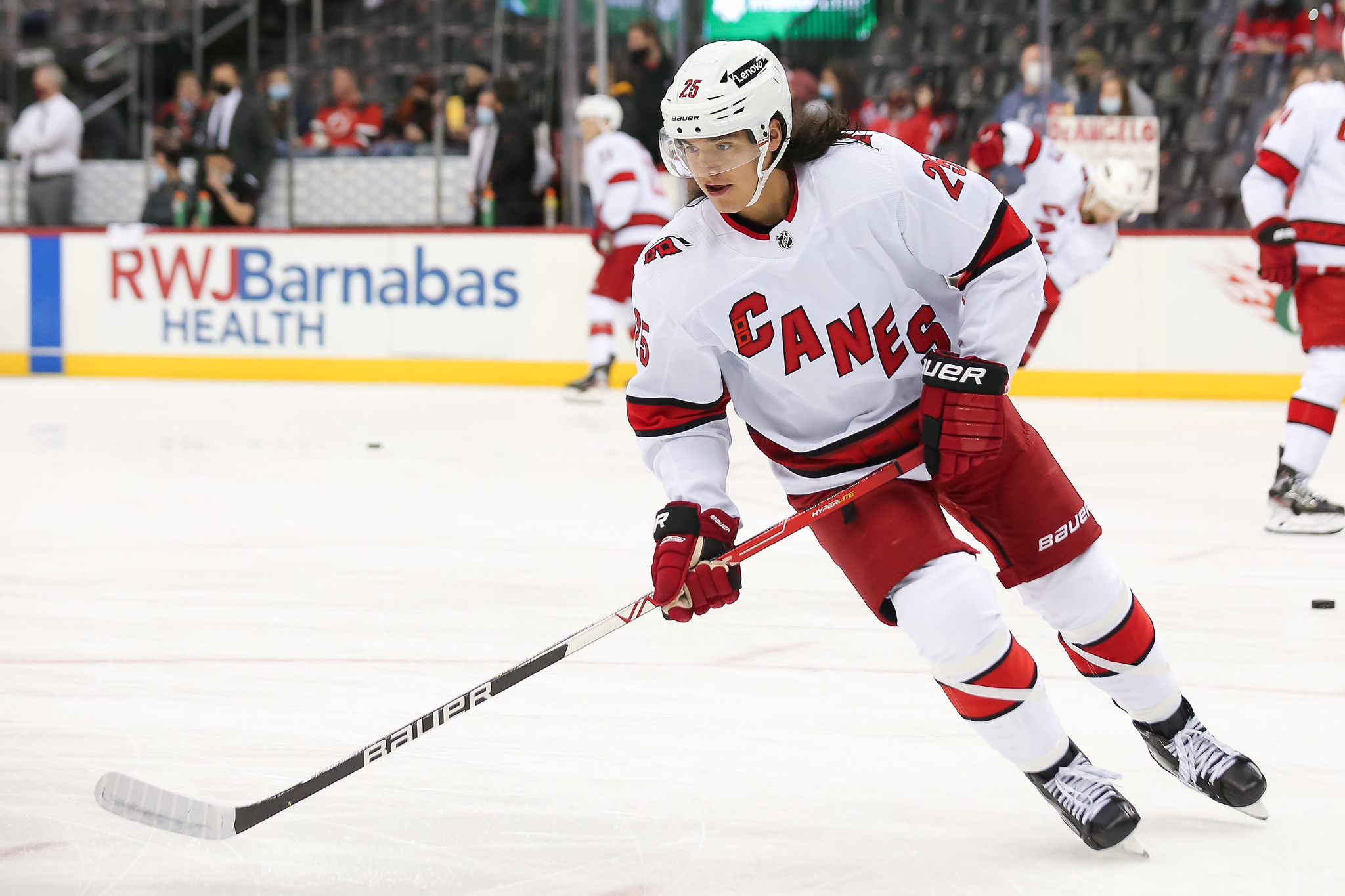 Goaltending and finding a scorer or two are the New Jersey Devils’ most significant needs this offseason. But that’s not the only thing general manager Tom Fitzgerald needs to address. While it is relatively minor in the big picture, rounding out the team’s defensive depth on their third pair should be on Fitzgerald’s to-do list, especially if the team doesn’t re-sign P.K. Subban.

One name who could be of interest to fill out the third pair is Carolina Hurricanes defenseman Ethan Bear, who’s a restricted free agent this offseason. Per Elliotte Friedman, the Hurricanes would like to re-sign Bear but have permitted him to speak to other teams, as the two sides are far apart in negotiations.

Bear finished this season with 14 points in 58 games, his lone year with the Hurricanes. While his counting totals might not suggest it, there’s the making of a capable two-way defenseman who has the potential to play higher up the lineup if needed, as he’s shown before.

Bear Is Better Than the Average Third-pair Defender

The Hurricanes acquired Bear last offseason in the trade that sent Warren Foegele to the Edmonton Oilers. For an analytically-savvy organization like the Hurricanes, acquiring Bear was no surprise. During his time with the Oilers, he posted strong underlying numbers.

In Bear’s two full seasons in Edmonton, he had an expected goals percentage (xG%) of 51.02 percent. Though he wasn’t much of an offensive defenseman, he was a valuable two-way presence with the Oilers. Both his even-strength offense and defense were worth expected goals above replacements (xGAR) of 4.9 and 6.6, respectively, and he was playing against fairly tough competition.

It makes you wonder why the Oilers traded him, but that’s a topic for another day. Instead, the Hurricanes saw an opportunity to improve their defense with Bear, and for the most part, his numbers in Carolina were positive. He finished with a Corsi for percentage (CF%) of 56.59 percent and 55.51 xG% this season. When combining his play with the Hurricanes and his two years with the Oilers, Bear ranks in the 81st percentile in wins above replacement (WAR) among his peers and has been particularly good at even strength:

While it might not seem like it because Bear doesn’t put up many points, there are signs of an efficient puck-moving defenseman. He’s quite good on the rush, both in generating shots and assists. He might not be Cale Makar exiting the defensive zone, but he’s not the type of a defenseman who chips the puck off the glass every time to relieve pressure. He successfully connects on breakout passes to escape the defensive zone.

Another strength of Bear’s game is his ability to deny opponents’ clean entries into the offensive zone. He stands up at the blue line and is quite good at zone-entry denial, something the Devils lack for the most part on their blue line aside from Jonas Siegenthaler. All of this is further visualized in this graphic from JFresh Hockey (note: this is for the 2021-22 season, but it is similar to how Bear played in Edmonton)

Because the Hurricanes would likely just be moving Bear’s negotiating rights, it should not take the Devils much to acquire him. They have three fourth-round picks and a pick in each round afterward in the 2022 draft, which should be the cost of acquiring negotiating rights. As for where he fits in the Devils’ lineup, let’s take a look.

Before getting into Bear and the Devils’ roster, let’s look at what he projects to land as an RFA this summer. Per Evolving-Hockey’s contract projections, they predict him to land a two-year deal worth a cap hit of $2.48 million as an RFA signing with a new team. The Devils have just over $25.3 million in cap space, so even after signing a goaltender and adding a scorer such as Kevin Fiala, who they’ve been connected to, re-signing Bear won’t be an issue.

If the Hurricanes plan to trade Bear because they can’t agree to a dollar figure, the Devils make sense as a fit if they’re looking for someone with NHL experience to partner with a young defenseman like Ty Smith or Kevin Bahl on the third pair:

If the Devils don’t re-sign Subban, they’ll have options. A handful of prospects in Bahl, Nikita Okhotiuk and Reilly Walsh saw playing time in the NHL to end this season. Bahl got the most extensive look, while Okhotiuk and Walsh got a cup of coffee over the final week or two of the season. Walsh was the Utica Comets’ (AHL) leading scorer among defensemen, while Okhotiuk provides a physical presence and plays with an edge. They could all be options if Fitzgerald and his staff think they’re ready to play in the NHL.

But if they aren’t, they’ll have to fill the void through free agency or a trade. If free agency is the route the Devils and Fitzgerald choose, there are some blueliners to consider. Justin Braun and Ilya Lyubushkin don’t provide much offense, if any at all, but they’re stout defensively. That’s especially true of Lyubushkin, who plays a physical game at 6-foot-2, 201 pounds. You also can’t rule out the Devils re-signing Subban, someone they’re familiar with and is well-liked by the organization.

If re-signing Subban falls through, or someone like Lyubushkin signs elsewhere, targeting Bear might be the Devils’ best option. Heck, he might be the best option regardless of who else they’re considering. Though he doesn’t score much, he fills a need for a bottom-pair defender who excels at entry denial but is also efficient on the rush. At 25 years old, he fits the Devils’ timeline and has more upside than signing a UFA, most of whom are in their late 20s or early 30s.

And even though Bear would be coming into play a third-pair role, he can play a bit higher up the lineup if needed. He did so in Edmonton in 2019-20 and was quite successful. Injuries are unavoidable in an 82-game season, too, so having someone like Bear who can move up when needed can go a long way. That’s also why adding a veteran with a solid track record might be a bit more enticing to the Devils than giving a prospect a roster spot, at least out of the gate.

Related: Devils Should Be Willing to Move 2nd-Overall Pick for Pastrnak

Bear should be pretty high among the Devils’ long list of defensemen they’re considering adding this offseason. At 25 years old and likely not looking at an expensive new deal, he’d be an ideal partner for Smith or Bahl and could help the Devils stabilize their blue line if injuries mount. For an organization that’s trying to end its rebuild and make some noise in the Metropolitan Division in 2022-23, they’ll need depth. And he’s the type of defenseman that can help them solidify their blue line.