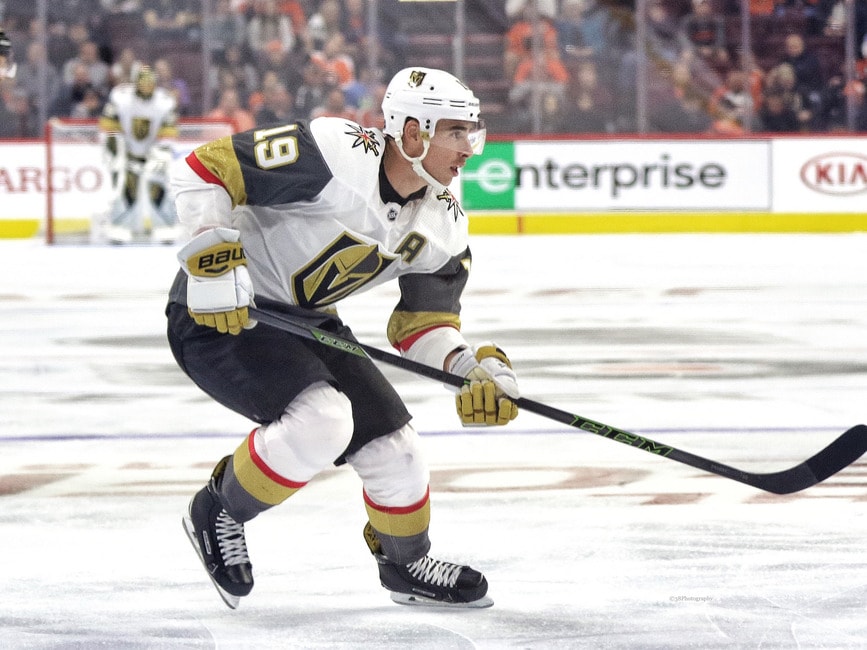 In this edition of Vegas Golden Knights News & Rumors, it sounds as though Reilly Smith has been signed to a contract extension, though specifics of the deal have yet to be released. Meanwhile, former head coach Pete DeBoer has been named the new bench boss for the Dallas Stars. In other news, in an attempt to free up cap space, the Golden Knights announced last week that they traded Evgenii Dadonov to the Montreal Canadiens in exchange for Shea Weber. Last but not least, it was announced on Tuesday that the club has agreed to a two-year extension with defenceman Daniil Miromanov.

Smith Has Verbal Agreement in Place With Golden Knights

According to Frank Seravalli of Daily Faceoff, the Golden Knights have a verbal agreement in place with Smith for a contract extension. Details of the extension have not yet been released, but it wouldn’t come as a major surprise to see it be similar to his last contract, one which was five years in length with an average annual value of $5 million.

This agreement comes as a rather big surprise given the Golden Knights’ lack of cap space at the moment, and suggests they will look to trade at least one, if not multiple players from their current roster this offseason. Nonetheless, bringing Smith back is great news for this team, as the 31-year-old has been a very dependable two-way forward for them over the past six seasons. In 56 outings over the 2021-22 campaign, he registered 16 goals and 38 points.

It didn’t take DeBoer much time to find a new job, as the Stars announced on Tuesday that they have hired him as their new head coach. The 54-year-old was fired by the Golden Knights just over a month ago after missing the playoffs, though many believed he was a scapegoat given the team’s injuries and the poor cap management throughout the entire season by general manager Kelly McCrimmon.

DeBoer spent parts of three seasons with the Golden Knights and has also spent time as the head coach for the San Jose Sharks, New Jersey Devils and the Florida Panthers. Throughout his entire coaching tenure, he has a record of 513-379-123, while with the Golden Knights he went 98-50-12. He will now look to turn the Stars’ fortunes around after they were eliminated in the first round by the Calgary Flames this past May.

In a somewhat surprising move this past week, the Golden Knights announced that they have acquired the contract of Weber in exchange for Dadonov. As many will remember, management attempted to trade Dadonov at this year’s trade deadline only to have the move rescinded due to the player’s modified no-trade clause.

This move was a cap dump for the Golden Knights, as Weber’s career is more than likely finished due to foot and ankle injuries that forced him to miss the entire 2021-22 season. This means that his entire $7.86 million cap hit can be placed on the long-term injured reserve, while the Golden Knights are now also off the hook for a $5 million deal.

While no longer the same caliber player he was from 2017-2020 with the Florida Panthers, Dadonov had a nice bounce-back season in his only year with the Golden Knights in 2021-22, recording 20 goals and 43 points in 78 games. He should help the Habs out offensively, an area in which they struggled this past season. He is also a player who could potentially be moved at the deadline for future assets if the Canadiens find themselves out of the playoff picture at that point and time.

On Tuesday, the Golden Knights announced that they have signed Miromanov to a two-year contract extension with an average annual value of $762,500. The 24-year-old undrafted defenceman spent the majority of the 2021-22 season in the American Hockey League with the Henderson Silver Knights, in which he had 11 goals and 40 points in 53 games. He was also able to get in his first 11 games at the NHL level, registering a lone assist.

While he remains a depth option at this point, he may be able to earn himself a spot on the opening day roster for the Golden Knights with a strong training camp. Due to their cap issues, having players fill holes on cheap deals is something they will need in 2022-23, and he may prove he has what it takes to provide them with just that.

Looking Ahead for the Golden Knights

With the firing of DeBoer and the subsequent hiring of Bruce Cassidy, it appears both management and coaching staff are in place for the Golden Knights for the 2022-23 season. That said, there are plenty of personnel changes that may take place as they look to get back into the playoffs after a very disappointing 2021-22 campaign.