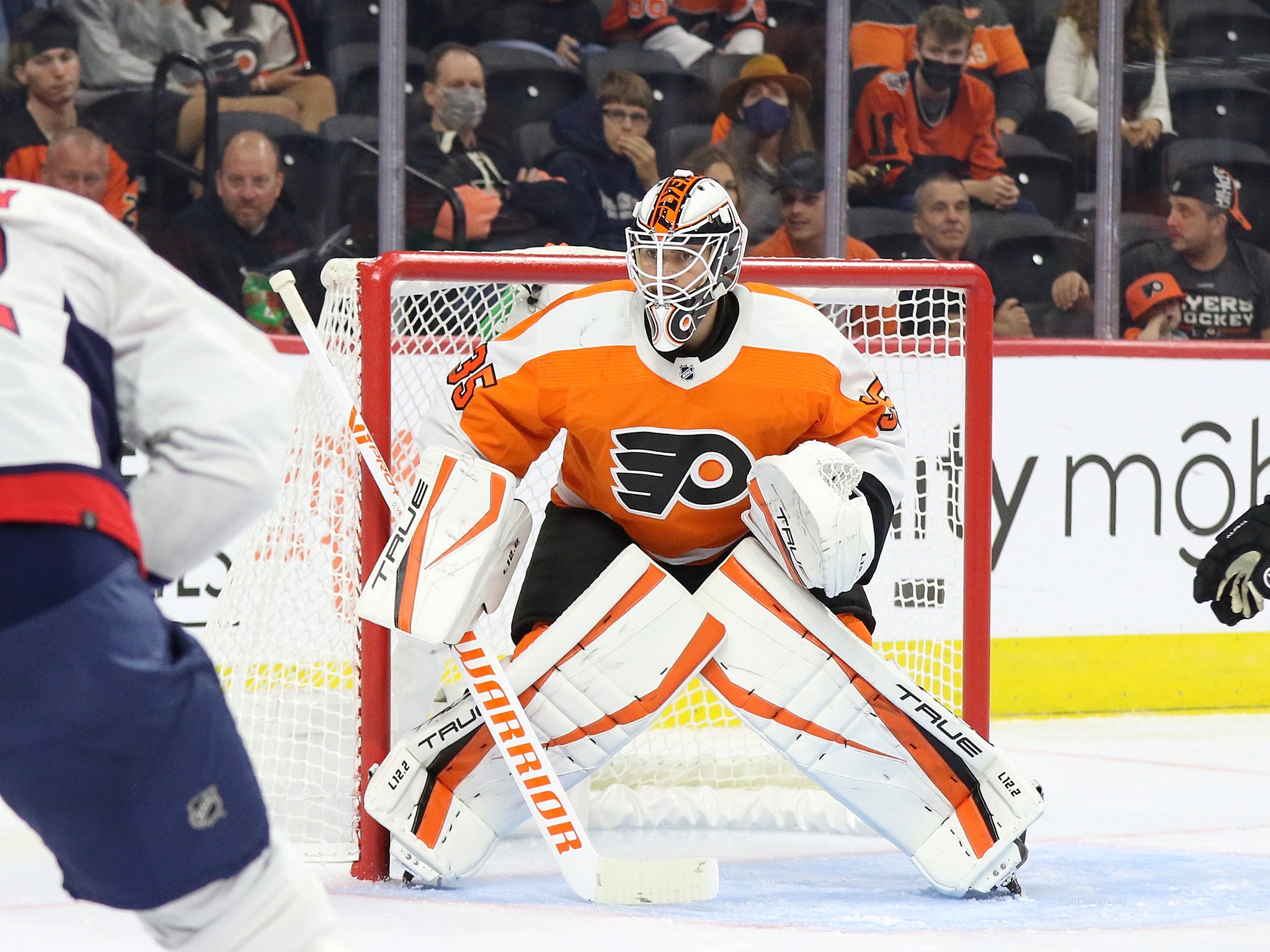 The Philadelphia Flyers don’t have as many big-time free agents this season as other teams; thus less to do in terms of re-signing and workable cap space. With that said, there are a number of young restricted free agents (RFA), a couple of veteran defensemen, and a goaltender to decide what to do with. Let’s take a look.

Morgan Frost and Owen Tippett are in the same position in their careers. They have accomplished all they are going to at the minor levels and just need to find their footing in the NHL. From the looks of it, they are going to be doing that together on the second line, as they played pretty well in that role late last season.

Related: Flyers Must Be Willing to Pay Price to Acquire Blackhawks’ DeBrincat

Frost has been a victim of injuries that have slowed his progression, but he appears to have middle-six potential as a centerman. He finished last season with five goals and 16 points in 55 NHL games playing around 14 minutes a night, which leaves something to be desired. He did end the season with two goals and four points in the final five games, so the hope is that can carry over and Frost can build on that next season in a full-time role.

Tippett, on the other hand, showed a little more offensive ability with 10 goals and 21 points in 63 games last season, split between the Florida Panthers and the Flyers. He was never able to stick in Florida since they are such a deep team up front, but his potential for growth is there, as he also ended the season on a high note with one goal and three points in his final four games.

Both players aren’t deserving of long-term deals at this point, and I don’t think they will want to sign one with a lower AAV (average annual value). A couple of short-term deals are on the horizon for Frost and Tippett, and it won’t be too difficult to get them signed since they are likely happy to get good playing time at the NHL level. Two to three-year bridge deals are likely in store at affordable prices, and the Flyers will see if either of them can elevate their game and break out during this important time.

Next up is a waiver claim in Zack MacEwen, who got into 73 games this season for the Flyers and plays the brand of hockey expected in Philadelphia and now especially expected by new coach John Tortorella. On the fact that MacEwen plays hard, works, and plays physical, I think Tortorella will have some influence in trying to get the forward back for at least one season to have him in his arsenal.

MacEwen is young and is a solid fourth-line player that may not produce offensively, but you know what you’re getting every shift. Since the team has a number of prospects on the fringe of playing in the NHL, he is a good option to have as a placeholder and rotate in on the fourth line. He will be cheap to bring back, and I expect with a one-year deal or something along those lines. He will get into a lot of games as the season goes on for the Flyers next season.

I suspect not only that veteran Nate Thompson has played his last game for the Flyers but his last in the NHL. I’m not too sure if any team is willing to sign a 37-year-old (soon to be 38) that has lost his touch and isn’t very impactful anymore. He hardly produced in the 33 games he got into, and even on a bottom-feeder like the Flyers last season, he only played that little amount of games. At this point, the Flyers are better off taking a chance on any number of their prospects over bringing back a player on his last legs after not contributing very much in any area.

The Flyers may very well opt to bring back their backup goaltender Martin Jones after an alright season behind a banged-up team. A .900 save percentage (SV%) isn’t exactly ideal, but it was better than each of the past three seasons and on a team that did worse and had much less help on the back end.

There isn’t much out there in the way of goaltenders at all via free agency unless the Flyers want to take a chance and make a sideways move. It’s still up in the air as to whether Felix Sandstrom is ready to be a full-time backup too, so the Flyers may have to bring back Jones on a one-year deal to allow Sandstrom to finish developing and to have support in a make-or-break season. Under Tortorella, his numbers should rise even more to receive the help he needs in order for any goaltender to succeed.

One of the bright spots for the Flyers last season was seeing Keith Yandle break the NHL’s ironman streak. Unfortunately, the Flyers also made the decision to hold him out of the lineup before reaching 1000 consecutive games. His time in Philadelphia is surely done after the way they handled that with where the Flyers were in the standings at that point. I’m not sure he would even want to return. But regardless, the team has prospects like Ronnie Attard and Egor Zamula, who will be in contention for a roster spot out of training camp.

As for Kevin Connauton, the Flyers already locked up Nick Seeler for two years a while back, so seeing as they both have similar roles as a sixth/seventh defenseman on the team, there’s no need for both of them. And as I mentioned, the Flyers will be willing to take a shot with their prospects over bringing back another veteran (age 32) on a deal.

Now, looking at three prospects who had a few games for the Flyers last season, Isaac Ratcliffe has the highest chance of playing the most games with the team next season. He made the biggest impact even though Hayden Hodgson got recognized. Ratcliffe is three years younger than Hodgson and is seen as a piece that they can hopefully build around. He showed promising play but was sent down to the American Hockey League (AHL) to get more playing time and finish developing.

Hodgson made the jump from the ECHL in 2020-21 to become an impactful player in the AHL last season. When he got his shot in the NHL for six games, he scored a goal and three points. He will likely spend most of his time in the AHL, but the Flyers should be willing to sign him and watch him start to come into his own a little later. As for Jackson Cates, Noah’s older brother, he hasn’t shown as much promise and even struggled to put up points in the AHL last season. I’m on the fence about if the Flyers should bring him back, as their prospect pool is becoming full of talent, and it was a tough switch over from university for him. Of the three, Cates may be the one the Flyers don’t decide to bring back on a short-term deal.

There’s still hope for Wade Allison if he can ever stay healthy enough to get going and develop properly, though he is getting to the age where it’s a defining point in his career. He played in 14 NHL games in 2020-21, putting up four goals and seven points but only got into one game for the Flyers this season. The same goes for Tanner Laczynski, who has also struggled with injuries himself.

Seeing as Laczynski is 25 years old and has six NHL games to his name, it’s safe to assume the Flyers are willing to part ways and make room for a younger prospect with more potential. As for Allison, I think the team gives him another chance to stay healthy and possibly even earn some more playing time on the Flyers this season. If he can stay healthy and contribute, things will look up from there.

The main things the Flyers must worry about are deciding which RFAs they want to bring back on short-term deals and figuring out if their best option for a backup goaltender is Jones. The rest of the players who should be lost to free agency will provide an opportunity to said RFAs.

Rob Couch is a THW freelance writer covering mainly the Edmonton Oilers and Philadelphia Flyers. He covers everything you need to know about fantasy hockey. He will also keep you up to date with NHL Stats News, trade talks, and daily betting guides.