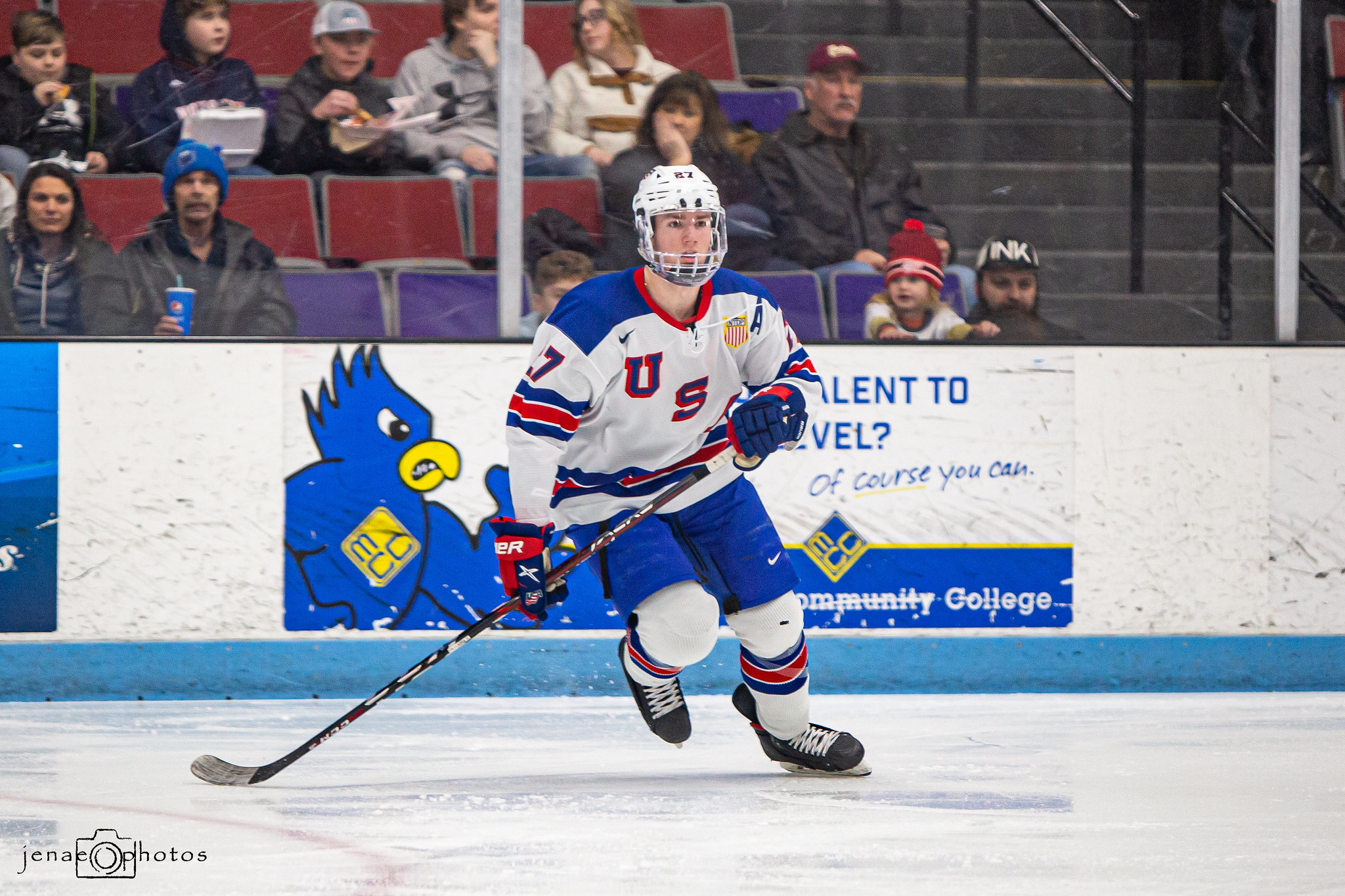 After Cale Makar of the Colorado Avalanche won the Norris and Conn Smythe Trophies en route to having his name etched onto the Stanley Cup, many Vancouver Canucks fans are probably wondering if that’s in the cards for a similar dynamic defenceman in Quinn Hughes. While the team around him is very different from the juggernaut that is the Avalanche, general manager (GM) Patrik Allvin could help the 22-year-old out by selecting his future partner in the 2022 NHL Draft, just like Joe Sakic helped his stud when he acquired Devon Toews from the New York Islanders.

When you watch Ryan Chesley play, the first thing you notice is his strong defensive game. Already well developed as a defensive defenceman with a high hockey IQ, he could possibly step into the league as a bottom-pairing option as soon as next season. That’s how good he is in the defensive zone already. In fact, Peter, who wrote his profile, chose him as a prospect who could potentially do just that in his draft-plus-1 campaign in a segment on THW’s Prospect Corner.

“Chesley is a very strong and reliable two-way defender with great hockey sense. He has a great work ethic but his bread and butter is his defensive play, as he possesses great instincts in his own end or in the neutral zone. He’s extremely confident and excels in one-on-one situations, as he does a fantastic job of closing the gap on the puck carrier.”

Chesley’s strengths definitely lie in the defensive zone, but that doesn’t mean he won’t develop an offensive game in the future too. His numbers at the U18 level don’t scream offensive force, but considering he scored 12 goals in the USDP and five in the United States Hockey League (USHL), along with two goals in six games at the U18s, he might have a higher ceiling than most people think.

Ranked everywhere from 72nd by SMAHT Scouting to 20th by FC Hockey and ISS Hockey and chosen 15th overall by Adam Kimelman in a mock draft published on NHL.com, the Canucks might benefit from trading down to select him. Here is what Kimelman had to say about his decision to draft him earlier than most have predicted.

“The Canucks need to add youth to their group of defensemen to go along with Quinn Hughes, and Chesley brings a bit of everything. A right-shot defenseman, he played primarily on the left side this season. He also played more of a shut-down role for the NTDP but showcased a high-end offensive game with the U-17 team in 2020-21 (34 points in 37 games). He’ll likely be able to showcase more of those offensive skills next season at the University of Minnesota.”

The package Chesley possesses sounds like a match made in heaven for a defenceman like Hughes. Like Makar, Hughes has developed his two-way game to a point that his name could be etched alongside his counterpart on the Norris Trophy. In fact, just this past season, Hughes earned nine total votes (two fourth place, three fifth place) for the coveted award. Could Chesley be the one to help push him over the top, like Toews did for Makar?

The Canucks might not be in a position to draft Noah Warren unless they acquire a second-round pick or he falls to the third round, but that doesn’t mean he should be forgotten about as a potential pick. Standing at a menacing 6-foot-5, 225 pounds, the right-handed St-Jean-sur-Richelieu, QC native has every tool a coach would want in a lock-down defenceman. From his responsible two-way game and poise with the puck to his physicality and willingness to block shots, he could turn out to be as good, or even better than Hughes’ former partner, Chris Tanev, who never was drafted into the NHL.

“Warren excels defensively, being aggressive to pressure opponents while providing his physical presence. He has no problem getting into shooting or passing lanes to breakup plays with a blocked shot or provide a stick check using his long reach. He’s quick on retrievals to regain possession and shift to offense. In transition, he displays great positioning and gap control to keep players to the outside. He provides a strong net front presence with his size as he does a great job to box opponents out.” – Peter Baracchini, The Hockey Writers

Playing in the Quebec Major Junior Hockey League (QMJHL), which is notoriously known for its offence rather than its great defence, Warren is considered one of its best shutdown defenders as he finished with an impressive plus-17 in the plus/minus column. While offence isn’t the thing that stands out the most about him, he does have some skills that could be developed, as he has a hard one-timer from the point and he isn’t afraid to jump into the rush. He also is fast enough in transition and has a good first pass to start the breakout from his own zone. Basically, another defenceman that has the skillset to potentially play with Hughes one day.

Finally, we have Lian Bichsel, another sizeable defenceman at 6-foot-5, 216 pounds. Primarily focused on his own zone and covering up the errors of his teammates, he played a whopping 29 games for Leksands IF in the Swedish Hockey League (SHL), where he scored a goal and three assists. Of course, not known for his prowess in the offensive zone, he has been known to rush the puck in at times and unleash his heavy slap shot.

If the Canucks are searching for a defenceman in the same vein as Tanev or Schenn, Bichsel or Warren should be high on their list as they both have size, and are physical and difficult to play against. With one of them on the ice, teams will think twice about taking liberties on the smaller Hughes. While he’s not a left-hand shot, he would still be an intriguing option as a potential partner down the road.

“Swiss defender Lian Bichsel stands at a towering 6-foot-5 and 216 pounds and he knows how to use it with his physicality, and his long reach to disrupt plays. The two-way defender surprises with the amount of skill he possesses, from his long, powerful strides to his overall offensive awareness, he shows top-four potential…” – Josh Bell, The Sporting News

Like Chesley, selecting Bichsel at 15th overall might be a little high considering the highest rankers and experts have him at is 24th (Sportsnet). If the Canucks are set on selecting a defender to complement Hughes that is slated to go later in the first round like Chesley or Bichsel, they should definitely look into trading down and potentially acquiring a second-round pick to go along with the lower selection.

Canucks Need To Find Hughes a Partner That Maximizes His Potential

Makar wouldn’t be the same defender he is today without the chemistry he’s developed with Toews. Ask any offensive defenceman who has had the privilege of having a calm, nearly mistake-free partner next to them on every shift, and they will all say the same thing, that he made their lives easier. The Canucks need to find Hughes that same type of long-term partner. Yes, Schenn plays great with him, now, but he’s 32 and on the downturn of his career. While it might take a few years for one of these three to develop into a defender capable of playing with Hughes, that still allows one of them to align with him in his prime when he reaches the 25-28 age range. Ideally, the time when the Canucks are perennial Stanley Cup contenders like the Avalanche are right now.

All in all, it’s going to be interesting to see what the Canucks do with their 15th overall pick. Will they hold onto it and draft a defenceman like Pavel Mintyukov or Denton Mateychuk, two that don’t necessarily mesh well with the offensively-minded Hughes, or trade down and acquire more assets to select someone like Bichsel, Chesley or Warren?

Heck, the Canucks could even draft a forward like Brad Lambert, Frank Nazar or Lucas Kasper. We won’t know until July 7 when Allvin steps up to the podium for the first time as GM or commissioner Gary Bettman utters the exciting words “we have a trade to announce.” With all the rumours floating around regarding J.T. Miller and Brock Boeser, they might even be in a position to select Simon Nemec or David Jiricek. If that happens, all bets are off.

Related: Canucks Need Slafkovsky, But Need a Draft Day Trade to Get Him

So, buckle up everyone, the next few weeks have the potential of being some of the wildest Canucks Nation has seen in a very long time. Keep it locked to The Hockey Writers as we will have it all for you from the 2022 NHL Draft on July 7-8 to free agency and beyond.