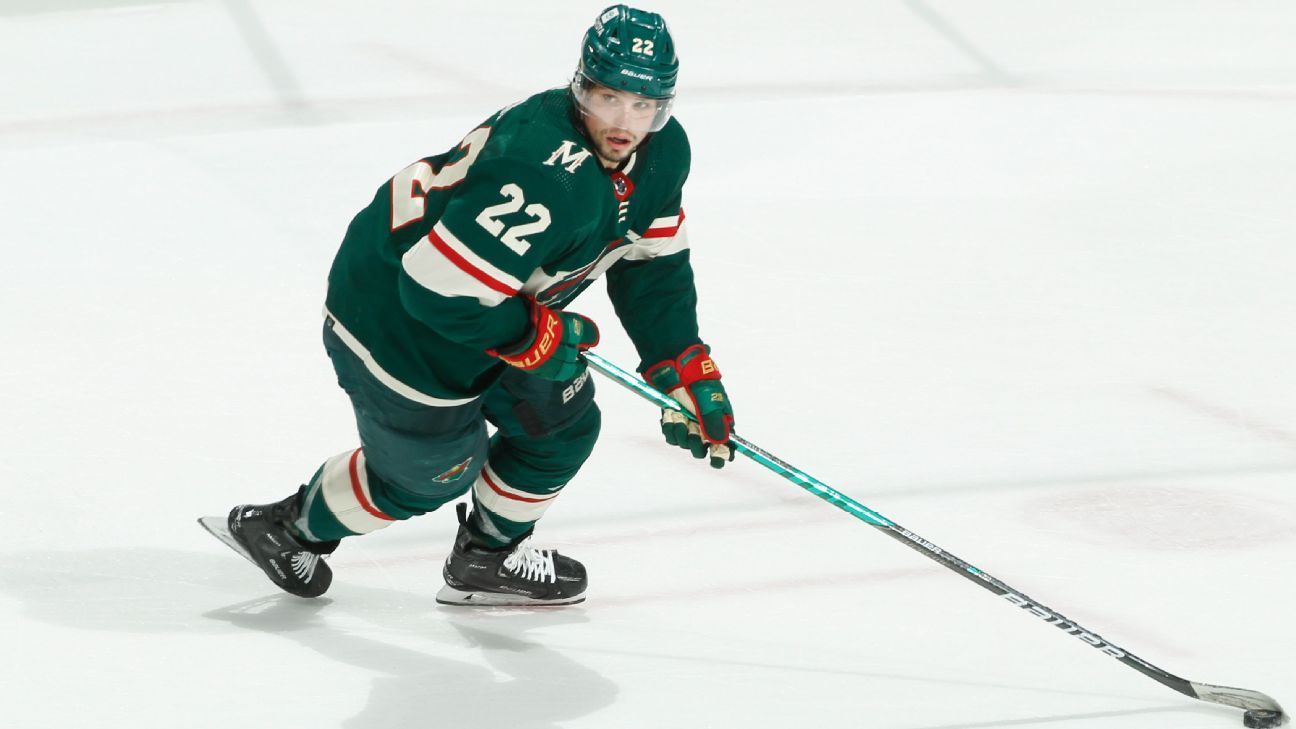 Facing a potential salary cap crunch down the line, the Minnesota Wild traded restricted free agent forward Kevin Fiala to the Los Angeles Kings, with a 2022 first-round pick (No. 19 overall) and defenseman prospect Brock Faber going the other direction.

The Swiss-born Fiala had a career-best 85 points in 82 regular-season games in 2021-22, and three points in six playoff contests. He will sign a contract extension with the Kings, sources told ESPN, and the new deal is expected to be for seven years with a $7.9 million average annual value.

It’s the first big trade of the NHL offseason, with the draft about a week away. Who comes out ahead? Let’s grade both GMs:

Using future assets to acquire talented players in their prime should be a familiar sight for Kings fans.

General manager Rob Blake worked under Dean Lombardi when he first joined the Kings managerial brain trust. Lombardi was the architect of two Stanley Cup winners with the Kings. One of the hallmarks of his tenure was the patience to amass a collection of solid prospects and high draft picks and wait until the time was right to utilize them. From February 2011 to February 2012, the Kings traded Wayne Simmonds, Brayden Schenn and Jack Johnson along with two first-round picks for centers Mike Richards and Jeff Carter and winger Dustin Penner. They won the first of their two Stanley Cups in 2012.

Fiala turns 26 in July. The Kings were 20th in goals-per-game average last season (2.87). Fiala scored 33 goals himself and assisted on 52 others for a stellar 3.5 points-per-60 minutes average last season in 82 games. He could fit rather nicely on a second line with center Phillip Danault. He also had 17 points on the power play, which will no doubt be a boon to the Kings, who were 27th in power-play conversion rate (16.1%) last season.

His goal output wasn’t the result of some unexpected spike ahead of a restricted free-agent contract: In fact, his 12.6% shooting percentage was in line with recent seasons. The difference was the 82 games, meaning that health will be a key factor in whether this trade and his new contract — reportedly seven years, $55.125 million through 2028-29 — are a success.

There’s a lot that says “A” territory here, so let me explain the parts of Fiala’s game I don’t like. For all of his dynamic 5-on-5 offense, he doesn’t exactly bring it defensively. Perhaps someone like Danault can help with that. But the biggest issue I’ve always had with him is the postseason. Fiala has a career 2.09 points-per-60 minutes average at 5-on-5 in the regular season. It drops to 0.93 in the postseason through 35 games. His goals-per-60 minutes rate at 5-on-5 in the regular season: 0.98. In the playoffs: 0.40.

Maybe this turns around on another team, but the fact remains he had nine points in 17 playoff games with the Wild in three opening-round series losses.

But overall, a solid pickup for the Kings, particularly because they were dealing from a position of strength: The 19th overall pick in a weaker draft and NCAA defenseman Brock Faber were not a major loss, considering the Kings’ deep pool of defensive prospects.

The Wild, on the other hand, were not dealing from a position of strength. Yes, they had a desirable player in Fiala, with the New Jersey Devils and others reportedly interested in his services. But those teams knew that the Wild had to trade the pending restricted free agent.

Minnesota bought out the contracts of forward Zach Parise and defenseman Ryan Suter last summer. They had just over $4.7 million in dead cap space last season due to those buyouts; that dead cap space increases to over $12.7 million this season and then $14.7 million through 2024-25.

A seven-part, behind-the-scenes docuseries going on and off the ice and in locker rooms for an all-access pass during the pursuit of the Stanley Cup. Watch on ESPN+

GM Bill Guerin said on Wednesday that to keep Fiala, “we’d have to trade three guys or two guys and deplete our team more.” Which they obviously weren’t going to do.

Getting a first-round pick back for Fiala was expected. They wouldn’t have moved him if they weren’t getting one. Now Guerin can use it or move it in the hopes of replacing the 33 goals that just left for the West Coast.

Getting Faber is the intriguing part of this trade. He was available because the Kings have a slew of right-handed defensemen in their system, from Sean Durzi and Jordan Spence to Brandt Clarke to Helge Grans. He’s a University of Minnesota player, which makes this obviously a little more interesting for the Wild. He also played for the U.S. men’s Olympic hockey team in Beijing.

Jon Rosen, who covers the Kings, said he “heard a few lukewarm assessments of his play” in the first half of 2021-22 season. David St-Louis of Elite Prospects counters with this: “Faber has always been much better than his numbers suggest. His skating, rush defense, and motor will make him an NHLer and his puck-moving ability could turn him into a top-4 defenseman [for a team] down the line.”

In a trade of necessity, the Wild could have done worse. Their strong track record for developing defensemen could have us looking at the Faber part of this differently in a few seasons.

Canada’s men’s U18 team defeats Finland 4-1 to advance to Hlinka Gretzky Cup final
Onyebuchi excited to be back for year two
3 Most Probable Teams to Sign Paul Stastny
6 Predictions for the 2022 World Junior Championship
Today in Hockey History: July 31