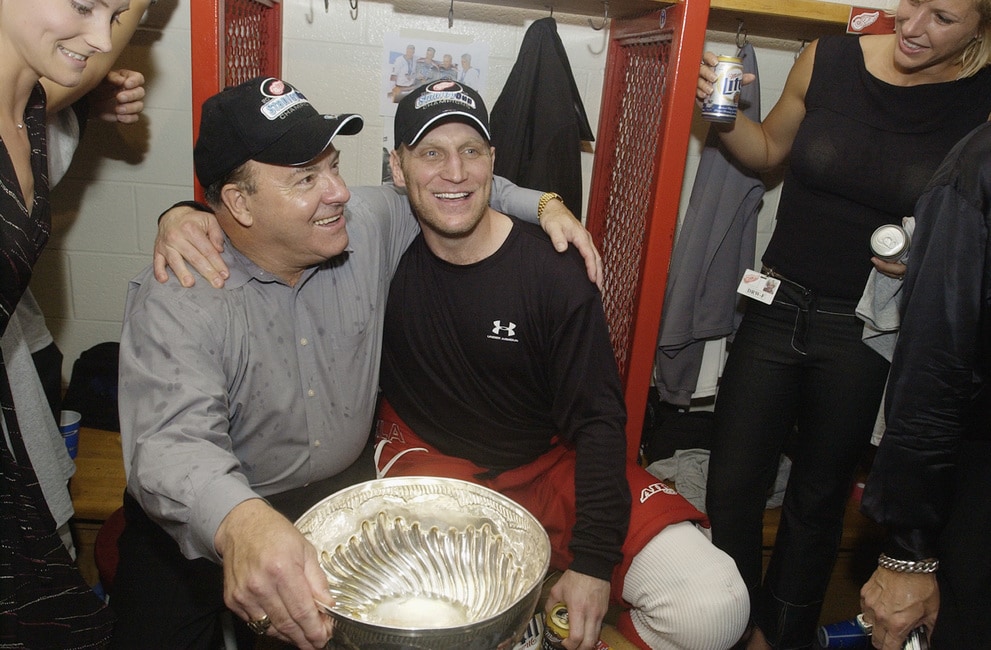 The 2001-02 Stanley Cup Champion Detroit Red Wings were a sight to behold. Their league-best 116 points were 15 more than any other team that season, and the roster was filled with NHL legends that helped capture the 10th championship in franchise history. Our countdown to Christmas continues by looking at the 10 Hockey Hall of Fame inductees who played on that legendary team.

Success starts at the top, and former Red Wings coach Scotty Bowman led by example. Bowman was the only member of the 2002 championship team who was already in the HHOF, inducted in 1991. His hockey career was cut short early due to a skull injury, so he turned to coaching, where he debuted with the St. Louis Blues in 1967.

Bowman won nine Stanley Cups in his career, with the Montreal Canadiens (5), Pittsburgh Penguins (1) and Red Wings (3). At age 87, he remains active in the league and has had an advisory role with the Chicago Blackhawks since 2008. His 1,244 wins as an NHL coach is a league record.

Offense Was a Star-Studded Affair

Imagine this: The 2001-02 Red Wings could field two full scoring lines with names that would be inducted into the Hockey Hall of Fame, and that’s not counting a young Pavel Datsyuk, who may hear his name called once he becomes eligible. Brendan Shanahan, Sergei Fedorov, Brett Hull, Luc Robitaille, Steve Yzerman, and Igor Larionov starred on a team that often asserted its will on the opposition. Combined, the six forwards amassed 347 points (152 goals, 195 assists) during that championship season.

Shanahan was inducted into the HHOF in 2013 after a career that spanned 1,524 games, 656 goals, 698 assists, and a plus-151. He was never one to back down from a challenge – although he led the 2002 team with 75 points, he was also second on the team in penalty minutes with 118. He won one King Clancy Memorial Trophy (awarded for his leadership qualities on the ice and in the Detroit community), was selected to the first or second All-Star team three times, and won three Stanley Cups in his career.

Yzerman, the captain, was the heart and soul of the team. His performance in the 2002 Playoffs was inspirational as he played the entire postseason on a knee that required realignment surgery while still leading the team with 23 points. Yzerman finished his career with three Stanley Cups, one Ted Lindsay Award (formerly the Lester B. Pearson Award), one Bill Masterton Memorial Award, one Selke Trophy, one Conn Smythe Trophy, and received one first-team All-Star selection.

Fedorov, inducted in 2015, was second on the team in points that season with 68. Also a three-time Stanley Cup winner, he won two Selke Trophies, one Ted Lindsay Award, and one Hart Memorial Trophy. In the 1993-94 season, Fedorov was selected as a first-team All-Star while also winning the Hart, Lindsay, and Selke awards, all while finishing fourth in voting for the Lady Byng Trophy.

Larionov, lovingly nicknamed “The Professor,” was inducted in 2008, and was incredibly productive in the 2002 Playoffs for a 42-year-old forward. A three-time Stanley Cup winner, Larionov had 11 points in 18 playoff games that season, and scored the triple-overtime goal in a pivotal Game 3 against the Carolina Hurricanes in the Stanley Cup Final. He finished his 14-year NHL career with 644 points in 921 games.

Hull, a two-time Stanley Cup winner, was inducted into the HHOF in 2009. He was also instrumental in Game 3 against the Hurricanes, tying the game with just over a minute left before Larionov won it three overtimes later. He won the Hart and Lindsay awards in the 1990-91 season, and the Lady Byng Trophy a season earlier. A three-time first or second-team All-Star, he finished his career with 1,391 points in 1,269 games.

Robitaille, another 2009 inductee, won his only Stanley Cup with the Red Wings in 2002. Though he doesn’t have as many championship rings as the other forwards on this list, he earned either first or second-team All-Star honors eight times in his career, and won the Calder Memorial Trophy in 1986-87 after notching 84 points in 79 games. He finished his career with 1,394 points in 1,431 career games.

Lidstrom is one of the most decorated Red Wings in franchise history. A 2015 inductee, he won seven Norris Trophies, four Stanley Cups, one Conn Smythe Trophy, and was selected as a first or second-team All-Star 12 times. He became the first European-born captain to win the Stanley Cup in 2008 and finished his career with 1,142 points in 1,564 games and a plus-450 rating.

Chelios, inducted in 2013, had a staggering 26-year career, playing in the NHL from 1983-84 through the 2009-10 season. A three-time Stanley Cup champion, he also won the Norris Trophy three times, and his 1,651 games played rank seventh in NHL history. He also won the first-ever Mark Messier Leadership Award in 2006-07 and was selected as a first or second-team All-Star seven times in his career.

Hasek created a stir when he arrived in Hockeytown before the 2001-02 season and he did not disappoint. A 2014 inductee, he won two Stanley Cups, two Hart Trophies, two Lindsay Awards, three Jennings Trophies, six Vezina trophies, and was selected as a first or second-team All-Star six times. Among goalies, he ranks 14th all-time in wins, eighth in shutouts, and finished with a career save percentage of .922 and a goals-against-average of 2.20.

Each Red Wings championship was special in its own way, but fans who witnessed the 2001-02 season had the luxury of watching some of the sport’s greatest players team up for one common goal. With a firm salary cap now in place, the likelihood of a team being assembled like this ever again is low, but the memory of watching this will never be erased.

A die-hard hockey fan in the desert, and proud Iowa State alum. Detroit Red Wings and Arizona Coyotes contributor for The Hockey Writers.