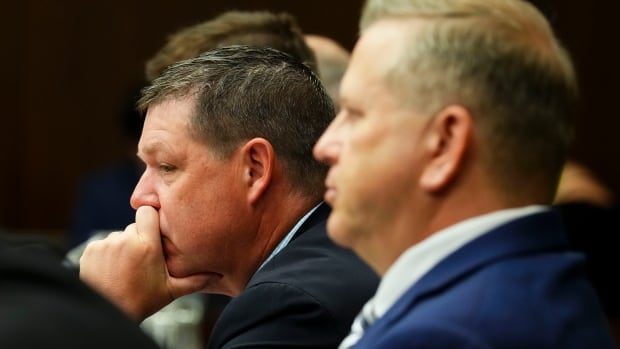 Hockey Canada executives told a House of Commons committee Wednesday that nine complainants alleging sexual abuse have received $7.6 million in settlements since 1989 from a dedicated fund maintained in part by membership fees.

Hockey Canada CEO Scott Smith told the standing committee on Canadian Heritage that he will not resign from his position. He told MPs he’s capable of creating change within the embattled organization.

Cairo said the fund is generated by Hockey Canada membership fees and investments.

Hockey Canada says it has paid out 9 settlement payments from the National Equity Fund totalling $7.6 million. The fund is made up in part by membership fees.

Both Cairo and Smith defended the existence of the fund, saying it’s necessary because the organization’s insurance won’t cover all types of claims. Cairo cited the James case as an example.

“The insurance companies were not going to insure us for those types of instances,” Cairo told the committee.

Hockey Canada announced earlier this month that it will no longer use the fund to settle sexual assault claims.

In May 2022, Hockey Canada settled a lawsuit seeking $3.55 million. The lawsuit was filed in April by a woman who alleges she was sexually assaulted by eight former CHL players after a Hockey Canada Foundation event in London, Ont., in June 2018.

The allegations have not been proven in court. The identities of the players allegedly involved and the alleged victim are not publicly known. The terms of the settlement, including how much Hockey Canada paid the complainant, are not public.

But Cairo told the committee earlier that Hockey Canada now intends to recover the money it spent in the settlement from AIG.

Lorenzetti said that was news to him.

“The subject, to my recollection or to my knowledge, never came up as to whether [AIG] would reopen the claim down the road if Hockey Canada sought from them compensation or indemnification,” Lorenzetti told the committee.

Hockey Canada CEO Scott Smith says that although he believes he’s the ‘right person to get Hockey Canada to the right place,’ he’s open to resigning and a governance review.

Lorenzetti said that, based on his experience in the insurance industry, the existence of Hockey Canada’s fund for settling claims is not unusual.

Hockey Canada hired an independent investigator, Henein Hutchison LLP, after it learned of the alleged assault. Police in London, Ont., launched a criminal investigation shortly after. At the committee Wednesday, the Hockey Canada executives said the firm was paid between $280,000 and $287,000 out of the National Equity Fund.

Smith and his predecessor, Tom Renney, testified before the committee on the alleged assault in June. Since then, the fund maintained by membership fees to settle sexual assault lawsuits came to light. Hockey Canada has also pledged to implement reforms to change the culture within the organization and address abusive and toxic behaviour.

London police recently announced that they’re reopening the investigation into the alleged 2018 assault.

Members of the 2003 world junior hockey team also are facing allegations related to an alleged group sexual assault in 2003.

Members of Hockey Canada’s leadership, including Smith, are facing multiple calls to resign and let a new team bring in changes to the organization and the sport.

“For the good of hockey, for the good of the countless volunteers across this country, the good work countless blameless people are doing in the sport of hockey, I strongly believe there needs to be new leadership within Hockey Canada,” Nater said.

Nater asked Hockey Canada’s CEO Scott Smith if he would agree to step down as his organization confronts allegations of sexual misconduct. Smith said he would step down if the board of directors decides his leadership is no longer needed.

“Will you do that? Will you step down for new leadership to take over?”

Smith said in response that he has no plans to resign.

“I’m prepared to take on this responsibility, for change within our game, I believe I’ve got the experience to do it,” he told the committee.

Smith said he’s prepared to step down if Hockey Canada’s board or a governance review team decides he’s not up to the task. He also apologized for how the organization initially responded to the 2018 case of alleged sexual assault.

“The Canadian public has lost confidence in Hockey Canada. Of that there is no doubt,” Julian said.

“I find this hearing today is really the last opportunity for Hockey Canada to establish some credibility.”

“I don’t think in any way they go far enough … there needs to be a bigger cultural change in Hockey Canada than you’re currently promising today,” he said.

“There’s times that good people have to step aside because the public has lost confidence in them, and I’m afraid this might be one of these times.”

Nater, Richard Martel and Karen Vecchi, three Conservative MPs on the committee, said in a media statement following the hearing that Hockey Canada is a “secretive and unaccountable organization.”

“It is clear that Hockey Canada sweeps cases under the rug and moves on,” the statement reads.

“Senior management within the organization has not shown Canadians that they are capable of taking the necessary actions to hold perpetrators accountable and prevent acts of sexual violence from occurring in the future. This has to change.”

Branch said there was one complaint of sexual misconduct directed at an OHL player in the same time period. That player was suspended, he said, and required to participate in educational programs as a condition of reinstatement.

Robison said the WHL has dealt with two reports of sexual misconduct over the last five years. He said police investigated both cases and the players involved were suspended from the league.

All commissioners testified that they did not report the cases to Hockey Canada.