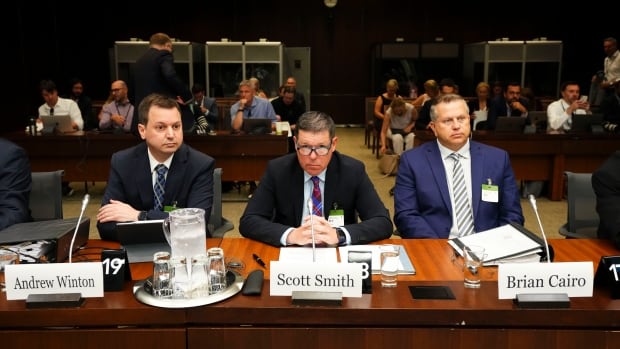 Warning: This story contains graphic details that may be disturbing to some readers

MPs called Hockey Canada executives before a parliamentary committee this week and made them swear under oath to tell the truth about an explosive scandal that is shaking the sports world.

The controversy started in May when Hockey Canada reached a settlement with a young woman who alleges she was sexually assaulted in London, Ont. in 2018 by eight Canadian Hockey League (CHL) hockey players, including members of the World Junior team.

Hockey Canada’s CFO Brian Cairo told MPs the organization settled the lawsuit because it was “the right thing to do” for the complainant and his organization.

“We didn’t know all the details of the night, but we did believe harm was caused,” said Cairo Wednesday.

The CHL said that if players are found to have broken the law, they will face criminal penalties and severe sanctions from the league.

As more and more critics call on Hockey Canada’s leaders to resign, the organization’s president and CEO Scott Smith has said he won’t step down unless he’s told to by the board of directors. Addressing the committee on Wednesday, he admitted that “many of the actions we are taking now should have been taken sooner, and faster.”

Over the past two months, Sport Canada — a branch of the federal Department of Heritage — has frozen its funding to Hockey Canada. Sponsors have dropped out and another, earlier allegation of sexual assault has surfaced.

Police in Halifax have opened an investigation into an allegation of a separate group sexual assault involving hockey players in 2003.

TSN reports that a source contacted Conservative MP John Nater and described a video showing about six players who were with Canada’s world junior team at the time having sex with a woman who was non-responsive and lying face up on a pool table.

Hockey Canada has paid 21 settlements for sexual misconduct since 1989

Hockey Canada officials revealed the organization has paid out nearly $9 million in settlements since 1989 to 21 people alleging sexual misconduct.

During seven hours of testimony on Hockey Canada’s handling of the alleged 2018 case this week, the minister in charge of Sports Canada and Hockey Canada’s leadership revealed new information about the claims, what they knew and the scope of the organization’s culture problem.

Here’s what you need to know.

What are the allegations?

A woman who was 20 at the time alleges eight unnamed CHL players, including some on Canada’s U20 men’s world junior hockey team, sexually assaulted her on June 19, 2018, according to her statement of claim filed in a $3.5 million lawsuit in April 2022.

World Juniors champions were in London, Ont. at that time as part of the Hockey Canada Foundation Gala and Golf event.

The woman alleges an unnamed hockey player bought her alcoholic drinks at a local bar. She claims that she became visibly drunk and was seen stumbling and slurring her speech.

Over several hours, according to the statement of claim, the group of hockey players placed their genitals on her face, slapped her buttock, spit on her, ejaculated on her and engaged in vaginal intercourse while she was too intoxicated to consent.

The young woman said at some points she was crying and tried to leave the room but was “directed, manipulated and intimidated into remaining,” her statement of claim said.

“Any reasonable person, acting reasonably, would have concluded that [she] was not freely consenting in those circumstances and would have ceased the confinement of [her] and the sexual behaviours toward her,” says the statement of claim.

The claim says that after the sexual assault ended, the players filmed the young woman, instructed her to say she was sober and told her to shower.

The statement of claim also alleges the players pressured the young woman not to report the allegations or cooperate with a police investigation.

Hockey Canada is accused in the statement of claim of failing to address systemic abuse in its organization and condoning a “culture and environment that glorified the degradation and sexual exploitation of young women.”

The claims have not been proven in court. Hockey Canada did not file a statement of defence.

CBC News has contacted the woman’s lawyer, who said she has not been commenting publicly on the case. Hockey Canada has since announced an action plan to change what it calls its “toxic” culture.

How much compensation did the complainant receive?

The young woman claimed damages of about $3.5 million in her statement of claim.

Smith said Hockey Canada’s board of directors agreed to pay the claimant up to $3.5 million.

As part of the settlement, the woman signed a non-disclosure agreement which puts strict limits on what she can say about the matter.

Who has been accused?

The players accused have not been named publicly.

There were about 22 players on the world junior team in 2018 and all of them had signed professional contracts. Two players on the team ended up returning to the CHL.

A third-party investigator hired by Hockey Canada to look into the matter told MPs a lawyer for the players said they fear they’re being pre-judged as guilty.

Multiple players from the team have released statements since May saying they were not at the event in London, or were not involved in what happened, or were unaware of what happened.

What happened to the criminal investigation?

London police closed the investigation into the 2018 allegations in February 2019 without laying any criminal charges.

Following an eruption of public outrage, London’s police chief announced last week that it would conduct an internal review to “determine what, if any, additional investigative avenues exist.”

What happened to Hockey Canada’s investigation?

Two days later, according to the law firm, Hockey Canada retained the firm to conduct a third party investigation with a mandate to discover the truth and identify any systemic or policy issues.

One of the firm’s partners, Danielle Robitaille, led the investigation and reported that in 2018 she interviewed 10 out of 19 players who attended the event, along with coaches and staff. Nine of the players — along with the complainant — said they won’t participate in the law firm’s probe until the police investigation is complete.

Robitaille appeared before a standing House of Commons committee examining allegations of sexual abuse in the sport. Robitaille said legal counsel for eight of the nine players with whom she hasn’t spoken told her they’re concerned about being pre-judged by Hockey Canada.

When the criminal case closed, Robitalle said, she focused for 18 months on convincing the complainant to participate in her investigation.

The firm closed its investigation in Sept. 2020 ”without prejudice to reopening it later” because the complainant declined to provide her account of what happened, said Robitaille.

Robitaille said she concluded she should not interview the rest of the players without speaking to the complainant because she “needed her version of events to push forward in my investigation.”

Henein Hutchison reopened the investigation in July after the complainant said she was prepared to participate. The complainant has since provided a statement to the law firm.

What did Sport Canada know?

Hockey Canada told Sport Canada about the allegation in 2018, but the department never informed the federal minister of sport’s office.

About a week before Sport Canada was notified about the alleged 2018 incident, then-sport minister Kirsty Duncan announced a new directive ordering all federally-funded sport organizations to disclose to her office “any incident of harassment, abuse or discrimination that could compromise the project or programming.”

Michel Ruest, Sport Canada’s senior director, told MPs that no one at Sport Canada notified the minister’s office of the case or followed up with Hockey Canada over the past four years to find out what had happened.

Current Sport Minister Pascale St-Onge has said she did not know of the allegations until this year. St-Onge announced in June that, going forward, Sport Canada will have to inform her of all such allegations.

WATCH: Sport Canada knew of allegations as early as 2018

Sport Canada knew about Hockey Canada allegations as early as 2018

Sport Canada, a federal department, knew in 2018 about sexual misconduct allegations at Hockey Canada, but did not investigate, an official tells a House of Commons committee. Meanwhile, the federal minister of sport testifies that she was not informed until last year.

How much has Hockey Canada paid to settle sexual abuse claims?

Hockey Canada has paid $8.9 million to 21 complainants since 1989. This figure does not include the settlement connected to the 2018 alleged group sexual assault case.

The bulk of the money — $6.8 million — was compensation for complainants in the case of Graham James, a former junior ice hockey coach who was accused of sexually abusing players on his teams.

Hockey Canada said it believed that all the recipients of its compensation signed non-disclosure agreements as part of their settlement agreements which restrict what they can say publicly.

Where did the settlement money come from?

Hockey Canada told MPs it took $7.6 million out of the National Equity Fund, which is funded in part by minor hockey league registration fees — a fact that has sparked public outrage. Hockey Canada said this month it would no longer use the fund to settle such claims.

Another $1.3 million came from Hockey Canada’s insurance, its officials told the committee.

Like many sports organizations, Hockey Canada has an insurance policy to cover sexual misconduct claims. AIG Canada is the provider.

Hockey Canada officials told MPs that they didn’t think the claim related to the alleged 2018 incident would be covered entirely by insurance and didn’t want to wait up to two years to find out. Hockey Canada said it asked AIG if it could settle the matter on its own and was given permission.

The hockey organization said it now wants to recover the money it spent on the 2018 settlement from AIG.

Why is the National Equity Fund used to pay out settlements?

Cairo told MPs the fund was set up in 1995 because its commercial liability insurance doesn’t cover all risk.

The insurance companies were not going to insure Hockey Canada for things like the Graham James case, he said.

Calls are mounting for senior leaders at Hockey Canada to step down. A number of MPs from different parties said the public’s trust in the organization has evaporated.

Former NHL player and sexual abuse survivor Sheldon Kennedy also released a statement calling on Hockey Canada’s CEO and board of directors to resign, saying the “same people with a new plan expecting different results is the definition of insanity.”

Smith told MPs he wants to lead the culture change at Hockey Canada and would not resign unless the board of directors told him to.

Glen McCurdie, who was Hockey Canada’s vice-president of insurance and risk management when the 2018 claim was made, retired in December 2021. He was the key figure involved in responding to the sex assault allegation.

McCurdie told MPs on Wednesday that his departure from Hockey Canada “had nothing to do with the serious allegations stemming from the Foundation gala, nor from the management of that matter at Hockey Canada.”