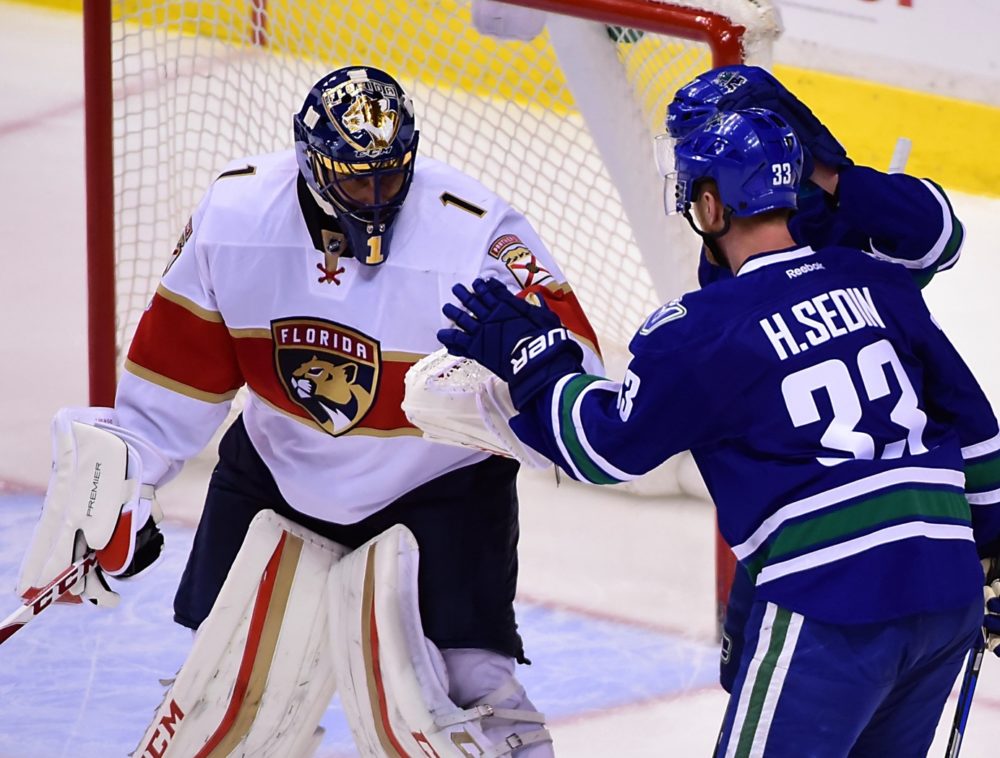 After eight seasons with the Vancouver Canucks, Roberto Luongo was traded back to the Florida Panthers on March 4, 2014, along with Steven Anthony in exchange for Jacob Markstrom and Shawn Matthias.

Luongo’s eight seasons in Vancouver saw the team reach the playoffs six times and featured a Stanley Cup Final appearance. While the Canucks traded away an elite starting goaltender, they received Markstrom, a goalie with tons of promise who struggled at the start of his career and Matthias, who added forward depth to the team.

Luongo was traded to Vancouver after the 2005-06 season with Lukas Krajicek for Todd Bertuzzi, Bryan Allen, and Alex Auld. In his first season with the team, he was nominated for the Hart Memorial Trophy and Vezina Trophy but came in second for both awards. In each of his first five seasons with the Canucks, he was in the top-10 in the Vezina Trophy voting.

Along with Cory Schneider, Luongo was awarded the William M. Jennings Trophy for allowing the fewest goals against in the 2010-11 season. He was named captain prior to the 2008-09 season but relinquished the captaincy two seasons later. The Canucks then traded him to the Panthers after he requested a trade.

In Luongo’s first full season in Florida, they made the playoffs. They lost to the New York Islanders in six games, though, and it was the last time Luongo was on the ice for a playoff game. The 2015-16 season was also the last time he played a full season as a starter, and he retired after the 2018-19 season. Earlier this month, the Panthers retired Luongo’s jersey, which made him the first player in franchise history to have that honor.

Markstrom was drafted with the 31st-overall pick in the 2008 NHL draft by the Panthers. He struggled to stay with the main roster in his two seasons after being drafted, but, in the lockout-shortened 2012-13 season, he started 23 of the 48 games for the Panthers, but the organization traded him after he spent the start of the 2013-14 season in the AHL.

During his first few seasons with the Canucks, Markstrom was a backup to Ryan Miller before becoming the starting goaltender in the 2017-18 season. In his second season as the starter, Markstrom posted a winning record and followed it up in 2019-20 with a Vezina-worthy season.

Markstrom played in the 2020 All-Star Game along with Elias Pettersson and Quinn Hughes, making him the first Canuck goaltender to appear in the game since Luongo. Six seasons after being traded to Vancouver, Markstrom proved to be a great replacement for Luongo. He signed with the Calgary Flames as a free agent during the 2020 offseason.

Shawn Matthias and His Career Year

Matthias only played one full season with the Canucks and statistically, it was his best season in his 11-year career. He scored his first career hat trick and posted 18 goals and 27 points in 78 games. He then signed a one year, $2.3 million contract with the Toronto Maple Leafs but struggled to produce similar to how he had in Vancouver and was traded to the Colorado Avalanche after 51 games.

A two-year contract with the Winnipeg Jets then followed, but Matthias played only 72 games over those two seasons and he has not played a game in the NHL since the 2017-18 season.

Luongo
Trade Paying Off for Vancouver

Steven Anthony was the other piece in the trade but never played in the NHL or AHL. When the Canucks traded Luongo, it seemed as if the team had lost an elite goalie for unproven talent. This season, Markstrom has shown that the Canucks acquired equal value in the trade – he has been successful over the past two seasons and is a big reason the team is in a position to reach the playoffs this season.

Luongo was not a starting goaltender with the Panthers for too long, while Markstrom is starting to pay off as a starter now. Matthias had a short-lived run with the team but was useful in helping the team make the playoffs in the 2014-15 season.

Luongo will be remembered as one of the greatest goaltenders in Canucks history and the team would’ve wasted his last seasons as they were in a rebuild. Keeping him would’ve hurt the Canucks rebuild while acquiring Markstrom allowed for him to develop into the goalie he is today and allowed the team to draft players such as Pettersson and Hughes.

Sartaaj has been watching hockey for over 15 years and covers the Vancouver Canucks for The Hockey Writers.