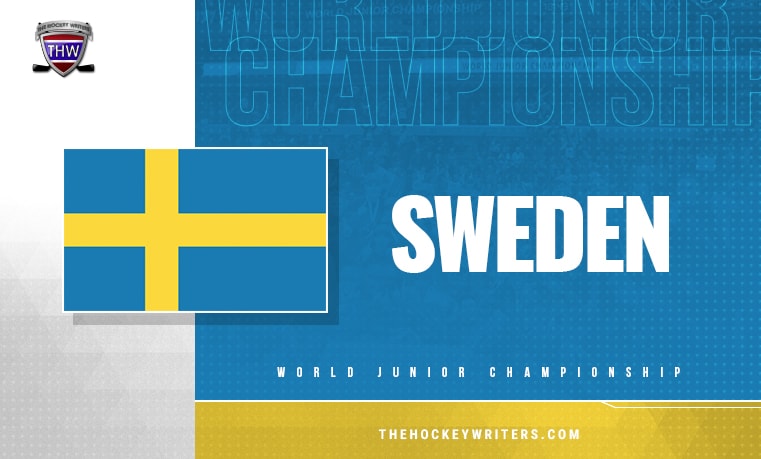 Sweden enters the 2022 World Junior Championship with one thing on its mind – retribution. Last year they brought one of the most exciting rosters to the tournament, hungry to improve on their bronze-medal finish in 2020, and they had the roster to do it. Their defense featured three returnees in Victor Soderstrom, Tobias Bjornfot, and Philip Broberg, plus two of the deadliest prospects in the world in Lucas Raymond and Alexander Holtz. But the experienced group could not handle the Russians or Americans, then gave up a two-goal lead against Finland in the first round of the playoffs and lost 3-2. Several stars failed to show up when it counted; Noel Gunler, their top scorer, finished with just five points.

This year, the Swedes will seek to make things right and return home with a medal, and all the pieces are in place for them to do so. They have one of the oldest rosters in the tournament, where 19-year-olds have a significant advantage. They also brought back seven players from last year’s roster, including Holtz, who comes with NHL experience under his belt. However, if 2021 taught Sweden anything, it’s that they can bring all the talent they want, but they need their best players to carry their team. Here are three players who will have the biggest impact on the team’s success in Red Deer and Edmonton this year.

It was somewhat surprising when the Detroit Red Wings called Simon Edvinsson’s name sixth overall at last season’s NHL Draft, making him the third defender off the board. It wasn’t that he wasn’t talented; he’d been compared to fellow Swedish blueliner Victor Hedman, who went second overall in 2009 for most of the year, and the two had plenty of similarities. But with top-ranked European William Eklund still on the board paired with the fact that Edvinsson was seen as a project, some saw the pick as a bit of a risk.

Fast forward five months, and those criticisms have faded into barely a whisper. Edvinsson has emerged as not only one of the best young defensemen in Sweden but one of the best U20 players. He’s been one of the few 18-year-olds to play the entire 2021-22 season in the Swedish Hockey League (SHL), and after 23 games, he leads all U20 players with 12 points. He has great speed and offensive instincts, and he can use his size and strength to simply go through opponents while keeping the puck on his stick. But he’s also defensively aware, using his frame and long reach to cut off passing lanes.

With only Emil Andrae returning to Sweden’s defense, they’ll need others to step up and take on a bigger role. Edvinsson is the most capable of doing that after excelling at the Four Nations Tournament this season and possesses one of the most dynamic tool kits of any defender of the 2021 draft class. If he catches fire at the tournament, Sweden will be incredibly difficult to handle.

Fans know what Holtz can do at the World Juniors. As a 17-year-old, he was the sixth-highest scorer for Sweden, and although he had an underwhelming 2021 tournament (along with everyone else), he still ranked in the top-10 on the team in both goals and points. Now, with both NHL and AHL experience under his belt, including 10 points in 10 games with the Utica Comets, it’s practically a given that he’ll be one of the most dangerous players at the tournament. But what’s not so certain is how the 19-year-old Eklund will fare in his first World Junior Championship.

Like Holtz, Eklund made the journey to North America to start the 2021-22 season, but instead of starting in the AHL, the 2021 seventh-overall pick was placed immediately in the San Jose Sharks’ lineup. His rookie season got off to a great start, and he recorded an assist in each of his first three NHL games. However, after nine games, Sharks’ general manager Doug Wilson decided to return him to Sweden, partly to allow him to play in the World Juniors.

“William’s tremendous skill and vision have been evident since his participation in our rookie tournament in September. In his nine NHL games as a teenager, he has shown that he is going to be a special player in this league. But ultimately we feel it is in the best interest of his long-term development to return to Sweden and continue to work on becoming the dominant player we know he can be.”

Now back in Sweden, no U20 player in the SHL has been hotter. In just eight games, Eklund already has five assists, three of which came in his first two games back in his home country. He’s a deadly playmaker with speed to burn, and paired with Holtz on the top line; the pair could become a lethal duo to other nation’s goalies. The only concern is how he’ll fare in his first tournament, as it often is a big step up in competition from other junior events. However, he would have been at the 2021 tournament had he not tested positive for COVID-19, and with his NHL experience and success in the SHL, he could be Sweden’s most important player this year.

Russia’s Yaroslav Askarov has held the title of top goalie prospect for several years now, going back to his first World Junior appearance in 2020. But he may have a challenger on his heels in Wallstedt, who will be getting his first chance to start at the U20 level this year. The 6-foot-3 Swede has dominated the international circuit since 2017 at the U16s but has rarely been Sweden’s top option due to his age. In 2022, however, the crease is all his, and the whole world will be watching to see how good he truly is.

North American fans have a rough idea of Wallstedt’s talent after being selected 20th overall in the 2021 NHL Draft. After all, few goalies are chosen in the first round unless they’re bona fide all-stars. But they may not know just how good a player the Minnesota Wild ended up with. He made his first SHL appearance with Luleå HF as a 16-year-old, playing a single game where he ended up with a 1.55 goals-against average (GAA) and a 0.944 save percentage (SV%) the best numbers in both categories of the entire league that season. He was named the team’s starter and had the fifth-lowest GAA as a sophomore. In his third season with the team, he sits second in the league with a 1.88 GAA and fifth with a 0.914 SV%. And he’s only one of two U20 goalies to start an SHL game this season.

However, like Askarov, Wallstedt has faltered under the spotlight. After starting 22 games in the 2020-21 season, he lost his job in the playoffs after two rough outings that left him with a 3.36 GAA and a 0.871 SV%. He also hasn’t been his regular lights-out self internationally this season, taking a backseat to Calle Clang, who will join him at the World Juniors. When Wallstedt is on, there is no one better, but if he gets off to a slow start, the Swedes will likely not hesitate to go with their second option.

Sweden has the potential to be the most exciting team at the 2022 World Junior Championship. Zion Nybeck, Emil Andrae, Oskar Olausson, Helge Grans, and Fabian Lysell are just a few players on the roster that possess game-breaking abilities. If they get rolling, this team will be nearly impossible to contain. But whether Sweden wins a medal will largely come down to how Edvinsson, Eklund, and Wallstedt perform.

While it’s unfair to pin the success of a team on just a few players, Sweden won’t have the same level of skill as years previous. Raymond is still with the Red Wings, and the team’s defense has far fewer recognizable names, especially after they cut 2020 second-round pick William Wallinder. That means much of the heavy lifting will fall to the three players mentioned above, and more so than anyone else, they’ll need to be at their best at all times. Otherwise, Sweden’s dreams of ending their gold-medal drought will have to wait at least another year.

An elementary teacher by day and an avid hockey fan, Dayton joined The Hockey Writers in 2019 and currently covers the Ottawa Senators, World Juniors, and NHL Entry Draft.