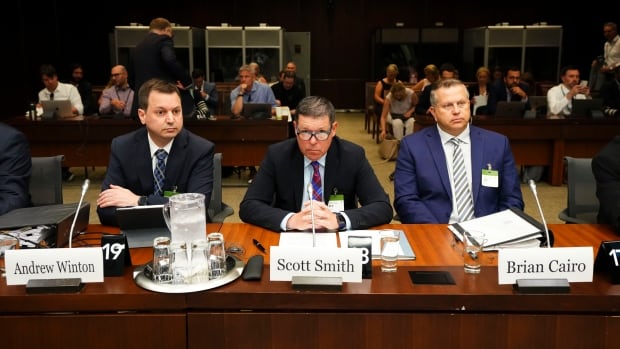 Hockey Canada has dropped a non-disclosure agreement with the complainant of a high-profile alleged group sexual assault in 2018 involving eight hockey players including some members of the world junior team, CBC News has learned.

The complainant’s lawyer Rob Talach says Hockey Canada approached his client on July 22 and asked if she wanted to be released from the agreement that prohibited her from publicly disclosing information about the case.

“I give them credit to say that they thought it was only fair in the circumstances of how things were unrolling publicly,” Talach told CBC News in an interview.

The non-disclosure agreement (NDA) was officially withdrawn the day before Hockey Canada’s executives testified before a parliamentary committee on July 27 probing the organization’s handling of the alleged sexual assault case.

Hockey Canada’s president Scott Smith faced questions from MPs about the NDA during the committee. NDP MP Peter Julian called on him to release complainants from them if they want because it perpetuates a “culture of silence” when “victims are silenced.”

“If they wish to eliminate those, unless there is a legal reason not to that I’m aware of, I’m not sure why we wouldn’t,” said Scott when asked if he would withdraw the agreements. “Our priority is to support the victims.”

Smith told the committee last month that Hockey Canada reached out proactively to Talach after “media reports were representing comments on behalf of players” and “suggested she should be given the right to respond to the events of the evening as well.” Hockey Canada shared Talach’s response privately with MPs, but did not disclose it publicly.

NDAs used in other settlements

During the committee it was revealed that non-disclosure agreements were also used in other settlements involving sexual assault allegations, according to Hockey Canada’s former VP of risk management Glen McCurdie.

Hockey Canada clarified on Monday that non-disclosure agreements were not used in every single settlement.

“In some cases, the only confidentiality terms concerned the amount of the settlement, which is commonly included in almost every settlement of every claim in Canada, including sexual abuse claims…,” wrote Hockey Canada in a statement to CBC News.

The Hockey Canada controversy has put a new spotlight on the issue of NDAs, which are common in settling lawsuits. There are mounting calls by some advocates to ban them in cases related to sexual assault.

P.E.I became the first province in May to limit the use of the agreements in cases to stop silencing victims of harassment and sexual misconduct. Some legal experts and legislators argue NDAs protect institutions and perpetrators and drive allegations underground allowing the culture problems to continue.

Hockey Canada is in the midst of a crisis as it deals with public outrage over its handling of sexual assault claims and use of a special fund — in part made up of registration fees — to pay for legal settlements. Sponsors have dropped support, the NHL is investigating and police have opened a new investigation into a separate 2003 group sexual assault case.

The public controversy started after Talach’s client’s filed $3.5-million lawsuit in April that said in 2018, eight hockey players including members of Canada’s world junior team sexually assaulted, humiliated and degraded her at a hotel room in London, Ont.

The statement of claim, which has not been proven in court, said the hockey players brought golf clubs to the hotel room to further intimidate her, directed the woman to shower after the sexual assault and told her to say she was sober while they videotaped a consent video.

Hockey Canada’s board of directors authorized the maximum amount of the $3.5-million lawsuit to be paid out, according to testimony at the parliamentary committee.

Talach revealed new details to CBC News on Monday about his client’s non-disclosure agreement. He said the agreement contained a “communication plan” that gave his client some “flexibility to say what she wanted to say.” The agreement allowed Talach to make a written statement consistent with her wishes.

“She didn’t really want to be part of the media and she doesn’t want to add to this debate publicly,” Talach told CBC News.

He said the non-disclosure agreement was mutually sought because his client from the beginning was “adamant” that she didn’t want to “add to a public spectacle.” He said his client also chose not to name the hockey players involved in her lawsuit.

Talach said there is no legal non-disclosure agreements that would prevent a complainant from reporting sexual offences to police.

“You can’t buy your way out of a criminal investigation,” he said. “Nor can a NDA prevent discussing the incident when seeking medical, counselling or financial advice. Those are typical exceptions.”

No other requests to be released

The complainant at the centre of the case spoke out publicly for the first time last week to the Globe and Mail and said she felt “vulnerable and exposed” since May when her allegations went public.

The woman wanted to set the record straight about information that continued to be reported in the media about her case that was inaccurate, said Talach.

Talach said in a statement last week that his client has fully co-operated at all times with a police investigation into her case, despite Hockey Canada originally saying she didn’t.

CBC News asked Hockey Canada if any complainants have come forward and asked for their non-disclosure agreement to be withdrawn since executives testified last month.

Hockey Canada said since July 27, “no complainant who received settlements have asked to be released from any confidentiality terms in their settlement agreements.”

Have a story or news tip about the Hockey Canada scandal? Confidentially email ashley.burke@cbc.ca