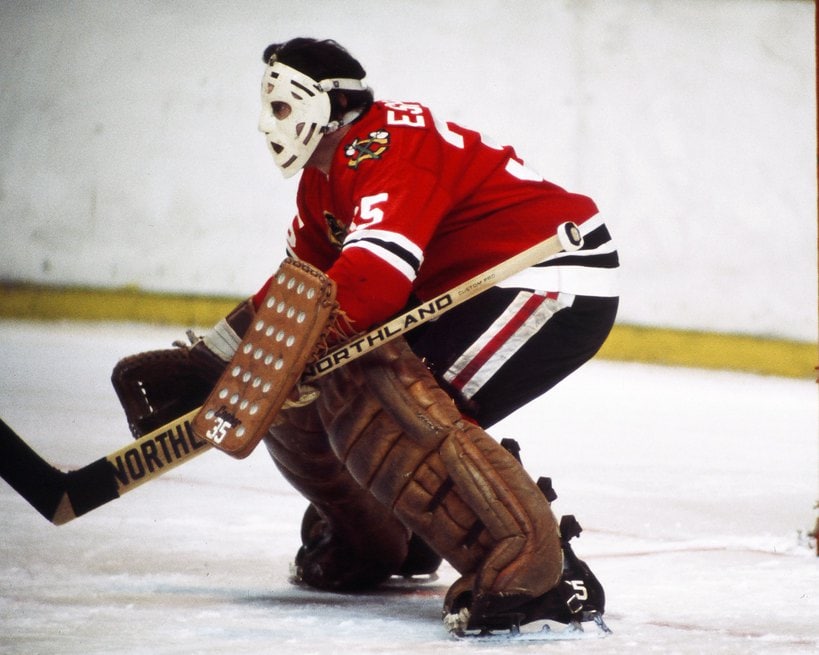 Aug. 10 has been both a hectic and sad day in NHL history, as Hall of Famer and Chicago Blackhawks legend Tony Esposito passed away in 2021. In other news, a relocated team got its new identity and logo and an expansion team made its first-ever trade. Finally, a coaching change was made, and two future successful head coaches found new homes during their playing days.

The world mourned the loss of another great hockey player and human being on Aug. 10, 2021, when it was announced that Esposito had passed away at the age of 78 after a brief battle with pancreatic cancer. The former Black Hawks star was a fixture in the NHL for 16 seasons as he retired at the age of 40 with a Calder Trophy and three Vezina Trophies.

Although Esposito didn’t start his career with the Black Hawks, he played 873 of his 886 career games with them and finished with a 2.93 goals-against average (GAA) and .906 save percentage (SV%) along with 74 shutouts. He remains the winningest goaltender in Blackhawks history with 418 victories and is the all-time leader in shutouts (74), saves (24,376) and games played (873).

After Esposito retired in 1984, he was inducted into the Hall of Fame in 1988 along with Guy Lafleur, George Hayes, Buddy O’Connor, Brad Park and Edward Snider. His No. 35 was also retired by the Blackhawks in November of that same year. Finally, he was named one of the “100 Greatest Players in NHL History” by the NHL in 2017. Since March of 2008 and up until his passing in 2021, he had served as the team’s ambassador.

Avalanche Get Their Identity

On Aug. 10, 1995, the former Quebec Nordiques officially named themselves the Colorado Avalanche and revealed their new logo and team colors. The franchise was given approval by the league to relocate to Denver on June 21, 1995.

The team’s first year in Colorado was one for the ages. In December of 1995, they traded for future Hall of Fame goaltender Patrick Roy. He was the final piece in a championship puzzle as the season concluded with the team raising the Stanley Cup for the first time in franchise history.

The Mighty Ducks of Anaheim completed the first trade in franchise history, on Aug. 10, 1993, about two months before beginning their inaugural season. They sent a third-round pick to the Montreal Canadiens for forwards Todd Ewen and Patrik Carnback, who had won the Stanley Cup earlier that spring.

Both players spent the next three seasons with the Ducks. Ewen scored 13 goals and 25 points in 153 games, while Carnback scored 24 goals and 62 points in 148 games. The Canadiens used the third-round pick to select forward Chris Murray. He had seven goals and 13 points in 107 games with Montreal. He was traded in 1997, along with Murray Baron, to the Phoenix Coyotes for defenseman Dave Manson.

The Vancouver Canucks named Rick Ley their new head coach on Aug. 9, 1994, their 12th in franchise history. The move is made because Pat Quinn gave up his duties as head coach to focus on being the team’s general manager.

This move meant that both teams from the 1994 Stanley Cup Final made coach changes since the championship series. Just 24 hours earlier, the New York Rangers named Colin Campbell as Mike Keenan’s replacement.

Ley went 18-18-12 in the lockout-shorten season of 1994-95. The Canucks beat the St. Louis Blues in seven games to advance to the Western Conference Semifinals, where they were swept by the Chicago Blackhawks. Quinn fired Ley with just six games remaining in 1995-96 and returned behind the Canucks’ bench. He hired Tom Renney in the offseason.

The Rangers signed undrafted free agent Peter Laviolette to an NHL contract on Aug. 10, 1987. During the 1988-89 season, Laviolette played 12 games with the Rangers and went scoreless. He later became better known for being a very successful head coach. His first NHL head coaching job came with the New York Islanders in 2001. He won the Stanley Cup with the Carolina Hurricanes in 2006 and took both the Philadelphia Flyers (2010) and Nashville Predators (2017) to the Stanley Cup Final.

On Aug. 10, 1993, the Florida Panthers signed free agent Jody Hull after spending the previous season with the Ottawa Senators. He played in 281 games for the Panthers over the next five seasons, scoring 56 goals and 100 points. In January of 1998, he was traded to the Tampa Bay Lightning, with Mark Fitzpatrick, for Dino Ciccarelli and Jeff Norton.

The Dallas Stars were awarded Peter Zezel and Grant Marshall, on Aug. 10, 1994, as compensation for the Toronto Maple Leafs signing free agent Mike Craig. This deal worked out better for the Stars as Craig scored 20 goals and 50 points in his two seasons with the Maple Leafs. Zezel only played 30 games for the Stars, but Marshall played in 402 games over seven seasons, scoring 52 goals and 134 points.

The Rangers signed free-agent center Michael Nylander on Aug. 10, 2004. This was the veteran’s seventh different team. He scored 49 and 162 points in his 160 games in New York. His sons Alexander and William are currently playing in the NHL with the Blackhawks and Maple Leafs.

The Pittsburgh Penguins acquired goaltender Jocelyn Thibault from the Blackhawks on this day in 2005 for a fourth-round draft pick. Thibault was originally drafted by the Nordiques with the 10th overall pick of the 1993 NHL Entry Draft. He was part of the return in the 1995 trade for Roy, mentioned earlier. He spent two seasons with the Penguins and went 8-17-5 with a .894 save percentage (SV%) and 3.52 goals-against average (GAA).

Former Canucks head coach Travis Green played 970 games in the NHL as a center before moving behind the bench. On Aug. 10, 2006, he signed with the Ducks. This was his second stint with the team as he played in 101 games between 1998 and 1999, scoring 18 goals and 46 points. His second time around with the Ducks, he only lasted seven games before he was claimed off of waivers by the Maple Leafs.

3 Predators Storylines to Follow Heading Into 2022-23
What to know for Canada’s women’s hockey world title defence
Trevor Zegras on getting ‘The Zegras’ into NHL 23, what he’s planning next
After career year, Gawdin excited to join Ducks
Devils GM Displaying His Values Through Defensive Upgrades