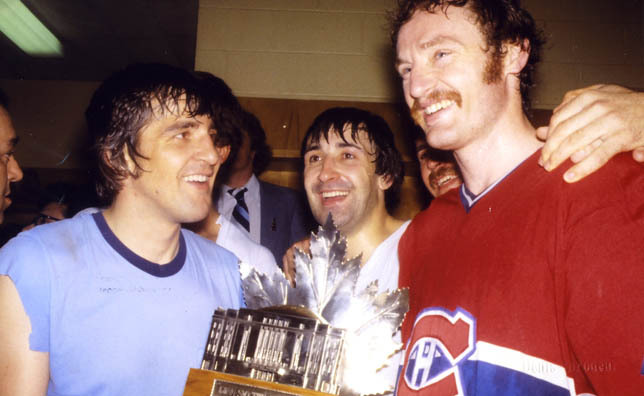 A Hall of Fame defenseman announced his retirement on this date, although he did not exactly spend much time away from the ice. Also, a long-time National Hockey League coach and executive passed away after a long battle with cancer. It is time for our daily trip back through the decades to relive all the best moments from Aug. 12.

Hall of Fame defenseman Serge Savard announced his first retirement on Aug. 12, 1981. This came after he played 917 games with the Montreal Canadiens over 15 seasons, where he scored 100 goals and 412 points while posting an unreal plus-497 rating. He was a member of seven Stanley Cup championship teams and won the Conn Smythe Trophy in 1969 for being the most valuable player of the postseason.

Retirement did not last very long for Savard. His former teammate with the Canadiens, John Ferguson, had become the general manager of the Winnipeg Jets. When the Canadiens failed to put Savard on the voluntary retirement list, Ferguson picked up his rights in the 1981 re-entry draft.

Ferguson talked Savard into playing for the Jets, and they had a 48-point improvement during the 1981-82 season. They qualified for the Stanley Cup playoffs for the first time in franchise history. Savard returned for the 1982-83 season, and the Jets made it to the playoffs for a second straight visit. He retired for good after the Jets were swept in the first round by the Edmonton Oilers. Less than three weeks later, he was named the new general manager of the Canadiens.

Long-time NHL head coach and executive Bryan Murray lost his battle with colon cancer on Aug. 12, 2017. He was 74.

Murray began his coaching career in 1976 when he became the head coach of the Rockland Nationals in the Canadian Junior Hockey League (CJHL). He moved to the Regina Pats in the Western Hockey League (WHL), winning the 1980 Memorial Cup. This earned him an American Hockey League (AHL) head coaching job with the Hershey Bears the following season.

He was promoted to the NHL during the 1981-82 season when he was named the head coach of the Washington Capitals. He won the 1984 Jack Adams Award for being voted the best coach in the league and remained behind their bench until 1990. He coached 1,239 games in the NHL with the Capitals, Detroit Red Wings, Florida Panthers, Mighty Ducks of Anaheim, and the Ottawa Senators, who he took to the 2007 Stanley Cup Final.

The Pittsburgh Penguins signed center Warren Young on Aug. 12, 1983. Young was originally drafted by the California Golden Seals in the 1976 NHL Entry Draft. He did not make his NHL debut until 1982, at the age of 26, when he appeared in one game for the Minnesota North Stars. After playing 15 games for the Penguins in 1983-84, he exploded the following season, scoring 40 goals and 72 points in 80 games.

Young signed with the Red Wings in July of 1985. He scored 22 goals and 46 points in 1985-86 before being traded back to Pittsburgh for cash. He played in 57 games over the next two seasons for the Penguins, racking up eight goals and 21 points.

On Aug. 12, 1985, the Toronto Maple Leafs signed free-agent winger Marian Stastny. He had spent the previous four seasons playing with his brothers, Peter and Anton, on the Quebec Nordiques. Stastny played one season with the Maple Leafs, scoring 23 goals and 53 points in 70 games. He spent the following season with HC Sierre in Switzerland before retiring, playing in 16 professional seasons in Europe and the NHL.

On that same day, the Red Wings signed defenseman Mike McEwen. He spent the previous season with the Capitals and won three Stanley Cups with the New York Islanders between 1981 and 1983. The Red Wings were one of three teams McEwen played for during the 1985-86 season. After picking up 10 assists in 29 games, the Red Wings traded him to the New York Rangers for defenseman Steve Richmond. The Rangers dealt him to the Hartford Whalers for winger Bob Crawford just 16 games later.

Free-agent forward Vladimir Ruzicka signed with the Senators on Aug. 12, 1993. He was just one year removed from leading the Boston Bruins with 39 goals and 75 points during the 1991-92 season. He played in just 42 games for the Senators in 1993-94, his last NHL season, and scored five goals and 18 points.

A total of 24 current and former NHL players were born on this date. The first was Fred Lowry, who was born on Aug. 12, 1902. He played 53 NHL games with the Montreal Maroons and Pittsburgh Pirates between 1924 and 1926. The most recent Aug. 12 birthday was Colorado Avalanche forward Vladislav Kamenev, who is turning 25 today.