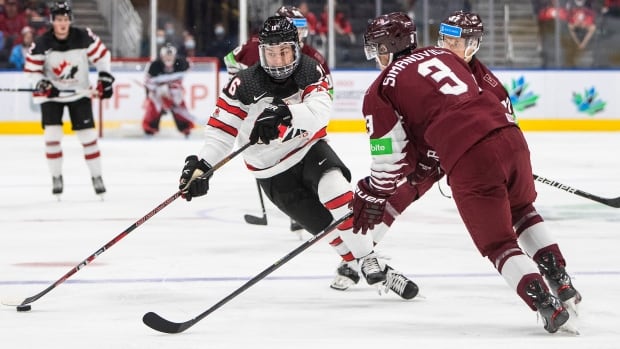 Team Canada needed some time to shake off the rust as they embarked on a late-summer campaign for gold.

Coming into their first game of the world junior hockey championship in Edmonton, many on the squad hadn’t laced up their skates for a competitive bout in several months.

The time away showed at moments, but Canada held on for a 5-2 victory over Latvia to open the tournament on Wednesday.

“I know a coach is never happy with the game, but considering the time of year and where we’re at in this tournament, I think it was good.” said head coach Dave Cameron.

The 2022 tournament is being held in August after the original iteration was called off on Dec. 29 after just four days as rising COVID-19 cases among players and officials forced games to be forfeited.

A jaw-dropping deke by Ridly Greig helped Canada knock off Latvia 5-2 in its opening game of the 2022 World Junior Championship in Edmonton, Alta. on Wednesday.

Teen phenom Connor Bedard hasn’t played a “real game” in three months, and said getting back to competition felt good.

The 17-year-old was quick to show his offensive prowess, opening the scoring in the first period and adding an assist on a second-period power-play goal.

“It always feels good to score, especially that first one of the tournament,” said Bedard, an early favourite to go first overall in the 2023 NHL entry draft.

“I think it’s always exciting no matter who gets it. So definitely felt good. And it was cool to kind of be going to the corner and seeing some fans.”

Ridly Greig and William Dufour each had a goal and a helper for Canada (1-0-0), while Lukas Cormier and Olen Zellweger also scored. Captain Mason McTavish notched two assists.

Rainers Darzins and Bogdans Hodass put away goals for the Latvians, who were coming off a 6-1 drubbing by Finland on Tuesday.

The Canadians broke out with a three-goal performance in the second but found themselves in trouble in the final frame due to a series of undisciplined penalties.

Latvia got nine seconds of five-on-three play midway through the third when Greig was called for hooking after Kent Johnson had already been sent to the box for delay of game.

The Canadians weathered being down two men and Cossa preserved the advantage with a collection of timely stops.

Earlier in the period, Latvia cut the deficit to 4-2 on a power play after Greig was called for tripping.

Just four seconds into the man advantage, Hodas — a Medicine Hat Tigers defenceman — ripped a shot off from the top of the faceoff circle, sailing the puck over Cossa’s pad.

Dufour gave the Canadians some breathing room with 5:16 to go in the third period. The New York Islanders prospect collected a slick pass from Greig and sent a quick shot in past Berzins to give his side a 5-2 lead.

Greig capped a big middle frame by collecting a pass from Dufour along the boards for an odd-man rush and streaking up the ice, using one arm to hold back Latvia’s Peteris Purmalis. With his free hand, the Ottawa Senators prospect poked the puck in past Berzins at the 17:16 mark to give Canada a 4-1 lead.

“It was a pretty lucky bounce,” Greig said. “And the tracker was right on me so I just tried to get it on net with one (hand).”

A power-play goal gave the Canadians a three-goal lead after Latvia captain Ralfs Bergmanis was called for slashing.

Bedard set up the play with a no-look backwards pass to Zellweger at the blue line. The defenceman wound up and fired a rocket through traffic, finding the back of the net 16:17 into the second.

Minutes earlier, Cormier scored with the man advantage after Dans Locmelis was called for roughing.

Joshua Roy calmed a bouncing puck and dished it to Cormier, who sent it sailing past Berzins from the top of the faceoff circle.

Canada’s power play looked to be in trouble on its first attempt of the tournament earlier in the period.

The man advantage saw Cossa nearly send a puck into his own net while trying to clear and Johnson come within inches of scoring an own goal. The host nation turned the puck over multiple times and Latvia registered a pair of short-handed shots.

“That was just to give the fans their money’s worth,” Cameron said.

“We stalled in our execution and hats off to Latvia, they didn’t give up.”

The Canadians went 2 for 4 on the power play Wednesday and Latvia was 1 for 5.

The host nation dominated play but Latvia scored the equalizer with less than two minutes to play in the opening frame. Darzins chipped a shot up and over Cossa stick side to make it 1-1.

Bedard opened the scoring 7:31 into the game, blasting a shot through a pair of Latvian defenders and over Berzins’ glove from the top of the slot.

With a different roster than the December tournament and a short training camp, Canada is still trying to build chemistry as the world juniors get underway, Cossa said.

“We’ve been practising but nothing’s really game speed,” he said. “So it was nice getting into the game now and just kind of fix things coming up here, practice and get ready for the rest of the games.”

The Canadians will continue round-robin action Thursday when they take on Slovakia (0-0-1).

Ticket sales for the World Junior Hockey Championships in Edmonton are below expectations as the tournament kicks of this week in the shadow of an ongoing sexual assault scandal at Hockey Canada.