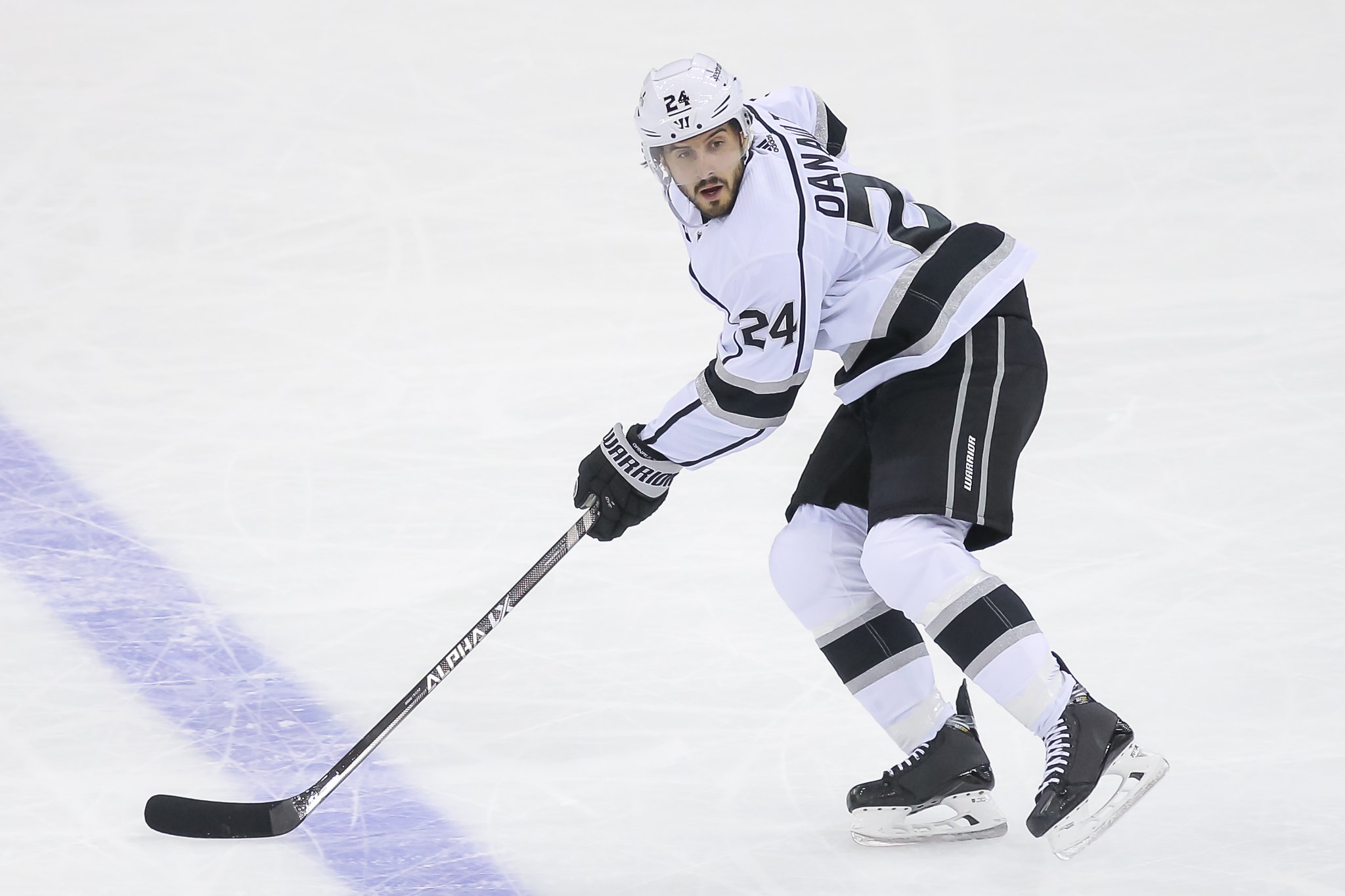 After a strong 2021-22 season, optimism is high around the Los Angeles Kings, with most fans expecting another step forward this season. After adding Kevin Fiala and losing no major pieces, the team is in a solid position to meet fan expectations and finish near the top of the Pacific Division. This team still has questions surrounding them, though, and here are three of the biggest ones heading into the 2023-23 season.

Can 2021-22 Breakout Stars Repeat Their Success?

This has to be the biggest question facing the Kings heading into next season. I’ve touched on it in the past, but it’s worth repeating. The team had several players post career seasons and smash their career highs in certain categories. To name a few, Adrian Kempe scored 35 goals, 19 more than his previous career high. Philip Danault scored 27 goals, 14 more than his career high, and Trevor Moore posted career highs in essentially every category imaginable. While he didn’t do it with the Kings, newcomer Fiala is alsocoming off a season where he finished with a career high in goals, assists, and points.

Moore and Danault repeating their success feels like the most important piece for me. So much of last season’s success came off the back of their line catching fire in the second half, and if both players regress more towards their career means, the Kings could be in trouble. It’s a safe bet that Danault remains an excellent player, but whether or not he can repeat his goalscoring from last season is the concern. If his goal total is cut in half next season, a Kings team that already struggles to score goals would be in a lot of trouble.

Fans have quickly fallen in love with Moore, for good reason, as he’s a hometown hero, but there is a possibility he doesn’t repeat last season’s success. He was just under a point-per-game player after New Year’s and was arguably the team’s best player during that period, so optimism is high surrounding him. Still, an undrafted forward establishing himself as a top-six forward at 27 years old doesn’t happen often. It’s certainly possible, and I’d listen to anyone who feels it’s even likely next season, but history doesn’t seem to be in Moore’s favor. No matter what happens, he will be an excellent player next season, it’s just yet to be seen if that’s in a top-six role.

I said Danault and Moore repeating their success is the most important piece, but one of Kempe or Fiala regressing would be disastrous. Kempe’s 35 goals were crucial for the team last season and they’re banking on Fiala adding the offensive spark they’ve been missing for a long time now. Assuming they’re on a line together with Anze Kopitar between them, expectations will be high. Perhaps controversially, I’m slightly more confident in these two repeating their success from last season. Does that mean Kempe is a lock to score 35 and Fiala will definitely be a point-per-game player again? Not necessarily.

Kempe probably needs to break 30 again, unless high drastically increases as a playmaker, and I would expect 70 points from Fiala, and those both feel like achievable goals. My confidence in these two relies on the fact that they aren’t players who suddenly popped out of nowhere. It’s two players who everyone knew had this potential finally reaching their peaks. I also think they will be excellent on a line together, as their games complement each other, and Kopitar, extremely well. There’s a lot of talk about both guys elevating their play in a contract year, only to regress back down, but I’m not too worried about that.

How Much Do the Prospects Develop?

So much of the conversation surrounding the Kings in recent seasons has been about their elite prospect pool and now is when the team should start reaping the benefit of that pool. Last season, players like Sean Durzi, Mikey Anderson, and Arthur Kaliyev put together strong seasons, but the team will need more in 2022-23 from several prospects. The big name who needs to see real improvement is, of course, Quinton Byfield.

I’m sympathetic to what was a tough 2021-22 campaign for Byfield, which started with a nasty ankle break, but there has to be big improvements this season. That doesn’t have to be him putting up huge point totals either, there just needs to be real signs of progression. He was solid defensively last season but left a lot to be desired offensively. There needs to be more of a spark from him next season and fewer bobbles with the puck in open ice. Assuming he plays third line and second power-play minutes next season, somewhere around .5 points-per-game and stretches of brilliance would be a success in my eyes.

I left Durzi and Anderson out of the breakout stars section so I could talk about them here. Both of them did have breakout seasons in 2021-22, but are also still developing prospects who should continue to grow. Getting more growth out of both Anderson and Durzi would be huge for the team. Anderson proved to be a legitimate top-pairing defenseman last season and took a step up in the postseason. If he can replicate his playoff performance across all of this season, the Kings will have a truly dominant top pairing they can rely on to eat up significant minutes.

Durzi came out of the gates very hot, fitting right into the lineup after his call-up early in the season, and earned his spot on the roster. His play dipped a bit toward the end of the season, but a lot of that was due to him being moved up the lineup after Drew Doughty’s injury. He should be returned to a more fitting third-pairing role again and I’d expect him to flourish. He’s an excellent puck mover and power-play quarterback and in a more sheltered role, he can be a massive positive for this team. Any improvement on his defensive game will be massive and allow the Kings to use him in more difficult situations. Both Anderson and Durzi are still unsigned at the time of writing, but I’m convinced they’ll both get signed.

The Kings’ best rookie forward last season was definitely Arthur Kaliyev and I’m expecting a big 2022-23 season coming up. Fans know what he can do offensively with his world-class shot, but it was his 200-foot game that impressed last season. Playing in the bottom six, he took huge strides in his overall game and is not the liability many feared he would become. Assuming he’s given more power-play time, and his potential linemate in Byfield improves, 20-plus goals seem achievable for Kaliyev. I also have a hot take surrounding him for 2022-23, but we’ll save that for a later date.

There’s also a large group of prospects who have the opportunity to fight for a roster spot next season. Rasmus Kupari, Gabe Vilardi, Tobias Bjornfot, and Jordan Spence all played 20 or more games with the Kings last season, while Jacob Moverare grabbed 19. All of these players will be hoping to earn a roster spot for next season and all have a shot to force their way on. I would expect Kupari, Spence, and Bjornfot to start the season in the American Hockey League (AHL), because they’re waiver exempt, but all three have the potential to make the team.

There are also a few wild cards in the mix, with players like Alex Turcotte, Samuel Fagemo, and Brandt Clarke all possessing the talent to surprise everyone and make the roster. Given the team’s logjam of players right now, I’d be surprised if any of them forced their way onto the roster, but it’s far from impossible.

Can Cal Petersen Bounce Back?

Cal Petersen’s $5 million extension kicks in this season, and he’ll need to be much better than he was in 2021-22 if he wants to prove he is worth anywhere near that amount. Last season was supposed to be when Petersen took the net from Jonathan Quick and ushered in a new era for the Kings in goal, but that never happened. He started the season as the team’s No. 1 but didn’t hold it for long, as he struggled and Quick thrived. The pressure of taking the No. 1 spot seemed to be too much for Petersen last season, but the expectations will only rise with his extension kicking in this season.

Quick is still the starter, so if Petersen doesn’t bounce back, the Kings will be okay in the short term, but continuing to rely on a 36-year-old Quick, who’s had serious injury problems in the past feels like playing with fire. If Petersen can’t improve, the team is also stuck paying him $5 million for the next three seasons, limiting how much they can improve in net. I’ve been an advocate for bringing in a young goalie prospect for a while now, and a faltering season from Petersen will only make that more important.

Optimism Should Be High Despite These Questions